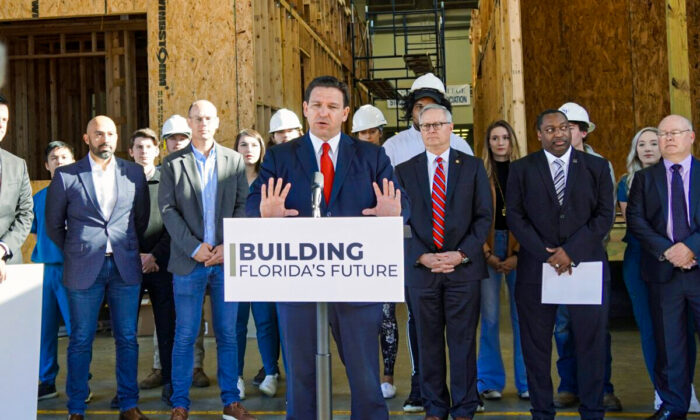 Florida lawmakers plan to vote Wednesday on whether to extend a law that makes it difficult to sue health care facilities for their treatment of COVID-19.

The law that’s set to expire, unless the legislation passes to extend it, also protects facilities from being sued by patients who become infected with COVID-19 in the facility.

Florida is one of many states across the country that has enacted or tried to enact laws to shield medical professionals from liability related to COVID-19. All 50 state governors were urged to put the protections in place by the federal government shortly after the pandemic began nearly two years ago, according to the American Medical Association (AMA).

That can lower the “standard of care” in health care facilities, Laura Youmans, an attorney and lobbyist for the Florida Justice Association trial lawyers group, told CBS Miami.

And that’s what concerns a Florida lawyer who leads a nationwide network of attorneys loosely working together on pandemic-related cases.

“Even though the original liability shield for hospitals was well-intentioned, it knee-capped lawyers in our ability to help desperate citizens whose loved ones are in crisis,” said Jeff Childers, of Childers Law in Gainesville, Fla.

Childers took on Mayo Clinic Florida in December as part of a team representing the family of Dan Pisano, a patient in the Jacksonville hospital. Though Pisano was on a ventilator and Mayo Clinic doctors said he had only a slim chance of survival, the hospital repeatedly said no to the family’s pleas to try other medications, including ivermectin.

When the family filed a lawsuit aiming to force the hospital to cooperate, an outside doctor testified that the treatments they’d requested still could save Pisano’s life. But Mayo Clinic attorneys fought vigorously. Ultimately, the family’s wishes were denied by the court, then denied again on appeal, and Pisano passed.

Since then, numerous families have contacted attorneys in Childers’ network, begging for help in similar battles with hospitals, he says. Other families and attorneys from around the country have contacted The Epoch Times, as well, sharing stories about the treatment of COVID-19 patients they say is negligent at best, and abusive, at worst.

“If this bill becomes law, it will be a disaster for Florida,” Childers said.

Making it difficult to sue hospitals in cases of wrongdoing “deletes all of a patient’s leverage,” Childers said. “We must have a balanced solution, not a one-sided grant of absolute immunity” for hospitals.

The immunity “makes it nearly impossible to sue a hospital for malpractice, so long as the hospital can say they’ve followed CDC guidelines” in the treatment of COVID-19, Childers said.

He questions why the measure seems to be moving through the legislative process so quickly. In mid-January, Florida Senate passed SB 7014 in a 22-13 vote. One Democrat voted with Republicans to approve it.

On Wednesday, the state’s House of Representatives is scheduled to vote on that chamber’s identical version of the measure, HB 7021. If passed, the last step would be to put the legislation on the desk of Gov. Ron Desantis. His signature would officially extend the protections for health care facilities.

The Republican sponsors of the initiative, Sen. Danny Burgess and Rep. Colleen Burton, didn’t respond to requests for comment.

Burgess said health care providers should not be “looking over their shoulder” and worrying about lawsuits as they care for patients and residents amid the pandemic, the Tampa Bay Times reported.

But Childers is counting on a veto by DeSantis to put an end to the move to extend the special protections.

“He’s the only thing that can stop it at this point,” Childers said. “The governor’s got to veto it!”

DeSantis has spoken recently on the need for legislation to better ensure patients’ rights. He’s argued that patients should be able to try medications they think could help. A loophole in the federal Right to Try Act only allows patients to try certain medications, not already FDA approved, after all other others have failed, and when no clinical trials are available. That’s why Right to Try doesn’t allow the use of ivermectin and hydroxychloroquine. Those drugs already are FDA-approved, just not for use in the treatment of COVID-19.

DeSantis also has spoken recently about the need for legislation to prevent hospitals from blocking visits of family members, a practice that became common once the pandemic began.

“COVID should not be used as an excuse” for keeping patients from seeing their families, DeSantis said during a press conference on Feb. 2.

States across the country have passed or tried to pass similar laws that “severely limited families’ ability to seek recourse for lapses in COVID-related care,” KHN (Kaiser Health News), the news agency of KFF (Kaiser Family Foundation), reported in December. KFF is a nonprofit organization that tracks national health issues.

Lobbyists, including “the American Legislative Exchange Council, the U.S. Chamber of Commerce Institute for Legal Reform, American Tort Reform Association and the National Council of Insurance Legislators, helped pass a range of liability shield bills across the country,” sometimes by helping draft the legislation, a KHN review found.

In Florida, vetoing bills to extend special protections for health care providers would put DeSantis at odds with his own party at a time when he’s seeking reelection. Not vetoing the bills could put him in a bad spot with conservative voters, who’ve loudly decried hospital policies during the pandemic.

After DeSantis signed bills in November banning mask mandates and making it difficult to impose vaccine mandates in Florida, Childers rallied the 80,000 followers of his daily coffeeandcovid.com blog to send thank you contributions to the governor’s reelection campaign. About $60,000 in small donations poured in, marked in a way that could be identified as being associated with the effort, an insider with the governor’s reelection campaign told The Epoch Times.

Childers called on blog followers again to send a similar thank you barrage of donations to DeSantis to signal appreciation for his appointment of State Surgeon General Joseph Ladapo. Ladapo, who still must make it through an Ethics and Elections Committee hearing on Feb. 8 before facing the full state senate, is popular with conservatives because of his affiliation with America’s Frontline Doctors, a group that fights against vaccine mandates and has promoted treatments for COVID-19 including the use of ivermectin. For the same reasons, Ladapo, whose appointment would also make him secretary of the Florida Department of Health, has been vehemently opposed by Democrats.

Donations cheering the appointment of Ladapo amounted to “a ton of money,” a DeSantis campaign insider told The Epoch Times.

DeSantis did not respond to requests for comment on the extension of the protections for health care providers.