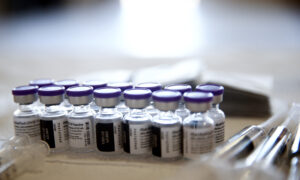 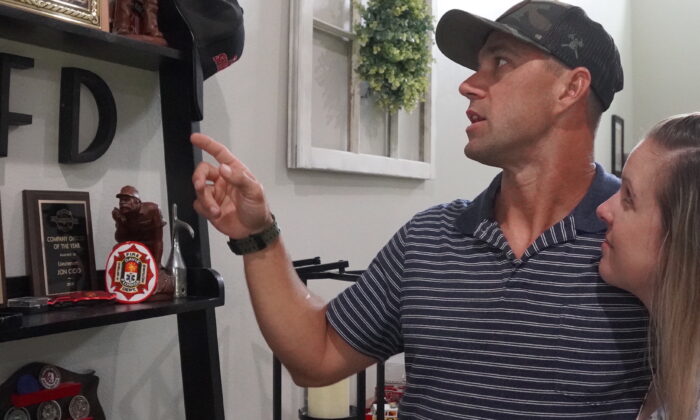 Jon and Jennifer Cicio look at Jon's accomplishments as a 17-year firefighter for the city of Gainesville, at his home in Gainesville, Fla., on Sept. 17, 2021. (Jann Falkenstern/The Epoch Times)
Vaccines & Safety

PUNTA GORDA, Fla.—When Hurricane Dorian decimated The Bahamas in September 2019, he answered the call; when the Surfside condominium towers fell in June, he answered the call. It’s what he does and what he loves to do­. But Jon Cicio is ready to give it all up to stand on principle.

On Aug. 5, the city of Gainesville narrowly voted through a “vaccinate or terminate” policy for its employees. As a result, Cicio and other first responders for Gainesville, through their attorney Jeff Childers, have filed a brief for emergency injunctive relief. On Monday, Judge Monica Brazington of the Eighth Circuit for Alachua County will hear from both sides of the issue. For Cicio, the choice to join the lawsuit was clear.

“The clock is ticking on these people,” Childers told The Epoch Times in a one-on-one interview. “This is unconstitutional.”

Cicio said he is still researching the vaccine and has not made up his mind whether he will get the vaccine or not. He said if the powers that be would leave people alone to make up their own minds about what works for them, they might get different results.  However, “threatening people’s livelihoods” is not the way to go.

“I had COVID, so has the rest of my family,” he said. “From the research I have read, I have natural immunities because I had the virus, and I am afraid to put something else in my body that some people have had reactions to.”

Cicio has a lot more than a job on the line if he does not comply with the city’s demand. He has 10 faces looking to him for support. Jon and his wife have 10 children: five biological children, four adopted, and an 8-month-old who is still a foster child but will soon join the Cicio clan legally.

“Daddy, daddy, daddy’s home,” screamed four little voices in unison during a recent Epoch Times visit to the Cicio home. The patriarch entered his newly custom-built home that sits on a picturesque lot where one would envision a rural Florida home to be. Picturesque oak trees tower above and around the Cicio home with Spanish moss slowly swaying in the breeze, a peaceful and relaxing scene. The home was built with love, sweat, and sometimes tears by Cicio, his 18-year-old son Eli, and the brotherhood of the Gainesville Fire Department. Next door sits their old home that is approximately 1,500 square feet with one bathroom. Cicio said it was bursting at the seams. The couple decided to build on their adjoining lot that they hope will sustain everyone until each child leaves the nest.

Jon and Jennifer Cicio have called Gainesville home their entire lives and have been married a few months shy of 20 years. Now, 39 and 38 years of age, respectively, the couple have five children of their own: Eli, 18; Katelayn, 16; Noah, 11; Audrey, 9; and Taylor, 7. Through the years, four other children—Jade, 11; Wyatt, 5; Maya, 3; and Thomas, 2—came into their lives through fostering and were ultimately adopted. An 8-month-old girl, who is a sibling to one of their other adopted children, recently came into their home and will soon be adopted by the couple.

Their faith keeps them grounded as a family. It is the core conservative values that the Cicios were raised on and that they are passing on to their children.

“God hasn’t let me down yet,” Cicio said as he clutched 2-year-old Thomas tightly to his chest. “The city of Gainesville is not my provider, God is.”

Jennifer Cicio is bitter toward the city because of what they have done in the form of mandates to her husband and the others they call their “extended family.”

“[Jon’s] the one who leaves our house when there is an emergency,” she said, tears welling in her eyes. “They [the city] don’t appreciate him the way they should. I feel betrayed.”

However, Jennifer isn’t worried and relies on her faith to see her through.

“I am not worried,” she said. “We will make it because my husband will find something to do, he’s talented. Being a member of the Gainesville Fire Department is what he loves to do.”

Jon Cicio and his “band of brothers” of the Gainesville Fire Department are called upon, whether it’s in their own community or whether the call comes from across the ocean; they are there to lend their hands and give “help to those in need,” he said.

Cicio has been involved in two search and rescue missions, including for the 2019 hurricane that decimated The Bahamas.

“The Gainesville Fire Department responded to the island after Dorian hit,” he explained as he pointed to a wall plaque that pictured Cicio and his fellow rescuers in a newspaper account, digging for any signs of life. “It was horrible, and yes, we recovered dead bodies.”

When the Surfside condominiums collapsed in June, again, Cicio and other members of the Gainesville Fire Department were sent by the city to help and represent.

“When we went, we understood that there would probably be no survivors,” he said. “But we prepared ourselves for that and kept it professional.”

Part of a wall in their living area is dedicated to awards he has received over the years. His children will go over and look at them and can talk about what each represents to them.

Nine-year-old Audrey picked up a piece of rebar that was displayed on the shelf and stared at it pensively.

“My daddy brought this back on his last trip,” she said. “It is hard to believe that this is what was holding up that great big building.”

Cicio had brought that back from the surfside condominium scene to show his family what he was digging through in an effort to find human lives that he never found—only the smell of death and dust, he recalled.

“It was recovery at that point,” he recalled, gently taking the rebar from his daughter and returning it to its resting place on the shelf. “But nothing could prepare us for the betrayal of the city of Gainesville because they always said we were heroes.”

During the pandemic, first responders nationwide have been described as heroes by people of all walks of life. But because of Gainesville’s new vaccine mandate, they are now being hailed as “selfish” by the very city that sends them to be a positive reflection in other areas when there is a crisis.

“We’re good enough to be sent to other areas to help out because we represent the city well,” Cicio said. “But now we are being called selfish because we don’t want a shot?”

Other people have their own reasons for not wanting to be injected, Cicio explained.

“People have to be their own advocates,” he said. “If we do not stand up and say, ‘Enough,’ it will give them a license to go further and further until this country is unrecognizable. That’s why I fight; I fight for my children’s future and to show my kids that it’s the right thing to do.”