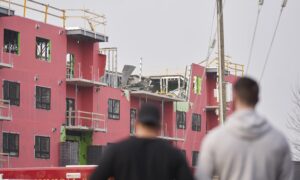 A 12-story building collapsed in two phases on Thursday in Surfside, Florida, leaving at least one dead and an undetermined number of residents trapped in the rubble and debris.

Dozens of survivors have been rescued and authorities are still working to get more people out.

As of midday, almost 100 people were still unaccounted for, according to authorities, meaning that the final death toll might be much higher. The exact number of people who were in the building at the time of the disaster is unknown.

Rescuers were seen reaching for a trapped minor whose parents apparently perished after the collapse.

One woman’s leg had to be amputated to pull her out from the wreckage. She was rescued along with another child, the Miami Herald reported.

After touring the site, Gov. Ron DeSantis said that the footage taken did not reflect the reality of the situation.

Rescue crews are “doing everything they can to save lives. That is ongoing, and they’re not going to rest,” the governor said.

DeSantis later in the day declared a state of emergency (pdf) in Miami-Dade County to enable assistance from the Federal Emergency Management Agency (FEMA) for those displaced by the building collapse. The move comes after President Joe Biden said earlier that the federal government and FEMA would provide help once DeSantis formally declares the emergency.

“They are down inspecting what they think is needed but I’m waiting for the governor to … declare an emergency,” Biden told reporters Thursday afternoon. “We are on top of it. We are ready to move from the federal resources immediately, immediately, if in fact we are asked for it.”

Rescuers formed teams of about a dozen people and entered the debris with dogs and equipment, with teams ready to replace them after they get fatigued, said the state’s fire marshal, Florida Chief Financial Officer Jimmy Patronis.

“They’re not going to stop just because of nightfall,” Patronis told WPLG. “They just may have a different path they pursue.”

The cause for the collapse has not yet been released by the authorities. Footage of the incident shows the center of the structure first collapse and then another lateral part of the building, which was closer to the sea, falling down seconds later, raising a massive dust cloud that covered the surrounding neighborhood.

Work was being done on the building’s roof.

Miami-Dade County Mayor Daniella Levine Cava said she earlier received a call from Biden, who offered federal aid. Hotels opened to some of the displaced residents and deliveries of food, medicine, and more were being hastily arranged. Rescue officials tried to determine how many people might be missing and asked residents to check in with them.

About half of the building’s roughly 130 units were affected, the mayor told a news conference. Rescuers pulled at least 35 people from the wreckage by mid-morning, and heavy equipment was being brought in to help stabilize the structure to give them more access, Raide Jadallah of Miami-Dade Fire and Rescue said.

“It was devastation,” said Jennifer Carr, who was sleeping in a nearby building. “People were running and screaming.”

The tower has a mix of seasonal and year-round residents, and while the building keeps a log of guests, it does not keep track of when owners are in residence, said Surfside Mayor Charles Burkett. The Argentine Consulate in Miami said nine people missing in the collapse were from Argentina.