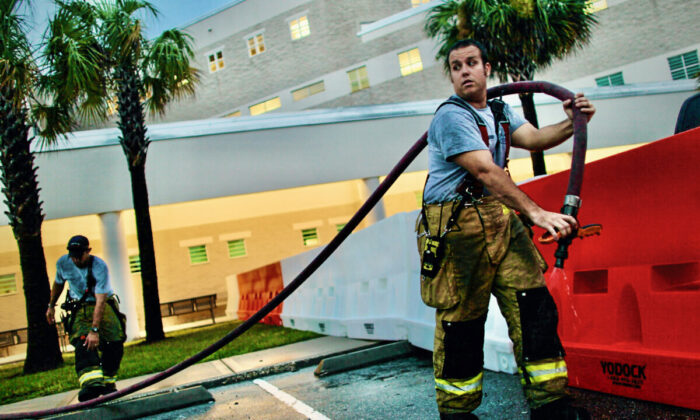 Orange County firemen use a hose to fill protective barriers with water in front of the booking and release center at the Orange County Jail July 15, 2011 in Orlando, Florida. (Joe Raedle/Getty Images)
US Features

ORLANDO, Fla.—Firefighter, paramedic, dispatcher, and EMT morale in Florida’s fifth most-populous county is so low due to a vaccine mandate that public safety is being compromised, first responders say.

About 500 of the men and women who fight fires and rush to medical 911 calls are receiving written reprimands in their employment files for refusing to take the vaccine for the CCP (Chinese Communist Party) virus, commonly known as the novel coronavirus.

Many say they fear the vaccine because they’ve responded to daily calls to the homes of people who’ve been seriously harmed or died shortly after the injection, says a spokesman for the group, firefighter Jason Wheat. Others object because they feel they should have a right to choose what to put in their bodies or have religious objections.

The resulting infighting over who’s been vaccinated and who hasn’t is causing so much strife within the department that many first responders are distracted, stressed, and unable to work well as a team, Wheat said. The Epoch Times spoke with another firefighter, a lieutenant, and a firefighter who is married to another firefighter. All described intense pressure at work that has brought about exhaustion, depression, family troubles, harassment, and a frightening lack of cooperation and teamwork. Two expressed dismay about three recent suicides among department workers. They blamed the stress that has plagued the department since the pandemic began.

Wheat and 42 colleagues are suing Orange County. An attorney for the group filed a motion on Oct. 1 asking for an emergency injunction to block the county from requiring employees to submit to unwanted vaccinations. Employees say they were at first told that they’d be fired if they didn’t take the vaccines. Later, the county changed the plan to issuing written reprimands, employees said. The department would not have been able to provide services properly if there was a sudden loss of 500 employees, about 38 percent of the department, the firefighter said.

The lawsuit filed by employees challenges an executive order by Orange County Mayor Jerry Demings. The order required employees, including those in the Fire and Rescue Department, to receive at least one shot by the end of last month. Attorneys for the county have declined to comment on the matter because litigation is pending.

The conflict between Orange County and first responders further escalated on Oct. 19, when a fire battalion chief, one of the plaintiffs in the lawsuit, was fired for refusing to discipline department employees listed as unvaccinated.

Stephen Davis “was terminated on the grounds of failure to follow a direct order,” confirmed Orange County Fire Rescue spokeswoman Lisa McDonald. “The insubordination was the result of his refusal to issue disciplinary action on Oct. 5.”

Davis was hired in April of 2007 and promoted to Battalion Chief in 2018, she said, declining to comment further.

Davis has said he refused to issue written reprimands to people under his command because the vaccine requirement is unlawful. Some employees on the list for disciplinary action had already submitted religious exemptions that were approved, he said. Supervisors told him the employee records would be rectified later.

His firing caused department morale to sink even lower, said Wheat, a 17-year veteran and Florida’s 2019 Firefighter of the Year.

“It’s the lowest I’ve ever seen it,” he says. Others in the department echoed his assessment.

Unvaccinated workers officially are required to be tested for COVID-19 once a week, he said. But sometimes, they’re forced to test a second time. And the tests often are past their expiration date, he and others told The Epoch Times.

The tension between the vaccinated and unvaccinated grows daily, fire and rescue employees said. As a result, the number of firefighters calling in sick is up, which forces colleagues to work extra-long shifts that leave them exhausted. Some are quitting and taking jobs elsewhere.

“The people of Orange County are being hurt,” Wheat said. Fire and rescue workers “are fighting with each other, not concentrating on their jobs. Safety is a problem.

“We love this job so much because we want to help people. But when you’re distracted, it’s not good for the public.”

“We’re with the people on our shift more than our families,” said Wheat, 43. “It’s a shame. This has destroyed our department.”

Some have told him the strain has destroyed their marriages.

“I’ve been getting a lot of hate mail from citizens saying, ‘Go get the vaccine — stop being a punk!’ and lots of worse words than that.”

He discovered he had the virus 16 months ago when he went in for pre-surgery testing. Tests show he has antibodies now.

“But we’re not for or against the vaccine. It’s about freedom of choice. If we’re of sound mind, we should be able to decide what we put in our bodies.”

Firefighters, paramedics, and EMTs do have good reasons to fear the vaccine, he said.

After President Joe Biden encouraged employers to mandate vaccines, first responders raced daily to 911 calls from people who had just had the shot and believed it had hurt them. Strokes, seizures, fainting, serious illness, heart palpitations, blood clots, and enlarged hearts were only some of the problems that seemed, to him and his colleagues, to be the result of a vaccination. A first responder provided The Epoch Times transcripts of notes describing the deaths of two patients who had just had the vaccine and had no other known health conditions.

In September, Wheat created the nonprofit Operation Freedom of Choice. Now, representatives of 15 fire departments and unions in Florida meet weekly to discuss the latest on vaccine mandates and how their colleagues are holding up under the pressure.

Taking up their fight is Rachel Rodriguez, a West Palm Beach attorney representing Wheat and the 42 others against Orange County.

She says the lawsuit shouldn’t be seen as partisan.

“The issue here is lawlessness, force, and tyranny,” she said. “I feel really privileged to work on this case because, my goodness, our republic is in trouble. I’m honored to be working with people who are standing up” for what they believe is right.

Rodriguez is upset that her clients worked through the pandemic, responding to calls in person when many other county workers carried out their duties working remotely from the safety of their homes. Those same first responders, who had been lauded as heroes, now have to worry about how written reprimands will affect their employment.

Orange County Fire Rescue serves more than one million residents and responded to 124,000 calls in the past fiscal year when many seeking help were experiencing serious symptoms of COVID-19.

Rodriguez questions why Orange County is still under a state of emergency, a condition Florida law allows for up to 42 days. The state of emergency that allowed Mayor Demings to issue the vaccine mandate should have expired Sept. 7, she says.

The mayor has said publicly that employees won’t be fired for not taking the vaccine.

“But my clients don’t have assurance of that,” she says. “This is lawlessness versus rule of law and order.”

One Orange County commissioner asked during a public meeting if liability for wrongful death could be imposed on unvaccinated workers of Orange County Fire Rescue for exposing “an innocent person…to something deadly.”

Rodriguez is working with a loosely affiliated group of allied attorneys around the country who are sharing files and strategies. The group was organized by fellow Florida attorney Jeff Childers, of Gainesville, who turned over his corporate law practice to other lawyers so he could focus solely on what he calls “freedom cases.” He’s been taking on and assisting in those cases without requiring a promise to pay. And he and other attorneys in the group have been helping with cases like Rodriguez’s and others around the country

Also jumping into the fray is Florida’s Attorney General Ashley Moody, who asked the Circuit Court in Orange County Wednesday for permission to file an amicus brief in the case. An amicus brief is filed to show support for one side in a case and to present additional information, such as how others will be affected by the issues addressed in the case.

“These local politicians are abusing their authority and trying to ruin the careers of so many of our courageous firefighters,” Moody said in a news release.

In a further show of support from the state, Florida Gov. Ron DeSantis and other state officials held a news conference with the chief fired for insubordination and others from Orange County.

“Your right to earn a living should not be contingent upon COVID shots,” DeSantis said. “When the vaccines first came out, we worked very hard to provide it, particularly to our elderly, but we said from Day One: we will make it available for all, but we will mandate it on none, because ultimately we want individuals to make the determinations about what is right for them.

“I want a state in which people are able to maintain their livelihoods, earn a living, and provide for their families. And if the federal government or big corporations are hurting people, then we have a responsibility to step up and lead.”

“If you ask me what is my response to the Governor or anyone else,” Mayor Demings said, “I say these simple words: bring it on.”