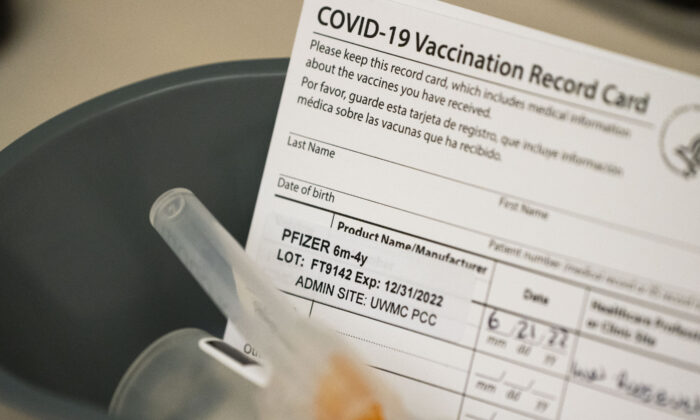 Uptake of COVID-19 vaccines has been low so far in young children, with a small fraction of those newly eligible for a vaccine receiving one, according to new data.

In a pair of moves in June, the U.S. Food and Drug Administration (FDA) and the U.S. Centers for Disease Control and Prevention (CDC) made the Moderna and Pfizer vaccines available to children from 6 months to 5 years of age, and recommended virtually every child in the age group get vaccinated.

But parents have been hesitant to get their child a vaccine, according to the newly released data.

Just 1.3 percent of eligible children under 5 have received one or two doses of a vaccine, data from the CDC show.

In many states, meanwhile, the percentage of young children getting a shot is under 1 percent, according to an Epoch Times analysis.

Taken together, the statistics underline the difficulty health authorities will have in getting babies and toddlers vaccinated with shots that have proven much worse than originally promoted.

The FDA and CDC’s independent expert panels unanimously recommended the agencies authorize and advise parents to get their children vaccinated, despite less than ideal clinical data, and the agencies accepted the recommendations.

Other outside experts, though, have been divided on the moves, particularly in light of the data.

While the Moderna and Pfizer trials triggered similar antibody counts as those triggered in the original adult trials, the efficacy against infection was substandard (Moderna) and unreliable (Pfizer). Moreover, neither trial could prove any ability to protect against severe illness.

In addition, approximately 70 percent of kids under 5 have recovered from COVID-19, giving them strong immunity against severe disease even if they contract the CCP (Chinese Communist Party) virus again. Also known as SARS-CoV-2, the virus causes COVID-19.

Those key points are driving the hesitancy from parents to get their young children vaccinated, according to Barbara Loe Fisher, president and co-founder of the National Vaccine Information Center.

“A lot of parents know most young children already have been infected and there were few or no symptoms, so they are not convinced there is a benefit to subjecting their child to the unpredictable risk of suffering a COVID vaccine reaction, especially when you can get vaccinated and still get infected and transmit the virus,” Fisher told The Epoch Times in an email.

Side effects from the vaccines include fever and heart inflammation, though the CDC and FDA say the benefits of the vaccines outweigh the risks.

Thirty-eight percent of parent respondents told the Kaiser Family Foundation in April that they would definitely not get their child vaccinated, or would only do so if it were required, with some citing concerns about safety. But 18 percent said they’d get their children vaccinated right away. The rest said they’d “wait and see.”

Some other experts say the slow uptake is to be expected.

“Parents need some time to get used to giving this vaccine to young children,” Dr. Paul Offit, a professor of pediatrics at Children’s Hospital of Philadelphia who sits on the FDA’s advisory panel, told The Epoch Times via email.

“We are pleased that over 267,000 children under the age of 5 years have obtained their first vaccination and hope to see continued uptake of this vaccine now that is available to children under five,” a spokesperson for the CDC, which has promoted vaccination for young children, told The Epoch Times in an email.

The White House did not respond to a request for comment. The Department of Health and Human Services (HHS), the CDC’s parent agency, declined to comment.

The Epoch Times canvassed all 50 states for data on COVID-19 vaccination for young children since the June 17 emergency authorization of the shots.

A number of states have had extremely low uptake so far for the youngest age group.

South Dakota has recorded 0 percent of children getting a vaccine, while just 0.1 percent of the population in Louisiana, Nevada, Tennessee, and Texas have received a vaccine.

Kentucky, Florida, Georgia, South Carolina, Idaho, and Montana are at or under 1 percent.

But altogether, the rate is much lower than for the last age group to receive emergency clearance, 5- to 11-year-olds.

If the current rate for those 6 months to 5 years of age continues, it will reach just under 2 percent for the same length of time.

“It is too early for us to determine how vaccine uptake compares between children under the age of five years and other age groups. When the Vaccination Demographic Trends page is updated in coming weeks with vaccine dose trend data for children under the age of five years, website visitors will be able to compare uptake over time between various age groups,” the CDC spokesperson said.

As of July 6, approximately 6.3 million doses for young children have been ordered from the federal government, which pays for the shots and distributes them for free, a spokesperson for HHS told The Epoch Times in an email. The administration made 10 million doses available.

White House officials signaled prior to the authorization that the vaccines might not be accepted quickly.

“We have been guided in our approach by very clear data that says that most parents want to vaccinate their littlest ones in familiar settings. We also know that many parents have questions. And we want to encourage every parent to talk to their physician, to talk to the pediatrician, to talk to the family physician,” Dr. Ashish Jha, the White House COVID-19 response coordinator, told a recent briefing.

“We also know that confidence in vaccines builds over time. And I remind people that at the start of the adult vaccination program back in December of 2020, only one in three adults said they were eager to get the shot. Today, nearly 90 percent of adults have gotten at least one shot.”

Hesitancy for Other Children

While authorities recommend vaccination for virtually all children, except for those with contraindictions, rates have lagged for the groups who weren’t able to get a vaccine at first.

Only 36 percent of children aged 5 to 11 have received at least one dose, and just 30 percent have received two doses, according to data reported by the CDC.

“Vaccination has become the number one topic of conversation all over the world during the past two years and young parents are much more educated about vaccine risk issues than previous generations. There are still huge gaps in scientific knowledge about vaccine side effects and who is at higher risk for suffering a vaccine reaction,” Fisher, the nonprofit president, said. “Until the good science is done to fill in those knowledge gaps, vaccine hesitancy is here to stay.”