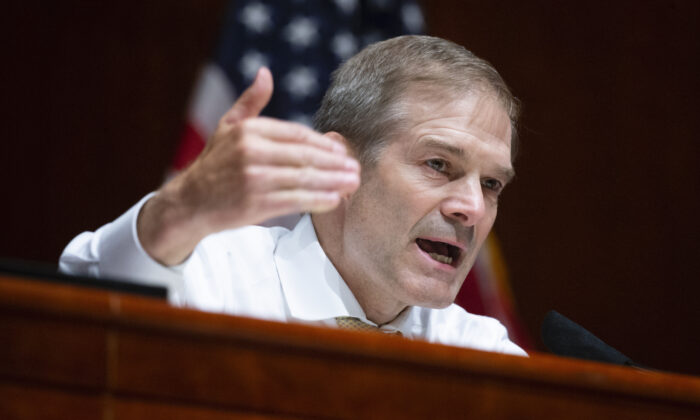 A new whistleblower has alleged the FBI is “manipulating” case files to make it seem like America has a bigger “domestic violent extremism” (DVE) problem than it does, while redirecting resources away from child sexual abuse investigations to prioritize Jan. 6 cases, according to Judiciary Committee ranking member Rep. Jim Jordan (R-Ohio).

The new whistleblower’s disclosures, Jordan said, indicate that the way the FBI’s field office in Washington, D.C. handles DVE cases related to Jan. 6 “diverge[s]” from established practice in such a way that it “overstates the national DVE threat.”

Instead of records reflecting a number of DVE cases “stemming from a single, black swan incident” in D.C. on Jan. 6, 2021, it appears on paper as if there has been a rise in DVE threats all around the country.

Jordan raised the allegations with FBI Director Christopher Wray in a letter on Monday, saying whistleblowers have contacted elected officials about “disturbing conduct” at the FBI, including “politicization within the Washington Field Office (WFO).”

This is not the first time Jordan has raised whistleblower allegations with Wray along these lines. In July, the Ohio congressman wrote to Wray about allegations supervisors were pressuring agents to “reclassify cases” as DVE even if they didn’t meet the criteria.

“Since then, new whistleblowers have come forward with concerning information about how the FBI is deliberately manipulating the way case files related to January 6 investigations are maintained in order to create a false and misleading narrative that domestic violent extremism is increasing around the country,” Jordan wrote.

According to Jordan, the whistleblower alleged “the FBI has not followed regular procedure” with Jan. 6 cases, which should all be officially led by the WFO.

Ordinarily, cases are characterized and labeled by the field office where they originate, with leads “cut,” or sent, to other field offices for specific assistance in that location.

But the whistleblower alleged the WFO has used a “manipulative casefile practice” to create the appearance of a larger number of purported DVE cases by farming out Jan. 6 DVE cases to FBI field offices in other geographic locations.

“The manipulative casefile practice creates false and misleading crime statistics,” the whistleblower alleged, according to Jordan.

“Instead of hundreds of investigations stemming from a single, black swan incident at the Capitol, FBI and DOJ officials point to significant increases in domestic violent extremism and terrorism around the United States.”

The way this is achieved, the whistleblower told Jordan, is that a task force in D.C. identifies “potential subjects” and possible locations where they reside, then sends “information packets” with instructions to open full investigations at local field offices around the country.

But in fact the local field offices are only running the cases on paper at the direction of the WFO, according to Jordan’s letter.

“In other words, the FBI’s case categorization creates the illusion that threats from DVE are present in jurisdictions across the nation, when in reality they all stem from the same related investigation concerning the actions at the Capitol on January 6,” Jordan said.

“[T]here are active criminal investigations of January 6th subjects in which I am listed as the ‘Case Agent,’ but have not done any investigative work,” the whistleblower alleged, according to Jordan’s letter.

“These allegations are consistent with disclosures we have received from other whistleblowers that high-ranking FBI officials—including a senior WFO official—are pressing front-line agents to categorize cases as DVE matters to fit a political narrative.”

Jordan also put to Wray the whistleblower’s allegations that the FBI is pulling agents off the bureau’s Violent Crimes Against Children program to prioritize Jan. 6 targets.

“In addition, the whistleblower disclosed that the FBI is sacrificing its other important federal law-enforcement duties to pursue January 6 investigations,” Jordan wrote.

“The whistleblower recalled, for example, being ‘told that child sexual abuse material investigations were no longer an FBI priority and should be referred to local law enforcement agencies.’

“Such a posture is not only a dereliction of the FBI’s mission to investigate violations of federal laws, but it is a grave disservice to the victims of child sexual abuse and other crimes that do not advance the FBI leadership’s political agenda,” he said.

Congress first empowered the FBI in 1932 to immediately investigate disappearances or kidnappings involving a child of “tender age,” which is usually 12 or younger, according to the bureau.

Jordan expressed his outrage at this part of the whistleblower’s allegations on Monday night during an interview on Fox News.

“They’re juicing the numbers and they’re cooking the books,” Jordan said. “And they’re so focused on this they’re willing to pull agents from child trafficking cases to foster this narrative … about half the country being extremists.”

“Remember, we’ve had previous whistleblowers who came to us and said that they were being pressured to label cases as ‘domestic violent extremism,'” he continued. “This whistleblower came forward and talked to us about how they’re cooking the books, making it seem like there’s cases all over the country when in fact they’re all related to Jan. 6.”

Jordan also revealed during the interview that the whistleblower, who he described as “honest” and “brave,” has now been suspended by the FBI.

“Today we learned that this newest whistleblower has been suspended from his job. So there’s retaliation going against this guy for coming forward and telling us what’s going on,” Jordan said.

The Ohio Republican noted that the FBI’s action toward the whistleblower is an indication of what could be in store if the Democrats win both the House and Senate at the November midterms.

“That’s why this election in 50 days is so darn important. The way you send a message is put Republicans in charge and then what we have to do is get tough,” he said.

Jordan pointed to the actions of the Department of Justice in “the last six weeks” as evidence of overreach by the Biden administration.

“And, oh by the way, he also signed legislation which is going to unleash 87,000 IRS agents to come harass we the taxpayer,” he added, referring to Biden.

“That happened in six weeks for goodness sake. So yeah, this election is critical when it comes to America’s freedoms, liberties, and the Bill of Rights.”

The FBI responded Tuesday to the allegations in a statement to The Epoch Times, saying the bureau “is charged with protecting the American people from a wide variety of threats, from terrorism, cyber threats, and violent crime to public corruption, hate crimes, and crimes against children.”

“Our commitment to one does not come at the expense of another,” the FBI spokesperson said, referring to allegations that resources are being pulled from child sexual abuse cases.

“The threat posed by domestic violent extremists is persistent, evolving, and deadly,” the spokesperson continued. “The FBI’s authority to investigate a case as domestic terrorism requires the existence of a potential criminal federal violation, the unlawful use or threat of force or violence, and ideological motivation of any type.”

The FBI spokesperson said the bureau does “not investigate ideology” but rather “individuals who commit or intend to commit violence and other criminal activity that constitutes a federal crime or poses a threat to national security.”

“We are committed to upholding the constitutional rights of all Americans and will never open an investigation based solely on First Amendment activity,” the bureau spokesperson said.

This report was updated with the FBI spokesperson’s comments.