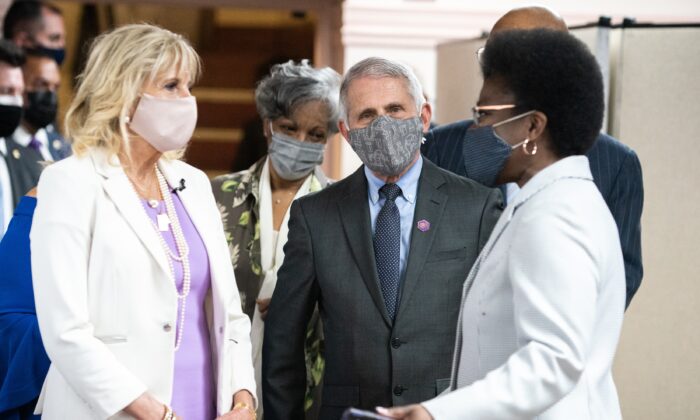 Fauci and Biden visited Abyssinian Baptist Church, a megachurch on W. 138th St. in the borough of Manhattan. People can get a COVID-19 shot there.

About 75 protesters gathered outside the church, shouting “fire Fauci” and “freedom over fear.”

The group held signs that included “‘Faucism’ is the only legal religion” and “Fauci = criminal.”

Jo Rose, one of the protesters, said that the recently released emails to and from the doctor show that he has lied.

“Nothing that Dr. Fauci said is based on real science,” she said.

Fauci, White House chief medical adviser to the president and director of the National Institute of Allergy and Infectious Diseases, has said the emails are “really ripe to be taken out of context” and has received support from President Joe Biden even as calls among members of Congress for his resignation or firing grow.

Fauci, Biden, and Sen. Kirsten Gillibrand (D-N.Y.) visited with health care workers and thanked them for their work. The first lady showed her appreciation for Fauci, introducing him as “the man, the myth, the legend!”

The group, who were all masked, made brief remarks but took no questions from reporters.

“I want to thank you all for coming, because this is how we get the word out,” Biden said.

“We want everyone 12 or older to come get vaccinated. We’re really working hard because we have to get back to life as normal. And Dr. Fauci is here and he is working hard, he is working seven days a week,” she added.

Fauci, a native New Yorker, said he’s known about the church since he was a child.

“And to actually be in this place with all of the extraordinary people who are working [here]; we’re going to end this outbreak, we’re absolutely certain,” he said. “And the vehicle to ending it is vaccination, and that’s what’s going on right here, and that’s why I’m so impressed and honored to be here.”

Fauci, during appearances on MSNBC last week, has criticized the attacks he’s facing in the wake of the email releases.

“I’m concerned about that, more because it’s really very much an attack on science,” he said on “The Rachel Maddow Show” on Friday.

He also said that some people resent what he did during the Trump administration but insisted he was “just trying to get the right information, to try and get the right data.”