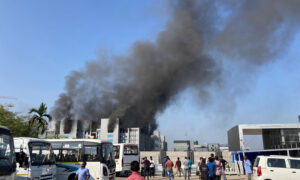 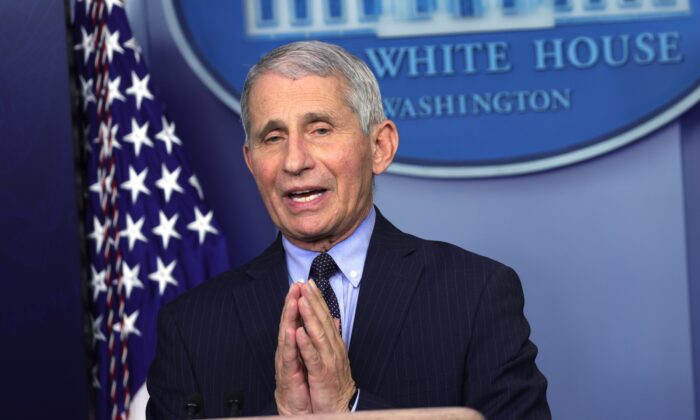 Infectious disease expert Dr. Anthony Fauci said on Jan. 21 that the Biden administration is not starting its COVID-19 vaccine distribution plan from scratch, contradicting a CNN report that claimed they were not given a plan by Trump officials.

Fauci, head of the National Institute of Allergy and Infectious Diseases, debunked a CNN report that was published hours earlier, citing unnamed Biden administration officials claiming, “There is nothing for us to rework. We are going to have to build everything from scratch.”

The report by CNN’s White House correspondent MJ Lee cited unnamed sources that alleged that the Biden administration would have to start its COVID-19 vaccine rollout from “square one.”

Hillary Clinton responded to the report’s allegations on Twitter, calling the claims “appalling but not surprising.”

But Fauci told reporters, “We certainly are not starting from scratch because there is activity going on in the distribution” during an appearance in the White House briefing room, indicating that Biden officials will continue to build on and adjust as needed the blueprint left by the Trump administration.

“We’re coming in with fresh ideas, but also some ideas that were not bad ideas with the previous administration. You can’t say it was absolutely not usable at all,” Fauci said. “It’s taking what’s going on, but amplifying it in a big way.”

Lee defended her reporting on Twitter, calling Fauci a “holdover from the Trump administration.”

Meanwhile, Sen. Lindsay Graham (R-S.C.) said reports claiming that the Biden administration is starting from square one on its COVID-19 vaccine distribution is a “lie.”

“The media should not buy the false narrative from the Biden Administration that they are ‘starting from scratch’ on vaccine distribution,” Graham wrote on Twitter. “That’s a lie. Don’t believe me, listen to Dr. Fauci.”

CNN didn’t immediately respond to a request for comment by The Epoch Times.

Biden has vowed to vaccinate 100 million Americans in his first 100 days in office against COVID-19, the disease caused by the CCP (Chinese Communist Party) virus. According to the Centers for Disease Control and Prevention, more than 37.9 million doses have been distributed as of Jan. 21 but just 17.5 million have been administered.

A day after taking office, Biden released a national COVID-19 strategy that includes working to get Americans vaccinated against COVID-19, increasing the number of tests, requiring masks in more places, reopening schools, and rejoining the World Health Organization, which Trump left because of their failure to be transparent about the COVID-19 pandemic, particularly in the early days.

Some states have struggled to quickly administer doses they’ve received from the federal government. One way the Biden administration hopes to clear the logjam is by creating more venues where people can get vaccinated, including stadiums, conference centers, and retail stores.

Along with more vaccinations, the strategy also calls for an increase in testing, calling it part of “a comprehensive national public health effort to control the virus.” The government is aiming to up the number of tests manufactured in America, with the hope of doubling test supplies.

Biden is asking Congress for $1.9 trillion to implement his plan.