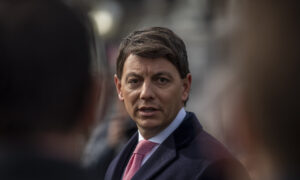 Executives from Facebook, Google, and Twitter told a Senate committee on Wednesday that stripping tech firms of Section 230 protections would stifle free speech on the internet and called for alternate regulatory solutions.

Speaking remotely before the Senate Committee on Commerce, Science and Transportation, Twitter CEO Jack Dorsey proposed such measures as requiring tech companies to publish their content moderation policies and a “straightforward process” to appeal moderation decisions, rather than repealing Section 230 of the Communications Decency Act, which shields tech companies from liability for content posted on their platforms while letting them moderate it.

“Section 230 is the most important law protecting internet speech and removing Section 230 will remove speech from the internet,” Dorsey told lawmakers, before laying out three recommendations to address concerns about big tech overreach in suppressing content.

“Requiring—one—moderation process and practices to be published. Two, a straightforward process to appeal decisions. And three, best efforts around algorithmic choice, are suggestions to address the concerns we all have going forward. And they’re all achievable in short order,” Dorsey said.

While publishers can be held liable for any content they post, social media platforms are protected by Section 230, which states that “no provider or user of an interactive computer service shall be treated as the publisher or speaker of any information provided by another information content provider.”

Sundar Pichai, CEO of Alphabet Inc., which owns Google and YouTube, argued that “the internet has been a powerful force for good” but that the kind of low barriers to entry that allow users to easily access the platforms and freely share information also carries the potential for abuse.

“The same low barriers to entry also make it possible for bad actors to cause harm,” Pichai said, adding that, “Google is deeply conscious of both the opportunities and risks the internet creates.”

He said Section 230 protections have been “foundational to the tech sector” as it “protects the freedom to create and share content while supporting content platforms and services of all sizes,” and urged caution around changes to the framework.

“I would urge the Committee to be very thoughtful about any changes to Section 230 and to be very aware of the consequences those changes might have on businesses and customers,” he said, adding that Google is supportive of legal frameworks that advance the goals of free exchange of information.

Facebook CEO Mark Zuckerberg said “setting the rules for online discourse is an important challenge for our society and there are principles at stake that go beyond any one platform. How do we balance free expression and safety? How do we define what is dangerous? Who should decide?”

“Some say that ending 230 would solve all problems. Others say it would end the internet as we know it,” he said, adding that without Section 230 protections, “platforms could essentially be held liable for everything that people say.”

Zuckerberg  said he does not believe private companies should make such decisions by themselves and called for Congress to be involved in putting in place a “more accountable process.”

“The internet has also evolved and I think that Congress should update the law to make sure that it is working as intended. One important place to start would be making content moderation systems more transparent,” he said. “Another would be to separate good actors from bad actors by making sure that companies can’t hide behind Section 230 to avoid responsibility for intentionally facilitating illegal activity on their platforms.” He added that Facebook is “open to working with Congress on these ideas and more.”

“This is a difficult period but I believe that America will emerge stronger than ever and we are focused on doing our part to help,” Zuckerberg added.

Section 230 currently allows companies to block or screen content “in good faith” if they consider it “obscene, lewd, lascivious, filthy, excessively violent, harassing, or otherwise objectionable.” But in recent years, the legal protections afforded have been used to shield online platforms that engage in “censoring” or “political conduct,” Attorney General William Barr wrote in a September letter to Vice President Mike Pence and House Speaker Nancy Pelosi (D-Calif.). Barr announced a legislative proposal “to modernize and clarify the immunity” that Section 230 affords to social media companies.

“They no longer function as simple forums for posting third-party content, but use sophisticated algorithms to suggest and promote content and connect users. Platforms can use this power for good to promote free speech and the exchange of ideas, or platforms can abuse this power by censoring lawful speech and promoting certain ideas over others,” Barr wrote.

Some of the proposals include replacing vague terms like “otherwise objectionable” with more specific language “promoting terrorism, promoting violent extremism, promoting self-harm, and unlawful” in order to prevent broad interpretations of the law. The legislative proposals also limit immunity to online platforms who do not abide by its own terms of service and public representations by failing to consistently apply their terms of service.

The tech industry has been resisting efforts to revamp or repeal Section 230, saying that the DOJ proposals could limit people’s ability to express themselves online.

Mimi Nguyen-Ly and Peter Svab contributed to this report.