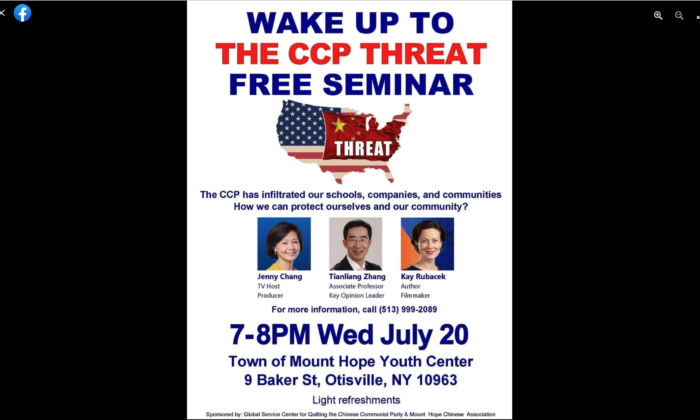 The flyer of a free seminar posted on Mount of Hope facebook on July 14, 2022. (Screenshot by The Epoch Times)
Infiltrating the West

The organizers of a free seminar in a small town in upstate New York have received a death threat phone call from someone who claims to be “a representative of the Chinese Communist Party.” The voicemail was found on the event hotline on July 18, two days prior to the seminar.

The seminar on how to protect local schools, companies, and communities from Chinese Communist Party (CCP) infiltration will be held at 7 p.m. on July 20 at the youth center in the Town of Mount Hope, a quiet mountain town in upstate New York with a population of 7,000.

The seminar is sponsored by the Mount Hope Chinese Association and the New York-based Global Service Center for Quitting the CCP. The panelists include a TV program producer, a filmmaker, and an associate professor.

One of the seminar organizers surnamed Cheng told The Epoch Times that the voicemail was very strange because not only does the caller ID (+44 7958264144) seem to be from the UK, but the voice also seems to have been manipulated to hide the identity of the caller.

‘Wake Up to the CCP Threat’

The seminar titled “Wake Up to the CCP Threat” will cover how the CCP has infiltrated U.S. schools, businesses, and communities.

Kay Rubacek, an author and filmmaker, is one of the three panelists at the seminar. She said on July 19 that “the CCP controls people through fear and bribery. This is its proven method of operation. The CCP wants us to be afraid but now is the time that we need to have moral courage to stand up for the truth and do what is right. We should not lower our standards or change our values for the CCP and we absolutely should not succumb to fear.”

Rubacek was previously a reporter with NTD, the sister media outlet of The Epoch Times.

Ms. Xu, an organizer of the seminar, told The Epoch Times on July 19 that they have reported the threat to the local police and the FBI field office. “The police told us that they’ve dialed the caller’s number multiple times and no one answered,” Xu said. “The local police is taking this threat seriously and will deploy personnel to the seminar to ensure the safety of the event.”

The seminar organizers have also notified the local elected officials, including the mayor and council members, about the voicemail.

“They were shocked,” Xu said. “The fact that the CCP’s tentacles have reached this quiet mountain town shows how prevalent its infiltration is inside the United States. It’s endangering our national security and trampling on the right to free speech of the U.S. citizens.”