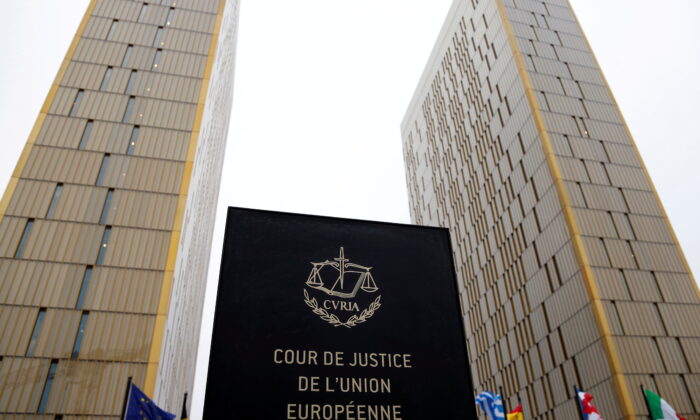 The towers of the European Court of Justice in Luxembourg, on Jan. 26, 2017. (Francois Lenoir/File Photo/Reuters)
Europe

The Polish government must pay a 1 million euro (about $1.2 million) penalty per day for maintaining a disciplinary chamber for judges, the European Union’s top court, citing the primacy of EU law over national law, ruled on Oct. 27.

“As it has not suspended the application of the provisions of national legislation relating, in particular, to the areas of jurisdiction of the Disciplinary Chamber of the Supreme Court, Poland is ordered to pay the European Commission a daily penalty payment in an amount of €1.000.000,” the Court of Justice of the European Union (CJEU) said in a statement.

The punitive measure comes after the Luxembourg court had asked Poland in July as an interim measure to immediately suspend all activities of the chamber, which led to a war of words in which Poland told the EU to stay out of its judicial affairs.

The fine is separate from another daily 500,000 euro ($580,000) penalty the CJEU ordered Poland last month to pay for having ignored its injunction to halt operations at the Turow brown coal mine on the Czech border, which the Czech government cited as damaging to its communities.

Poland has disregarded the judgment, and the mine is reportedly still operational. It’s possible for members of EU countries to refuse to pay penalties imposed by the European Commission (EC), although the EU can take the money from its funds to Poland, or any country in the 27-member bloc.

Polish Prime Minister Mateusz Morawiecki told the European Parliament last week that the country is working on abolishing the disciplinary chamber and replacing it with another system before the end of the year, but no detailed plans have been presented yet.

Sebastian Kaleta, Poland’s deputy justice minister, called the penalties imposed by the CJEU “usurpation and blackmail” as it “completely disregards and ignores the Polish constitution.”

The daily fine was “necessary in order to avoid serious and irreparable harm to the legal order of the European Union and to the values on which that Union is founded, in particular, that of the rule of law,” the CJEU said in its Oct. 27 statement.

In early October, the Polish Constitutional Tribunal ruled that some of the EU’s laws conflict with the country’s constitution and that national laws will have supremacy over those of the EU in areas where they clash, a move that was criticized by the EU, prompting a week-long war of words between Poland and the EU.

“The attempt by the European Court of Justice to involve itself with Polish legal mechanisms violates … the rules that give priority to the constitution and rules that respect sovereignty amid the process of European integration,” the tribunal ruled at the time.

Poland’s Law and Justice ruling party has been in conflict with Brussels since 2015 over a number of matters, including the judiciary, illegal immigration, and LGBT rights.