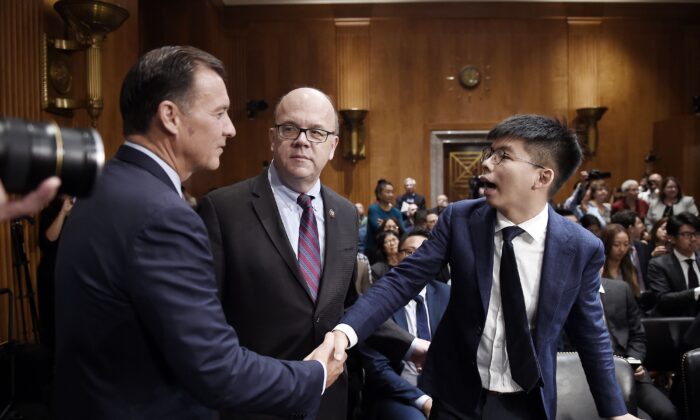 Activist Joshua Wong (R) meets with Rep. Tom Suozzi (D-N.Y.) and CECC Chairman Jim McGovern (D-Mass.) ahead of a hearing about the pro-democracy movement in Hong Kong, on Capitol Hill on Sept. 17, 2019. (Olivier Douliery/AFP via Getty Images)
By Mark Tapscott

Rep. Tom Suozzi (D-N.Y.) failed to disclose—as required by congressional rules—at least 31 stock transactions valued at more than $885,000, including several made more than four years ago, according to a nonprofit government watchdog.

In a complaint filed with the Office of Congressional Ethics (OCE) that cited multiple media reports, the Foundation for Accountability and Civic Trust (FACT) stated that the New York Democrat’s “transactions occurred between September 2017 and June 2021 and were ultimately disclosed on March 3, 2022. One of Suozzi’s transactions was the stock purchase of aluminum manufacturer Superior Industries International Inc. on September 5, 2017, which Suozzi disclosed over four years late.”

Suozzi’s “other trades involved companies that are either clearly regulated or affected by congressional action, such as Apple, Altria Group, Boeing, BlackRock, Caterpillar, Citigroup, Cisco Systems, General Electric, IBM, and Verizon Communications,” according to the Washington-based nonprofit.

Representatives are required to report any financial transaction valued at $1,000 or more within at least 30 days and not later than 45 days after its completion. Such transactions are also required to be included in annual reports by every member of the lower chamber of Congress.

A spokesman for Suozzi didn’t respond to The Epoch Times’ request for comment on the FACT complaint.

Congressional financial disclosure requirements resulted mainly from controversy sparked in 2012 by the publication of investigative reporter and activist Peter Schweizer’s best-selling book, “Throw Them All Out: How Politicians and Their Friends Get Rich Off Insider Stock Tips, Land Deals, and Cronyism That Would Send the Rest of Us to Prison.”

“There is simply no excuse for making disclosures months to years late, and Suozzi’s egregious delay makes the law ineffective. This is because the long delay makes it nearly impossible for the public to determine whether Suozzi used nonpublic information or had a conflict of interest at the time he traded the stocks,” FACT told OCE.

“Additionally, this is not the first time Suozzi appears to have violated disclosure requirements. He was the subject of a prior complaint filed with the OCE on September 22, 2021, alleging he failed to disclose approximately 300 stock trades. The length of the delay in this current instance, the volume of unreported financial transactions, and the repeated inability to comply with the rules clearly indicate an intentional disregard for the law, at a minimum.”

The 2021 controversy followed a complaint filed with OCE by the Campaign Legal Center (CLC), another nonprofit government ethics watchdog, that claimed the 300 transactions were valued “ranging from approximately $3.2 million to $11 million” and that Suozzi “did not file any Periodic Transaction Reports (PTRs), which are required for each transaction pursuant to the STOCK Act and House rules.”

Violation of the disclosure laws and regulations subjects violators to up to a year in prison and penalties in excess of $60,000, according to the CLC.

Suozzi is presently in a combative Democratic primary running against Gov. Kathy Hochul, who succeeded the disgraced Andrew Cuomo last year when he resigned in the face of multiple allegations of sexual misconduct involving members of his staff. Hochul is heavily favored to win the June 22 primary election.

Whoever wins the Democratic primary is likely to face Rep. Lee Zeldin (R-N.Y.), another Long Island officeholder who was first elected to the House in 2014.

Enforcement of the STOCK Act has been spotty, according to critics, and OCE almost never makes public the results of its work. The House Ethics Committee, which includes five Democrats and five Republicans, hasn’t issued a statement regarding the OCE complaints filed against Suozzi.

Suozzi represents a Long Island, New York, district and is a member of the House Ways and Means Committee, which has oversight jurisdiction on tax issues, including the tax treatment of stock market investments. He’s also a member of the Congressional-Executive Commission on China.