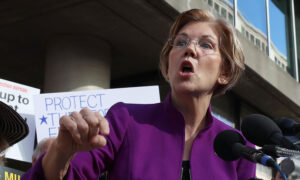 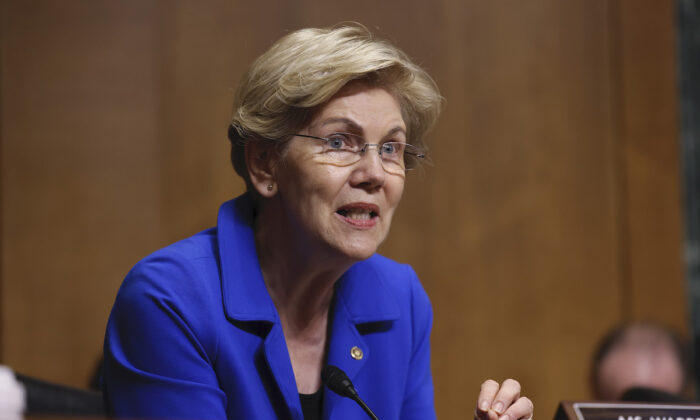 Sen. Elizabeth Warren (D-Mass.) during a Senate hearing on Tuesday told Federal Reserve Chairman Jerome Powell that she will oppose his renomination, citing his many decisions that she claims have weakened the Federal Reserve’s regulatory oversight of large banks.

“I came to Washington after the 2008 crash to make sure that nothing like that would ever happen again. Your record gives me grave concern. Over and over, you have acted to make our banking system less safe, and that makes you a dangerous man to head up the Fed, and it’s why I will oppose your renomination,” said Warren during the Senate Banking Committee hearing.

Warren suggested that Powell’s decision to change the stress test, designed to tell whether or not big banks can survive without a taxpayer bailout, weakened the banking system.

Warren said that this became evident during the recent pandemic. “Those banks needed stimulus from the taxpayers, and without this taxpayer help, they would have faced up to $300 billion in losses, meaning that they were in a sharply weakened position to withstand stress,” Warren said.

She asked Powell if he regretted his decision to change the stress test.

“When banks fail the stress test, their distributions are limited,” Powell responded, adding that he does not think the changes on the stress test for banks had a negative impact, but “I’m prepared to look at anything we did, is fair game to look at again.”

Warren said the question of whether to renominate Powell was like an “elephant in the room.” It would be a gamble because it is not assured that with “a Republican majority of the Federal Reserve with a Republican chair, who has regularly voted to deregulate Wall Street, won’t drive this economy over a financial cliff again,” she said. “And with so many qualified candidates for this job, I just don’t think that’s a risk worth taking. I know that some argue that your deregulatory actions are mostly harmless. I disagree. I think they’ve put taxpayers at risk for hundreds of billions of dollars.”

Warren said she believes Powell’s decisions will eventually lead to a financial crisis like the one in 2008.

“So far you’ve been lucky. But the 2008 crash shows what happens when the luck runs out,” she said. “The seeds of the 2008 crash were planted years in advance by major regulators like the Federal Reserve that refused to rein in big banks.”

Sen. Mike Rounds (R-S.D.), who questioned Powell immediately after Warren, said he disagrees with the progressive senator and would vote to renominate the chair.

“Well, needless to say, Chairman Powell, I would probably disagree with my colleague and I commend you for the hard work that you have done. And I most certainly think that you do deserve to be renominated to the position that you have right now and I look forward to working with you for the next several years,” said Rounds.

In August, a group of progressives in the House urged President Joe Biden to replace Powell with someone who will make decisions that further their climate change agenda.

“At a time when the Intergovernmental Panel on Climate Change is warning of the potentially catastrophic and irreversible damage inflicted by a changing climate, we need a leader at the helm that will take bold and decisive action to eliminate climate risk,” wrote the group of progressive House lawmakers, which included Reps. Alexandria Ocasio-Cortez (D-N.Y.), Ayanna Pressley (D-Mass.), Rashida Tlaib (D-Mich.), Jesus Garcia (D-Ill.), and Mondaire Jones (D-N.Y.).