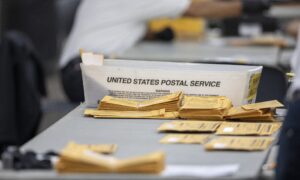 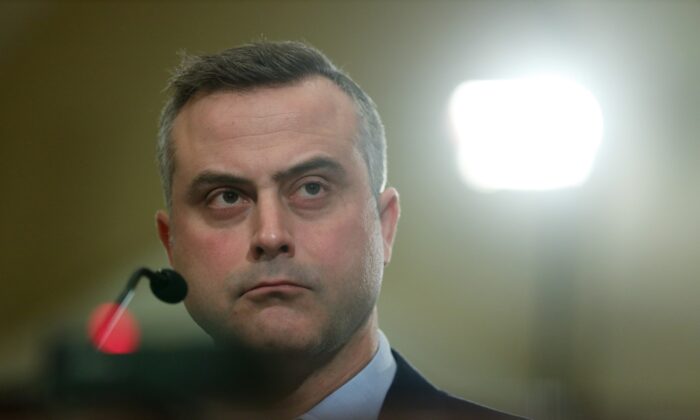 President and CEO of Dominion Voting Systems John Poulos testifies during a hearing before Congress in Washington on Jan. 9, 2020. (Alex Wong/Getty Images)
Pennsylvania

Dominion Voting Systems committed to attending an oversight hearing in Pennsylvania but backed out at the last moment, lawmakers in the Keystone State said Friday.

“The members of the state government committee were looking forward to publicly addressing the plethora of accusations of Dominion Voting Systems in a format which would have allowed open and honest dialogue. I was impressed at what appeared to be the willingness of Dominion Voting Systems to address accusations, and it would have put the 1.3 million Pennsylvanians who used their machines at ease, including myself,” state Rep. Seth Grove, a Republican who chairs the Government Oversight Committee, said during a press conference.

“Unfortunately, last evening, Dominion Voting Systems lawyered up and backed out of their commitment.”

Fourteen counties in Pennsylvania use Dominion’s voting systems. Approximately 1.3 million people, or 19 percent of voters, voted in those counties.

“Instead of running towards the light of honesty and integrity, Dominion Voting Systems retreated to the darkness. Why? Why would a vendor of public goods fear discussing their products sold to the public for the public good?” Grove said.

“If Dominion’s products were successful and operated as they were supposed to, why wouldn’t Dominion take the opportunity to publicly review its success? How hard is it to say, ‘our ballot machines worked exactly as promised, and they are 100 percent accurate?'”

In an emailed statement to The Epoch Times, Kay Stimson, Dominion’s vice president of government affairs, confirmed the company had agreed to the hearing.

“However, that conversation was overshadowed yesterday by threats of litigation coming towards our company during a national press conference,” she said. “As we await the opportunity to debunk the baseless conspiracy theories being offered about Dominion and its voting systems in a court of law, we had to ask for a postponement of the discussion. Notably, our company doesn’t even support Philadelphia, or some of the other jurisdictions being targeted by attorneys in their remarks.”

The cancellation adds credibility to accusations against Dominion, state lawmakers said. They said Dominion has to earn the trust of Pennsylvanians.

Dominion was given the chance “to demonstrate who they were, the services they were providing, the products that they were selling us and how they were being utilized, and give the voters the confidence that they’re looking for,” she added.

Dominion has a lengthy statement on its website that it last updated on Nov. 17. The company challenged some of the claims made about Dominion machines, including allegations that the company deleted millions of votes for President Donald Trump.

Dominion says it is a nonpartisan company, although it has acknowledged connections with the Clinton Global Initiative and a former staffer to House Speaker Nancy Pelosi (D-Calif.).

Trump and his campaign have said Dominion systems are not secure and they have filed lawsuits in Pennsylvania contesting the unofficial election results.

Counties in Pennsylvania face a Nov. 23 deadline to certify the results.

According to the Pennsylvania Department of State’s count, Democratic presidential nominee Joe Biden received over 81,000 more votes than Trump.