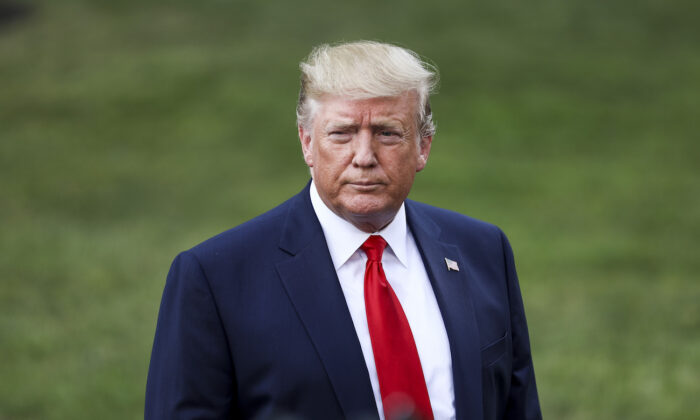 Then-President Donald Trump speaks to the media before boarding Marine One en route to Ohio on the White House South Lawn in Washington on Aug. 1, 2019. (Charlotte Cuthbertson/The Epoch Times)
By Mimi Nguyen Ly

The Department of Justice (DOJ) on Friday filed a motion requesting a federal appeals court to fast-track its appeal of the appointment of a special master to review documents the FBI seized at former President Donald Trump’s Mar-a-Lago estate in Palm Beach.

The DOJ on Friday proposed that the Atlanta-based 11th Circuit Court of Appeals orders all written briefs be filed in the case by Nov. 11, and hold any necessary hearing in the case as soon as that briefing is completed. Currently, the deadline for the briefs is scheduled for about a month later—Dec. 9—and oral arguments have not been scheduled.

If the court doesn’t expedite the DOJ’s appeal and resolve the case, the special master review “could result in prolonged litigation,” the department argued in the filing.

In the filing, the DOJ complained about how, due to court orders related to the special master review, it is currently barred from accessing over 11,000 materials that were not marked classified the FBI seized, which means it “cannot examine records that were comingled with materials bearing classification markings.”

But those non-classified records “may shed light on, for example, how the materials bearing classification markings were transferred to [Trump’s] residence, how they were stored, and who may have accessed them,” the DOJ said. The non-classified records may also constitute evidence of potential violations of federal statutes on obstruction and concealment or removal of government records, it added.

The DOJ argued that an expedited schedule for briefing and argument would, if its appeal is successful in halting the special master review, allow it “to more quickly resume its investigation without restraints on its review and use of evidence seized pursuant to a lawful search warrant.”

The FBI on Aug. 8 seized thousands of documents without warning from Mar-a-Lago as part of a DOJ investigation into whether Trump mishandled government records, and whether he tried to obstruct the DOJ investigation. Christina Bobb, a Trump lawyer, previously told The Epoch Times that the FBI agents were “looking for presidential records, what they deemed to be presidential records and anything that could potentially be classified.”

Senior U.S. District Judge Raymond Dearie was appointed on Sept. 15 as special master after Trump requested for an independent arbiter to review the seized documents. Dearie is now tasked with reviewing all of the materials the FBI seized in its August raid, as well as determining whether any materials should not be reviewed by the DOJ because they are potentially covered by claims of attorney-client or executive privilege. The review is currently set to end by Dec. 16.

In naming Dearie as special master, U.S. District Judge Aileen Cannon had also temporarily blocked the DOJ from continuing its review of the seized materials and using the materials for investigative purposes, “pending completion of the special master’s review or further Court order.”

But a panel of three judges on the 11th Circuit Court of Appeals on Sept. 21 unanimously overturned parts of Cannon’s ruling to allow the DOJ to regain access to documents that bore classified markings seized in the FBI Mar-a-Lago raid, of which there were around 100.

The panel’s ruling was in response to a motion for a partial stay from the government. The panel determined that Cannon “likely erred” in her order to temporarily block the DOJ from using classified records in its criminal investigation and to require it to submit the documents marked classified to a special master for review. Its ruling meant that the DOJ can now rely on the materials marked classified taken in the FBI raid as part of its investigation; including in referring to the materials for witness interviews, or in presenting charges to a grand jury.

On Sept. 22, Cannon blocked the special master from viewing the documents taken from Mar-a-Lago that were marked classified.