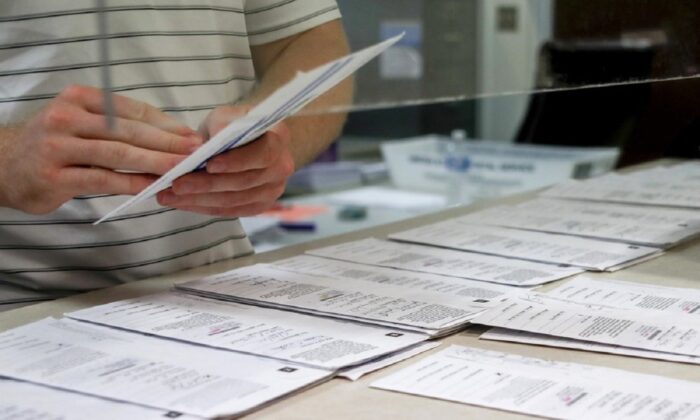 Processing work on mail in ballots for the Pennsylvania Primary election is being done at the Butler County Bureau of Elections, in Butler, Pa., on May 28, 2020. (Keith Srakocic/AP Photo)
Election Integrity

The Department of Justice directed the Pennsylvania county where discarded ballots were found to change its practices before the upcoming election.

U.S. Attorney David Freed said in a letter to Shelby Watchilla, director of elections for Luzerne County, that the nine discarded ballots all originated with members of the military.

Two of the ballots had been recovered by elections staff, reinserted into what appeared to be their appropriate envelopes, and resealed. One was linked to an envelope that was recovered, potentially tying it to a specific voter. The six others were simply removed and discarded, and can’t be attributed to a specific voter.

The majority of the discarded ballots and envelopes were found in a dumpster.

“The preliminary findings of this inquiry are troubling and the Luzerne County Bureau of Elections must comply with all applicable state and federal election laws and guidance to ensure that all votes—regardless of party—are counted to ensure an accurate election count,” Freed wrote.

“Even though your staff has made some attempts to reconstitute certain of the improperly opened ballots, there is no guarantee that any of these votes will be counted in the general election. In addition, our investigation has revealed that all or nearly all envelopes received in the elections office were opened as a matter of course. It was explained to investigators the envelopes used for official overseas, military, absentee and mail-in ballot requests are so similar, that the staff believed that adhering to the protocol of preserving envelopes unopened would cause them to miss such ballot requests.

“Our interviews further revealed that this issue was a problem in the primary election—therefore a known issue—and that the problem has not been corrected.”

In the meantime, Freed urged the county election official to correct the issues. Both he and Luzerne County District Attorney Stefanie Salavantis, a Republican, are available to meet with Watchilla, he told her.

“Please be assured that the investigators will carefully preserve all documents collected in connection with this investigation. Our goal, that I am sure you share, is to ensure that every properly cast ballot is counted,” Freed said.

County administrators alerted the district attorney’s office last week about issues with a small number of mail-in ballots, Salavantis said in a statement. Based on the information, her office launched a probe and consulted with the U.S. Attorney’s Office.

At the request of the district attorney, federal officials took over the case on Monday.

“The investigation is in its early stages and we are confident that it will be successfully resolved so it will not have an impact on the integrity of the election process,” Salavantis said.

At the time the investigation started, county officials had not started sending out regular mail-in ballots. But military members and overseas citizens are able to request and receive special write-in absentee ballots before printed ballots are ready, according to the state of Pennsylvania.

Seven of the nine discarded ballots were cast for Trump, officials said.

FBI agents, working together with the Pennsylvania State Police, have conducted “numerous interviews” and recovered and reviewed physical evidence, the Department of Justice said in a statement. Election officials in the county have been cooperating with the probe.

In an updated statement on Thursday that was sent to The Epoch Times, Chief County Solicitor Romilda Crocamo thanked the district attorney’s office, state police, and federal officials for quickly accepting the request for a probe and for their professional work on the investigation.

“The County will continue to work in cooperation with the authorities throughout their review,” he said. “Due to the fact that this is an ongoing investigation, it is not appropriate for the County to provide further comment at this time.”