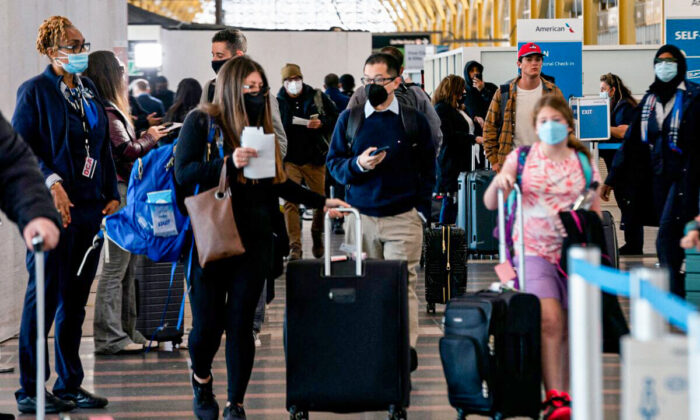 The U.S. Department of Justice (DOJ) on May 31 asked a federal appeals court to overturn a prior ruling by a U.S. District Court judge that found mask mandates for planes and other public transports unlawful.

The Centers for Disease Control and Prevention’s (CDC) mask mandate “s easily within the CDC’s statutory authority,” DOJ lawyers said in the filing, to the U.S. Court of Appeals for the 11th Circuit.

The appeal came after U.S. District Judge Kathryn Kimball Mizelle struck down the CDC mandate, ruling that the mandate exceeded the agency’s statutory authority and its implementation violated administrative law.

The CDC set the mask rule on public transportation and airplanes in early 2021. It included children aged 2.

Mizelle argued, in a 59-page summary judgment, that the CDC violated the Administrative Procedure Act by not allowing a period for public comment before enacting the mandate in February 2021.

On April 21, Dr. Anthony Fauci criticized the ruling, telling CBS that the CDC “has the capability, through a large number of trained epidemiologists, scientists, to be able to make projections and make recommendations … far more than a judge with no experience in public health.”

He also said the ruling sets a “dangerous precedent,” although he did not address the substance of the judge’s arguments in her order.

After Fauci’s criticism, a White House spokesperson defended the ruling while Republicans suggested Fauci has a poor understanding of federal law.

White House COVID-19 response coordinator Ashish Jha said at the time “the judiciary has an important role to play” but that the DOJ was “appealing this decision.”

“Paging Dr. Fauci—That’s not how America operates. The Constitution applies to you too, Doc!” Hice wrote on April 21.

Following the judge’s order, most major U.S. transport companies, including airlines, trains, and rideshares, announced they would remove their mask rules. The Transportation Security Administration, which enforced the rule, said it would stop enforcing the order.