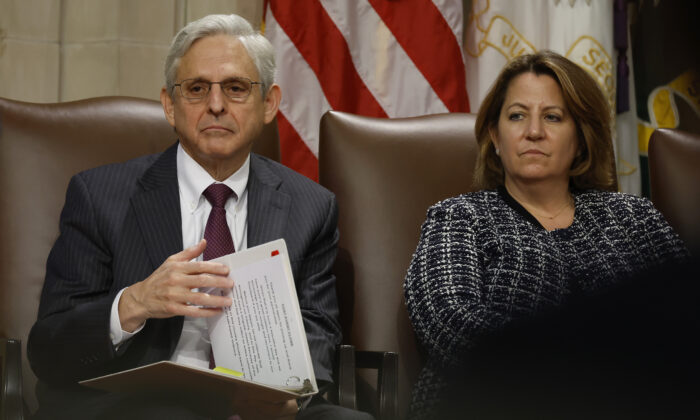 The U.S. Department of Justice (DOJ) on May 20 announced new initiatives worth $10 million to curb hate crimes and other “bias-related incidents.”

As part of the DOJ’s efforts, it released “new guidance” with the Department of Health and Human Services (HHS) to raise awareness of hate crimes during the COVID-19 pandemic.

There is also $5 million for grant opportunities to set up state-run “hate crime reporting hotlines” and support “community-based approaches to prevent and address hate crimes.” The DOJ will also hire its first “language access coordinator.”

“Throughout our history, and to this day, hate crimes have a singular impact because of the terror and fear they inflict on entire communities,” Attorney General Merrick Garland said in a release.

“No one in this country should have to fear the threat of hate fueled violence. The Justice Department will continue to use every resource at its disposal to confront unlawful acts of hate, and to hold accountable those who perpetrate them.”

Establishment media reports of violence against Asian Americans spiked since the beginning of the coronavirus pandemic.

In 2021, one Kentucky State University professor scoured publicly available information on around 100 attacks on Asians reported by the police between 2020 and 2021 and determined that in over 60 percent of the cases the suspect was identified as black.

The DOJ’s announcement comes on the one-year anniversary of the enactment of the COVID-19 Hate Crimes and Khalid Jabara-Heather Heyer NO HATE Acts. Since January 2021, the DOJ has said it has secured more than 35 convictions of defendants charged with “bias-motivated crimes.”

The DOJ defined a hate crime as a crime that is “motivated by bias against race, color, religion, national origin, sexual orientation, gender, gender identity, or disability.” The most common form, nearly 30 percent, is vandalism or property damage.

However, there are now more crimes considered bias-related or hate crimes.

There has also been a national campaign of billboards, outdoor ads, radio streaming, and social media ads, along with conferences, resources, and training to help the community and law enforcement identify them.

The DOJ said it has gone “above and beyond” its remit under the COVID-19 Hate Crimes Act and expedited “the review of certain hate crimes by including additional types of hate crimes.” It included a full list of its actions to combat hate crimes in a release.

HHS Services Secretary Xavier Becerra said that amid a “spike in hate crimes against many communities” during the pandemic some people were still afraid to leave their homes “out of fear for their physical safety.”

Becerra, who also co-chairs the White House Initiative and President’s Advisory Commission on Asian Americans, Native Hawaiians, and Pacific Islanders, said the Biden administration was committed to “combatting hate crimes against all Americans.”