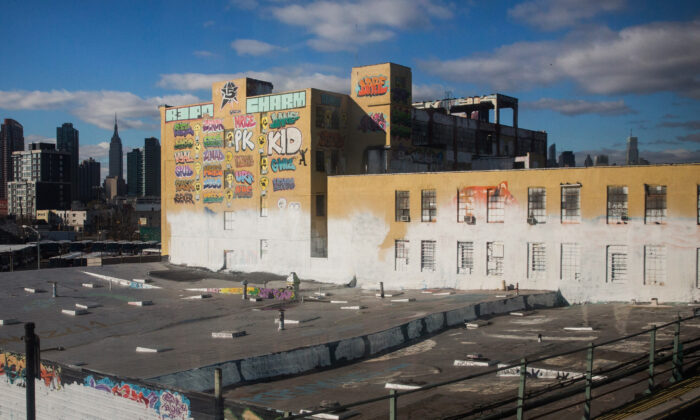 The graffiti mecca 5 Pointz is seen after being painted over by developers in the dead of night in the Long Island City neighborhood of the Queens borough of New York City on Nov. 19, 2013. (Andrew Burton/Getty Images)
Judiciary

A property owner in New York City petitioned the U.S. Supreme Court last week to overturn a $6.75 million damages award granted to graffiti artists after the owner whitewashed street-art paintings at an experimental site where works were routinely painted over to clear the way for new art.

The legal battle concerns the Visual Artists Rights Act of 1990 (VARA), which authorizes courts to impose damages of up to $150,000 against the owner of a work of visual art of “recognized stature” if the owner destroys it. VARA pits these statutory rights against the building owner’s rights, as well as the Fifth Amendment’s Due Process Clause, which states in part, “No person shall … be deprived of life, liberty, or property, without due process of law.”

The graffiti deemed art was spray-painted on dilapidated warehouses known collectively as 5Pointz in Long Island City, New York. 5Pointz was also known as “The Institute of Higher Burnin” and as “5Pointz Aerosol Art Center,” and became well-known as a showplace that attracted graffiti aficionados.

“Numerous artists painted the buildings’ exterior and interior walls … and the site became a popular tourist attraction with New York City locals calling it ‘The Mecca of Graffiti,’” The Art Newspaper reports.

On Feb. 20, the U.S. Court of Appeals for the 2nd Circuit affirmed the decision of the U.S. District Court for the Eastern District of New York, ruling against the company.

The case, known as G&M Realty L.P. v. Castillo, was docketed by the high court July 24, well after the usual deadline for filing an appeal. In response to the “public health concerns relating to COVID-19,” on March 19, Chief Justice John Roberts extended the time to file a petition to 150 days from the date of the lower court judgment. The other side’s response to the property owner’s petition seeking review is due Aug. 24.

“We are hopeful the Court will agree to review [the] case, which concerns important (and interesting) issues,” the company’s counsel of record, Scott E. Gant of Boies Schiller Flexner LLP, told The Epoch Times in an emailed statement.

The graffiti artists couldn’t immediately be reached by The Epoch Times for comment.

The case goes back to 2013 when G&M Realty, a real estate development company headed by Jerry Wolkoff, decided to tear down its buildings and replace them with luxury residential housing. (Wolkoff died at age 83 earlier this month.) A group of artists tried to save the structures through legal action but failed.

In November 2013, the artists claimed the walls of 5Pointz had been covered over with white paint without notice, making it impossible to preserve the graffiti. Outraged, the artists sued, claiming that they hadn’t been given proper legal notice of the painting-over.

U.S. District Judge Frederic Block, who was appointed by then-President Bill Clinton, gave the artists a $6.75 million damages award and rebuked Wolkoff for his supposed “insolence” in covering over the graffiti that was never intended to be on permanent display.

“If not for Wolkoff’s insolence, these damages would not have been assessed,” wrote Block, reportedly a 5Pointz graffiti fan, in a 2018 decision.

“If he did not destroy 5Pointz until he received his permits and demolished it 10 months later, the Court would not have found that he had acted willfully.”

In his petition to the Supreme Court, Gant argues that VARA was inspired by foreign law.

“VARA marked the first and only time that Congress has conferred artists with ‘moral rights’—a concept borrowed from the laws of European countries,” he writes.

“The ‘recognized stature’ provision concerns itself with an artist’s ‘moral right’ to ‘integrity’—broadly speaking, the right to ensure that the work is not altered without the artist’s consent.”

But this provision “raises a host of constitutional red flags—including questions about Congress’s authority to enact it, and First Amendment objections,” as well as “due process requirements because Congress neglected to define this novel phrase [“recognized stature”], which fails to provide a person of ordinary intelligence fair notice of what is prohibited.”