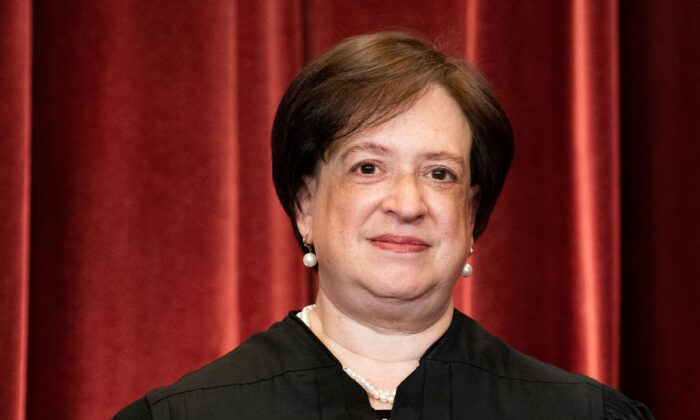 Supreme Court Justice Elena Kagan stands during a group photograph of the Justices at the Supreme Court in Washington on April 23, 2021. (Erin Schaff/Pool/AFP via Getty Images)
Judiciary

The comments by justices in recent weeks on the Supreme Court’s legitimacy are hurting the nation’s top court, according to Alan Dershowitz, a professor of law emeritus at the Harvard Law School.

“Judges create legitimacy problems for themselves … when they instead stray into places where it looks like they’re an extension of the political process or when they’re imposing their own personal preferences,” she said during one public appearance, at the Temple Emanu-El Streicker Center in New York on Sept. 12. She added that “changes in personnel don’t send the entire legal system up for grabs.”

“The real question is whether this debate should be held in public or whether through a decision for the Supreme Court. My view is it’s much better for it to be done through decisions of the Supreme Court when each side can answer the other,” Dershowitz added.

“Principle is out the window. Principles have become subordinate to partisanship. And that’s why I wrote my book The Price of Principle—to try to restore us to a time when neutral principles operated and when it didn’t matter whose ox is gored at the time.”

“If new members of a court come in and all of a sudden everything is up for grabs, all of a sudden very fundamental principles of law are being overthrown or are being replaced, then people have a right to say, ‘What’s going on there? That doesn’t seem very law-like,’” she said at the Northwestern Pritzker School of Law.

That appeared to be a reference to the three justices appointed by Trump: Justices Neil Gorsuch, Brett Kavanaugh, and Amy Coney Barrett.

During an appearance at Salve Regina University, she said that “the very worst moments have been times when judges have even essentially reflected one party’s or one ideology’s set of views in their legal decisions.”

“I mean that just can’t and shouldn’t happen. There has to be a strong distinction between the two and the judges have to know their own role,” she added. “A court does not have any warrant, any rightful authority to do anything else but act like a court. When the Court becomes an extension of the political process, that’s when there’s a problem. And that’s when there ought to be a problem.”

The court’s legitimacy is drawn from “acting like a court” and “doing something that’s recognizably law-like,” according to Kagan. “And that’s when a court will build up some reservoir of public confidence and goodwill.”

Kagan’s comments appear designed to influence her colleagues, according to Edward Whelan, distinguished senior fellow and Antonin Scalia chair in constitutional studies at the Ethics and Public Policy Center.

“Justice Kagan is a very savvy political operator, and it sure seems as though she is trying to generate political pressure on her colleagues,” Whelan told The Epoch Times.

“It goes without saying that everyone is free to express disagreement with our decisions and to criticize our reasoning as they see fit,” Alito said. “But saying or implying that the court is becoming an illegitimate institution or questioning our integrity crosses an important line.”

Roberts, a George W. Bush appointee, did not vote with the other conservative justices in the 5–4 ruling overturning Roe v. Wade and Planned Parenthood v. Casey. But he joined the 6–3 ruling to uphold a Mississippi abortion law in the case, Dobbs v. Jackson Women’s Health Organization.

The chief justice also recently weighed in on the debate, saying “Simply because people disagree with an opinion is not a basis for questioning the legitimacy of the court.”

The public view of the court has fallen in recent years and dropped more over the past year.

According to a Gallup poll conducted in September, 47 percent of adults say they have a great deal or a fair amount of trust in the judicial branch of the federal government, which is headed by the Supreme Court. That is a seven-point drop since 2021.

In July, Gallup’s poll showed a minority of respondents, 43 percent, approved of the court ruling striking down Roe v. Wade which made abortion laws determined by the states.

The public information officer for the Supreme Court did not respond to a request for comment on the justices’ remarks.

The new court session begins Oct. 3. The court will keep live audio of proceedings, a policy started during the COVID-19 pandemic, enabling the public to know if the liberal minority will be able to work respectfully with the conservative majority after the month of criticism.