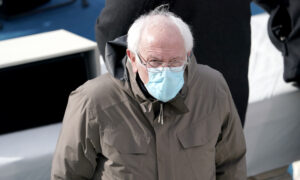 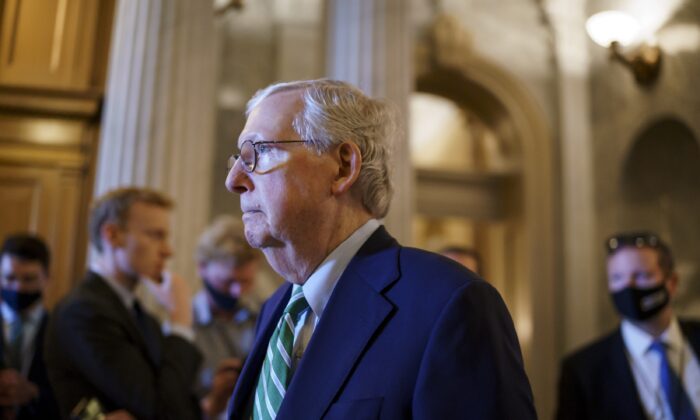 Senate Minority Leader Mitch McConnell (R-Ky.) walks past the chamber as the Senate advances to formally begin debate on a roughly $1 trillion infrastructure plan, at the Capitol in Washington, on July 30, 2021. (J. Scott Applewhite/AP Photo)
Politics

Democrats Want to Transform US Into a Socialist Country: Senate GOP Leader

Senate Minority Leader Mitch McConnell (R-Ky.) said Democrats are trying to use the pandemic to enact a legislative agenda that would transform America into a socialist country with policies, such as having the federal government fund healthcare and childcare, and ending America’s energy independence.

“The reckless taxing and spending spree the Democrats are writing behind closed doors is designed to leave Americans with a socialist country they never voted for. A country that working families in many ways would barely recognize,” said McConnell from the floor of the Senate on Monday..

“Senate Democrats will continue our work to pass historic legislation to strengthen our economy and renew America’s middle class for the 21st century,” said Schumer.

McConnell said Senate parliamentarian Elizabeth MacDonough saw through Democrats’ radical agenda and made the right decision on Sunday, where she ruled that Democrats cannot include a provision aimed to give millions of illegal immigrants a pathway to citizenship in their $3.5 trillion budget reconciliation.

“Last night one of those many efforts hit a stumbling block. Senate Democrats were reminded that the rules of this institution will not permit them to shove a massive amnesty for illegal immigrants into a reckless taxing and spending spree that they want to ram through on a party-line basis,” said McConnell.

MacDonough in her guidance said that the Democrats’ provision is “by any standard a broad, new immigration policy,” and that it does not meet the stringent requirements of what can be included in the budget reconciliation.

“The policy changes of this proposal far outweigh the budgetary impact scored to it and it is not appropriate for inclusion in reconciliation,” she wrote, referring to a parliamentary procedure that allows certain budget bills to pass the Senate with a simple majority instead of the 60-vote margin for most other legislation.

The Senate parliamentarian is an unelected, nonpartisan expert of chamber rules, sometimes referred to as the Senate referee. MacDonough also made the decision to take out the $15-an-hour federal minimum wage provision in President Biden’s $1.9 trillion coronavirus relief package, the American Rescue Plan.

With the Senate divided 50-50, the Democrats could potentially pass the budget reconciliation with zero GOP votes, as long as all the Democrat Senators voted in favor of the package, and have Vice President Kamala Harris be the tiebreaker.

McConnell said he was glad MacDonough could see the radical nature of the Democrats’ immigration reform portion of the legislation and quoted Senator Bernie Sanders (I-Vt.).

“Our Democratic colleagues cannot pretend that massive transformational policy changes are mere budgetary tweaks. As no less an authority than our colleague now Chairman Bernie Sanders said just a few years ago, quote, ‘the function of reconciliation is to adjust federal spending and revenue, not to enact major changes in social policy’ end quote. That’s Chairman Sanders a few years ago,” added McConnell.

However, Schumer said that the parliamentarian’s ruling will not deter their plan to implement their immigration reforms and provide citizenship to millions of illegal immigrants.

“The fight continues. Senate Democrats have prepared alternative proposals, and we’ll be holding additional meetings with the Senate parliamentarian in the coming days. I’ve been working closely with my colleagues in the Senate, including Judiciary Chairman Durbin, Senators Padilla, Menendez, Lujan, Cortez Masto, and we will continue our fight to find the best option available to provide immigrants with the chance at one day obtaining lawful residence here in America,” Schumer said.