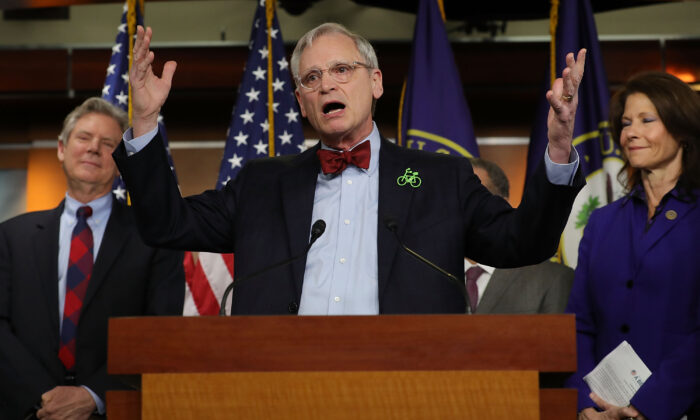 Rep. Earl Blumenauer (D-Ore.) has warned President Joe Biden against ordering a gas tax holiday, as other Democrats rally behind the plan as a way to bolster their image as gas prices continue to rise.

According to the most recent Consumer Price Index from the U.S. Department of Labor, the price of gasoline has increased by 48 percent on average over the past 12 months.

Many Democrats, worried about how these price increases will affect their chances in November, have begun to rally behind cries for Biden to order a gas tax holiday to provide temporary relief to American consumers.

However, Blumenauer warned in a letter to Biden that a federal gas holiday would not achieve this goal, and would instead cause various other unforeseen consequences.

Blumenauer, a left-wing progressive, cited a study from the Transportation Investment Advocacy Center which showed that over the past decade, gas tax cuts at a state level have done more to line the pockets of oil companies than to save costs for consumers. According to the study, only 18 percent of these tax cuts have been returned to the consumer in reduced prices while the rest have gone to increase profits for oil companies.

This, Blumenauer suggested, would remain a problem if Biden attempted the same thing at a federal level, increasing oil profits but failing to slow the rise in prices.

“While there is undoubtedly a need to provide American consumers relief from spiking costs, there is no guarantee a gas tax suspension would reduce prices at the pump or stem the broader inflation affecting the global economy, and it may only increase oil companies’ bottom lines,” Blumenauer wrote.

In addition, he said, “At only 18.4 cents per gallon, the federal gas tax represents a negligible and shrinking portion of the cost of gas at the pump.”

Not only would it fail to achieve its stated goal, Blumenauer said, it would also create a “massive hole” in revenue for infrastructure and transportation expenditures.

Blumenauer pointed particularly to the Highway Trust Fund, already operating under a deficit.

If Biden were to suspend the gas tax through the rest of 2022, Blumenauer said pointing to a University of Pennsylvania model, this deficit would increase by another $20 billion.

Blumenauer also argued that the proposal could have damaging effects for projects funded by the $1.2 trillion Infrastructure Investment and Jobs Act, a landmark infrastructure bill that has been touted by Biden as one of his administration’s biggest legislative accomplishments.

Under the infrastructure bill, he noted, appropriations are laid out on the assumption that gas tax revenues will remain constant. If the gas tax were to be suspended, he suggested, several of the bill’s programs could be at risk of underfunding.

“Delaying, or canceling outright, the projects this legislation makes possible will waste a once-in-a-lifetime opportunity to rebuild and renew America, and leave future generations holding the bag for long overdue repairs and improvements,” Blumenauer wrote.

Though it remains unclear if Biden will follow through with his party’s calls to cancel the gas tax, Blumenauer’s position has in the past been shared by Speaker of the House Nancy Pelosi (D-Calif.).

Like Blumenauer, Pelosi has argued that, despite her party’s calls for a gas tax holiday, there is “no guarantee that those savings will be passed on to the consumer.”

On the other hand, the White House announced on June 14 that it was at least taking the calls seriously, and meetings have been held to discuss the possibility of implementing a gas tax holiday.

Republicans, by contrast, have for months repeated demands that the White House to reverse its “anti-American energy policies.”

They have called for a return to the oil and natural gas policies of President Donald Trump, whose first term in office saw the U.S. achieve energy independence for the first time in decades.

Specifically, Republicans have demanded that Biden reverse a moratorium on leasing federal lands to oil and natural gas companies put into place not long after he took office.

They have also requested that the president renew construction on the Keystone XL pipeline, opposition to which has been a rallying standard for climate change activists since President Barack Obama occupied the Oval Office.