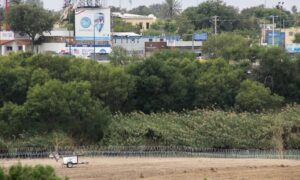 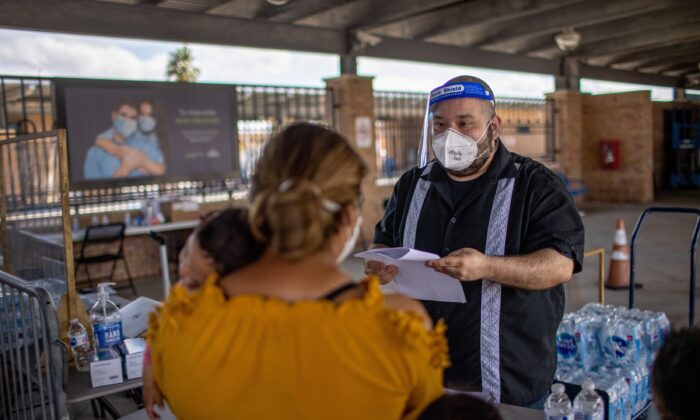 Asylum-seekers register for rapid COVID-19 tests in an isolation area at a bus station in Brownsville, Texas, on Feb. 26, 2021. (John Moore/Getty Images)
Democrats

A Democratic lawmaker has joined the chorus of Republicans upset with President Joe Biden’s immigration policies, saying his Texas district would be severely affected.

“We’re in the middle of a pandemic, but for thousands of people to be reaching our border in the middle of a pandemic in a disorderly fashion would be catastrophic to my district,” Rep. Vicente Gonzalez (D-Texas) said on March 1 during an appearance on CNN, as border arrivals have spiked after dropping precipitously during the Trump administration.

“I have lost over 3,000 citizens to COVID in my southern border district. I still have over 1,000 Border Patrol officers, 500 Customs agents, and a lot of front-line workers who still haven’t been vaccinated who are dealing with this population when they’re coming. We need to have a humane, compassionate way for people to ask for asylum in their home countries or their neighboring countries.

“And if they get the document, they can get on a plane for $400 and fly in. I think this policy forces them to make a 2,000-mile walk that is very dangerous, and they’re getting raped and pillaged along the way.”

Gonzalez was responding to a question about the Biden administration choosing not to expel unaccompanied minors that reach the border, in contrast to the Trump administration’s stance. He said he hopes there will be a policy in place to properly address asylum-seekers, who were made to wait in Mexico as their claims were processed during the Trump era, but are now being allowed to wait in the United States for their claims to be adjudicated.

Gonzalez has been advocating for a policy that would enable asylum-seekers to file claims at embassies or consulates in their home county.

“We need to have a policy in place to prevent children and adults from making this 2,000-mile walk to our border. And when we send the wrong message to Central America, that if you make it to our southern border, you’re going to be processed and released, you’re going to—you could pretty much assure that you’re going to have tens of thousands of people coming up to make this very dangerous trek. We need to find a safer solution to deal with asylum seekers,” he added.

“I can assure you it won’t be long before we have tens of thousands of people showing up to our border, and it will be catastrophic for our party, for our country, for my region, for my district.”

The criticism occurred before Biden’s Homeland Security secretary told reporters during a briefing that the administration was rebuilding the immigration system “virtually from scratch,” and might fly parents of unaccompanied minors that reach the border to the United States for reunification purposes.

“We have though, already begun, and to design and in fact, have begun to implement a new innovative way to address the needs of the population that was forced to remain in Mexico during the prior administration,” Alejandro Mayorkas said. “For example, we’ve also begun to rebuild a process for young people to be able to access avenues of protection without having to take the perilous journey.”