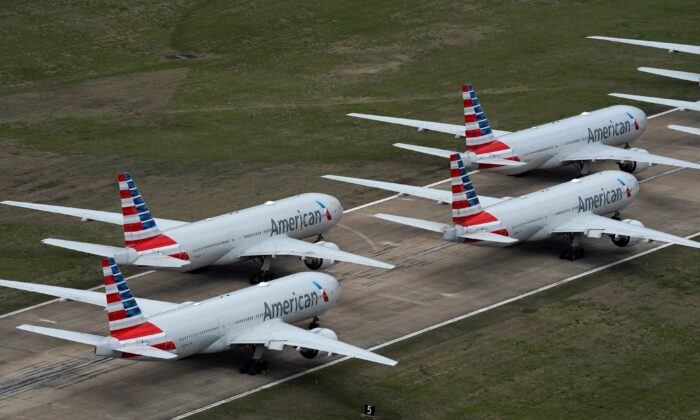 American Airlines and Southwest Airlines announced on Tuesday that they would follow President Joe Biden’s executive order requiring that employees be vaccinated against COVID-19 by Dec. 8, defying Texas Gov. Greg Abbott’s executive order blocking mandates by any entity in the state.

The companies, both based in Texas, argued that Biden’s mandate supersedes Abbott’s, which was issued on Oct. 11. The Republican governor said in a statement upon issuing his executive order (pdf) that the COVID-19 vaccine “should remain voluntary and never forced.”

Southwest Airlines told The Epoch Times in an email that it “would be expected to comply with the President’s Order to remain compliant as a federal contractor.”

American Airlines meanwhile said that although it was reviewing Abbott’s order, “this does not change anything” for the company. “We believe the federal vaccine mandate supersedes any conflicting state laws,” the carrier told The Epoch Times.

The carriers are among the state’s largest employers.

Southwest Airlines added, “There is much work to do regarding this requirement and its compliance. We don’t want any employee to lose their job over a vaccination issue. We have every intention of working with our employees as best we can. But for us to do this, we need our employees to either let us know if they are vaccinated or make the request for accommodation.”

The company said that as the Nov. 24 deadline approaches, “we may find we need more time to process all of our employee’s requests for exemptions.”

U.S.-based employees for both carriers have been asked to provide proof of vaccination against COVID-19, the disease caused by the CCP (Chinese Communist Party) virus, by Nov. 24.

Despite the carriers’ latest announcements, Southwest Airlines CEO Gary Kelly told CNBC on Tuesday that he has “never been in favor of corporations imposing that kind of a mandate,” adding that the company only imposed one because of Biden’s executive order.

White House press secretary Jen Psaki has accused Abbott of “putting politics ahead of health” with his executive order on Monday.

“It’s not based on what is in the interest of the people you are governing,” she told reporters in Washington. “We’re going to continue to implement the law—which the president of the United States has the ability, the authority, the legal authority to do—and we are going to continue to work to get more people vaccinated, to get out of this pandemic.”

Abbott has called Biden’s executive order “an assault on private businesses” and previously said that the state is working to halt “this power grab.” More than a dozen states have resisted the president’s mandate.

Abbott’s press secretary, Renae Eze, told The Epoch Times that the governor’s executive order aims to protect Texans from having to make the choice between getting the COVID-19 vaccine and losing their jobs.

“Governor Abbott has talked to countless Texans who are worried about losing their jobs because of this federal overreach,” Eze said in an email. “The Biden Administration has left Texans in the impossible position of having to choose between providing for their families or being fired for not getting the COVID vaccine because of their religious belief, medical condition, or personal conscience.”

“And they have left employers with the unfair choice of either violating federal regulations or losing their valued employees,” the press secretary added.

Abbott intends to put his order before a special session of the state House and Senate, which would pave the way for the legislature to enshrine it into law.

Texas Attorney General Ken Paxton, a Republican, told The Epoch Times that he hopes the legislature passes a law to ensure that employees can make their own health decisions and cannot be discriminated against, or lose their job as a result.

“When you’re affecting people’s ability to ever work again and taking away their livelihood, that’s a pretty big impact … and something that should be a personal decision, not some company or government telling them what to do, because those companies don’t have to live with the long-term consequences of that decision. So that seems wrong and unfair to me.