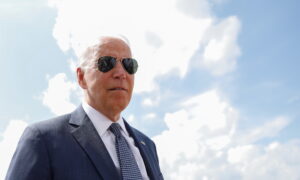 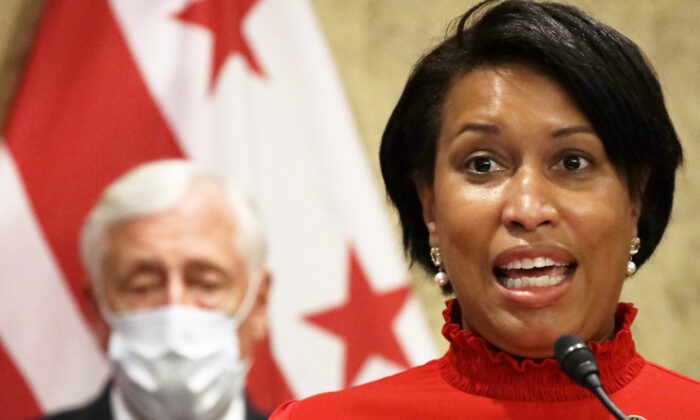 Washington Mayor Muriel Bowser appeared to be celebrating at an event, maskless, hours before her own policy that mandates masks for citizens in the district was put into effect.

One picture that was uploaded to social media shows the Democratic mayor on July 30 surrounded by a large crowd of people, none of whom appear to be wearing masks, at a gathering two days prior to her 49th birthday.

A second picture shows her next to award-winning celebrity comedian Dave Chappelle along with three other people, none of whom had their faces covered.

The picture was taken for Chappelle’s return to Washington on July 30, where the comedy icon appeared at two notable district venues over the weekend, according to a statement by Bowser’s office.

“D.C. is open, and we are so proud to welcome home Dave Chappelle,” Bowser said. “Washingtonians have waited months to be able to enjoy shows like this one again, and it makes it even sweeter to be able to reopen one of our favorite venues with a performance from one of the world’s most beloved comedians and a D.C. native.”

Chappelle’s appearance marked the first live public event at The Anthem since March 2020. According to the statement, everyone was required to mask up at both the John F. Kennedy Center for the Performing Arts and The Anthem.

A new mask rule was announced by Bowser on July 29, requiring every resident 2 years and older to wear a mask indoors in Washington, effective on July 31 at 5 a.m.

Bowser, who has been criticized in the past for ignoring her own CCP virus restrictions after visiting a “high-risk state,” is now facing a second round of backlash after she was seen not masking up.

Although the photos were taken shortly before the mask mandate went into effect and the mayor wasn’t technically breaking her own rules, the pictures, which have since gone viral, made people ponder how concerned the mayor is about the virus.

“She’s a true believer it looks like! Just hours away from her mandate,” one person wrote on Twitter.

“So much hypocrisy,” another commenter wrote.

The mayor stated on social media on July 31, just hours after she was seen at the event housing more than 20 people without a mask, that by “masking up,” the community can be protected.

“Let’s stay in this together, DC,” Bowser wrote on Twitter. “By masking up, we can protect our community and keep DC open.”

According to mask guidance (pdf) by city officials, people who are fully vaccinated against the CCP virus can attend outdoor activities without a mask or social distancing. It’s unclear if those attending the gatherings had been inoculated against COVID-19.

On Aug. 1, one day after Bowser’s new policy requiring masks was put into effect, she was once again seen without a mask at a wedding that she officiated.

The pictures, obtained by the Washington Examiner, show Bowser maskless at a table not actively eating or drinking. As a reporter for the agency tried to approach the mayor and ask why she was maskless at an event legally obligated to enforce mask compliance, security blockaded the journalist.

Bowser’s office has since pushed back against the criticism, saying that any photos taken of her indoors without a mask were during dinner.

“If Mayor Bowser was photographed indoors without a mask, it was during the indoor dinner, when she was eating or drinking,” the office said in a statement.

The mayor was previously criticized in November, after she traveled to Delaware to attend the victory speech of President Joe Biden in the 2020 presidential election, despite the state being listed as high risk for the CCP virus at the time. She later defended her trip as “essential travel.”

She also said the trip was under official government business and “excepted under mayor’s order.”