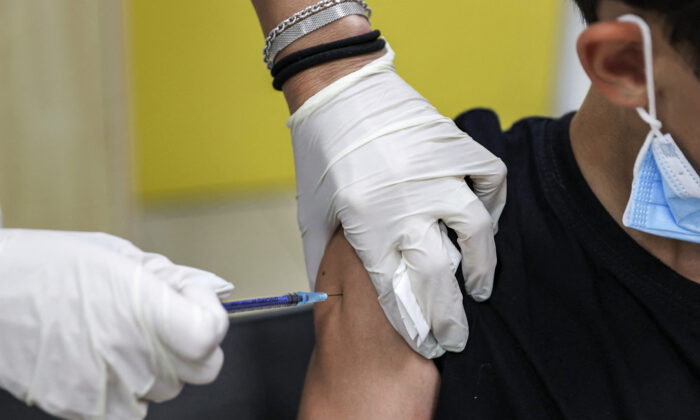 A boy receives a dose of the Pfizer/BioNTech COVID-19 vaccine in Holon, Israel on June 21, 2021. (Jack Guez/AFP via Getty Images)
AMERICA

Health officials in Santa Clara County, California, announced a drop in the county’s COVID-19 death toll after it refined its data-reporting systems.

After using a new approach to review COVID-19-related fatalities, county officials said the death toll from the virus dropped 22 percent from 2,201 to 1,696 deaths.

Authorities told a CBS affiliate station that it came up with narrower criteria for deaths attributable to COVID-19, which is caused by the CCP (Chinese Communist Party) virus, otherwise known as the coronavirus. Officials had previously counted COVID-19 deaths by including people who died while infected with the virus, even if it didn’t actually contribute to their cause of death.

For example, according to the San Jose Spotlight citing local officials, someone who died in a car crash but had COVID-19 at the time would be counted as a “COVID-19 death.”

“We are constantly trying to get the best information to county residents as soon as we have it,” a Santa Clara County spokesperson told San Jose Spotlight. “In the height of the pandemic in January, we were unfortunately hearing about multiple deaths every day and couldn’t wait the several weeks for the death certificate to notify the public of our community members who were dying.”

The process, Rudman said, was being carried out during the height of the COVID-19 pandemic and said it “was the right decision at the time.” She didn’t elaborate as to why.

“Now we’re able to do that deep review of the death certificates to make those detailed assessments,” she said.

A similar scenario unfolded last month in nearby Alameda County when officials revised (pdf) the death total from the virus—with fatalities dropping 1,634 to 1,223, or around 25 percent, once the data was updated.

“It is important to go back and do this accounting to see if COVID was actually the cause of death,” said University of California San Francisco Prof. of Medicine and Infectious Disease expert Dr. Monica Gandhi, according to CBS San Francisco. “I think that transparent communication is an upside, I mean, in the sense that it’s true that if we did this across the nation, it would bring our death rate lower. A downside of that, could be that people will say, ‘Well, it wasn’t as serious as you said.’”

Gandhi told the news outlet that the U.S. Centers for Disease Control and Prevention (CDC) may ask all counties in the United States to revise their death reporting methods, adding that the nation could see a drop in its overall COVID-19 death told.

The Epoch Times has contacted the Santa Clara County health agency for comment.