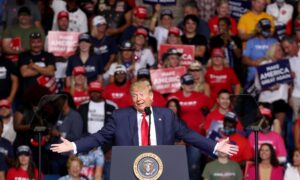 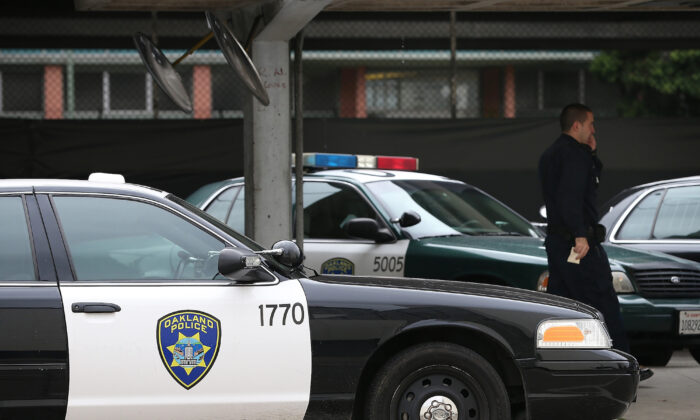 A police officer walks by patrol cars at the Oakland Police headquarters in Oakland, Calif. in a file photo. (Justin Sullivan/Getty Images)
Viewpoints

To the extent that police work is done rightly, cops are a blessing to society. They often risk their lives to defend the lives and property of citizens who are total strangers to them, and ride to the rescue after a wide variety of natural disasters and accidents.

Their work exposes them to some of the grimmest aspects of human life—child abuse and neglect, domestic violence, human beings wasted and families destroyed by drug abuse, the tragic carnage of crime, and badly mangled bodies after vehicular crashes and other types of accidents.

In the course of their work, they sometimes get cursed at, spat upon, attacked, and shot at.

Face it: Most of us couldn’t handle a job like theirs. And yet, in spite of all the trials and tribulations, there are cops who go above and beyond the call of duty. They may not all be as generous as Baltimore County police officer Seth Templeton, but many freely give time and even money to help people in their hour of need. Such cops are heroes and role models.

As for protesters, many of them are as All-American as the best cops are. What could be more American than exercising the First Amendment right “peaceably to assemble” and “to petition the government for a redress of grievances”? And what could be a greater grievance than the very agency that exists to defend us—government—doing the opposite and stripping citizens of their fundamental rights? Like our country’s founders, brave Americans resist the oppression of officialdom and rightly protest encroachments against their unalienable rights.

Sadly, the reputations of both cops and protesters have been seriously damaged by “bad apples”—individuals who have crossed the all-important line from lawful and proper conduct to criminal behavior. The egregious misconduct of some has triggered cynicism and distrust against police and protesters in general. What can be done to heal the societal wounds?

Let’s look at cops first. The death of George Floyd horrified millions and galvanized the nation into a readiness to act decisively to end such injustices. Among the most extreme reactions to the Floyd death have been calls to defund or dismantle police departments. Those favoring such drastic actions are guilty of irrational bigotry and practical stupidity.

Regarding bigotry: To argue that all police should be banished because some bad apples have acted with excessive force is just as prejudiced as racist whites who despise all blacks because some blacks have done nasty things. As for being stupid, looters, thieves, arsonists, and other criminals and revolutionaries would like nothing better than to operate in cop-free zones. Is that what peaceful, law-abiding people really want?

That being said, there definitely are police reforms that should be considered.

1. Screen applicants more thoroughly before hiring them and evaluate them more frequently after they are hired. Beyond the obvious need to weed out those with racist tendencies, beware of loners who couldn’t get along with others in school or the alpha male bullies who like to dominate others. Such individuals should never be turned loose on the public with guns and badges.

2. Have more counselors available. The horrors that many police officers see can traumatize and damage them psychologically, causing even basically good and decent cops to lash out in anger and pain.

3. Police unions need to stop protecting bad cops. Protecting the jobs of bad apples is the moral rot at the heart of too many American unions. I saw this decades ago as a janitor for Chrysler. One fellow regularly showed up so drunk or stoned that he slept through his entire shift, yet the company didn’t move to fire him because the union would fight it tooth and nail.

What unions need to realize is that they’re hurting their own members by defending bad apples. The union policy of solidarity without standards led to many of the good men I worked with eventually losing their jobs to more efficient foreign car manufacturers. Unions will best serve their members by adopting a policy of, “You employers must pay us the highest wages and in return, we will supply the best workers.” This holds true whether the union represents autoworkers or cops. Stop defending abusive cops and you’ll see a marked improvement in police/community relations.

4. End the obnoxious harassment of stopping motorists for “driving while black.” For cops to assume the arrogant attitude that they’re lords over local fiefs, and they’re constantly going to remind black citizens who’s boss, is both un-American and immensely counterproductive. Cops exist to serve, not to bully, oppress, or harass. If it looks as though a law has been violated, then police are empowered to act. Since it’s not illegal for blacks to drive fine automobiles, cops shouldn’t pull over black drivers without just cause—i.e., for a traffic violation or in response to a report from headquarters that a vehicle matching a certain description has been stolen.

To ensure that cops only detain motorists (black or white) for legitimate reasons, cops should record all their interactions with the public, so that there’s clear evidence whether they’re being respectful or obnoxious toward civilians. It should be standard operating procedure that a cop who stops a car immediately inform the driver why he/she has been stopped (e.g., illegal turn, speeding, headquarters has reported a similar model as having been stolen, etc.) rather than stopping vehicles because a cop is bored or feeling ornery.

Let’s go back to Square One: What’s the raison d’être for police? Under the American concept of governance as articulated in the Declaration of Independence and the Fifth Amendment to the Constitution, the sacred rights of individuals—to life, liberty, and property—are primary. The sole legitimate purpose of government is to act as an agent deputed by the principals (the citizens) to assist them in maintaining and protecting those rights.

This principal/agent relationship is crucial. It’s the reason why the many statutes and ordinances that restrict law-abiding Americans from carrying guns are wrong. It makes no sense to say that cops (our agents) can carry guns on our behalf but we, the principals, can’t. Further, cops aren’t only agents but principals, too. They have every bit as much a right to shoot someone in self-defense as anyone else does.

Just as police forces need to weed out their bad apples, so protesters have a role to play in keeping their own worthy cause from being hijacked and sullied by bad apples. Protesters must know that if they march down city streets through business districts, looting is likely to break out. It happens with numbing regularity and predictability.

Two classes of criminals—common thieves and warped, know-nothing thugs in the thrall of various revolutionary ideologies—piggyback on legitimate protests and use them as a cover for rioting, looting, and destruction. These bad apples make a mockery of protesters’ calls for justice by trampling the rights of innocent people, destroying or stealing their property, and sometimes physically attacking people who get in their way.

So, is there anything that those exercising their First Amendment right to assemble peaceably can do to keep their public protests from providing a pretext and enabling criminal conduct? This is a more difficult problem than police reform, since police forces are relatively small and much is known about each officer, whereas, in large protest crowds, there may be many thousands of protesters, most of whom are total strangers to each other.

One potential solution might be to organize protest meetings at their city’s largest sports stadium. Stadiums have the obvious advantage of keeping potential looters from exploiting the cover of peaceful marchers to prey on innocent businesses in a city’s downtown area.

Other advantages of rallying in a stadium include a large capacity so that more protesters could mass together to see each other in larger numbers and to feel the emotional power of their cheers and applause (there’s nothing quite like a stadium to amplify the roar of the crowd); a built-in public address system with which speakers could address the crowd; greater ease of media coverage; less stuff for looters to steal; and an improved ability to keep anyone who started behaving destructively from escaping.

Other possible sites less conducive to trashing business districts would be the athletic fields of schools or public parks. Protesters definitely need to find alternatives to the current, crime-ridden format of their protests. That would make the sincerity of their appeals for justice far more credible.

Both cops and protesters need to find ways to keep their ideals and goals from being spoiled by bad apples in their midst—not only for their own benefit, but for the benefit of us all.