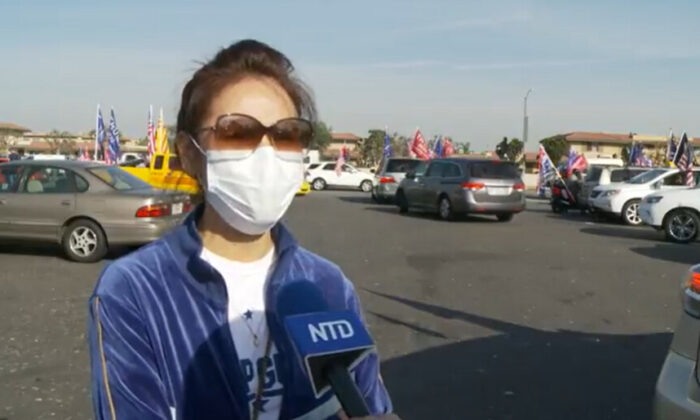 Chinese Warn Against Communism at Trump Rally, Tell Americans to Speak Out

LOS ANGELES—Sandy Chu joined protests against election fraud on Nov. 21, because the communist culture of China that she wanted to leave is something she sees permeating the United States already.

“I’m standing with Trump,” she said in English before switching to Chinese. “Everyone needs to know about this election fraud, and this is the biggest attack on American democracy; we have to stand up and protest. If we don’t all speak out now, American elections will never be free and fair again.”

She added that the big media outlets in America are acting just like the state run media back in communist China.

“They sound just like them, all falling in line to support Biden. It’s exactly the way state media is run,” she said. “If we don’t resist this, and Trump is not elected, then America will go the way of communist China, where the people are controlled. We will lose our freedoms.”

Emily Yang said America’s future could look very different depending on how the election fraud allegations are resolved.

“Trump’s policies are for America, they’re for the good of American people,” she said in Chinese. To see this election stolen, she said she had only one word for it, in English: “Disgusting.”

“I can’t believe that,” she said. “It’s unimaginable, but there is plenty of evidence that there truly is fraud; it’s dishonest and a huge blow to democracy.”

She said worries about America’s future if there is a Biden presidency, because of the ties the family has to China, which could be a way for the Chinese Communist Party to further gain a foothold in America.

She hopes there is recovery and renewal for America and its freedoms.

“Let it be decided at the ballot box, this is fundamental,” she said.