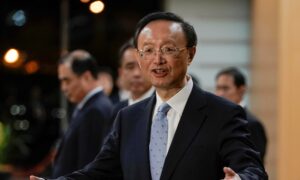 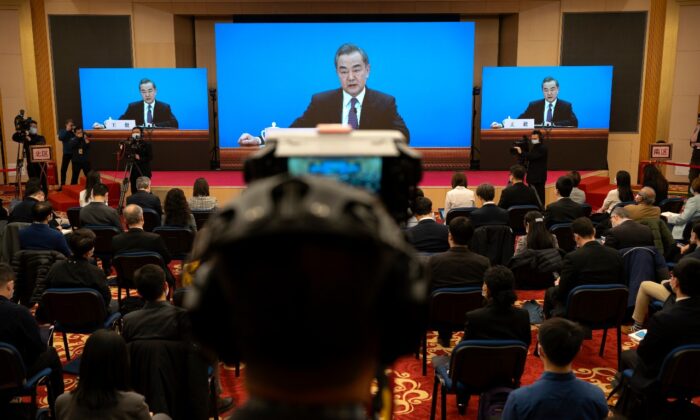 Foreign Minister Wang Yi also called on the United States to remove “unreasonable” curbs to cooperation as soon as possible.

The remarks, which occurred at a press conference on the sidelines of the annual meeting of the regime’s rubber-stamp legislature, echoed previous demands by Beijing since President Joe Biden took office.

Top Chinese Communist Party (CCP) officials have implored the administration to roll back Trump’s tough-on-China policies, focus on cooperation on issues such as climate change, and not to “interfere” in what the regime dubs “red line” issues, including its human rights abuses against Uyghur Muslims in Xinjiang, the crackdown in Hong Kong, and military aggression toward Taiwan.

Wang called the CCP’s claim to Taiwan an “insurmountable red line,” an issue about which the regime “has no room for compromise.” The regime has vowed to bring Taiwan under its fold, which split from the mainland when the CCP took power in 1949, by force if necessary.

He urged the Biden administration to “completely change the previous administration’s dangerous practices of ‘crossing the line’ and ‘playing with fire,’” in relation to Taiwan.

The Trump administration enhanced U.S. support of Taiwan by increasing arms sales for its self-defense and sending Cabinet officials to the island.

Earlier this week, former national security adviser H.R. McMaster described the threat of the Chinese invasion of Taiwan as the world’s “most significant flashpoint” that could lead to a “large-scale war,” and urged the United States to continue to help Taiwan fortify its defenses against a possible attack.

The Biden administration has previously described its commitment to Taiwan as “rock solid.”

A spokesperson for the U.S. State Department told The Epoch Times that the administration urges “Beijing to cease its military, diplomatic, and economic pressure against Taiwan and instead engage in meaningful dialogue with Taiwan’s democratically elected representatives.”

“The United States continues to express our strong concerns to Beijing regarding the troubling pattern of ongoing PRC [People’s Republic of China] attempts to intimidate its neighbors in the region, including Taiwan,” the spokesperson said in a March 7 email.

Wang also said U.S.–China relations need to be predicated on both sides abiding by “the principle of non-interference in each others’ internal affairs.”

“It is hoped that the United States and China will meet each other halfway and lift the various unreasonable restrictions placed on Sino–U.S. cooperation to date as soon as possible, and not create new obstacles artificially,” he said.

The Biden administration earlier last week singled out the “growing rivalry with China” as a key challenge facing the United States. Secretary of State Antony Blinken also described U.S.–China ties as “the biggest geopolitical test” of this century.

“Our relationship with China will be competitive when it should be, collaborative when it can be, and adversarial when it must be,” Blinken said on March 3.

Wang defended the CCP’s plan to change Hong Kong’s electoral system in a way that would further tighten its control over the city. The proposal would give a pro-Beijing committee new power to nominate Hong Kong legislators. The United States on March 5 decried the move as “a direct attack on Hong Kong’s autonomy … freedoms and the democratic processes.”

Wang, meanwhile, said the changes would protect the “rights of Hong Kong residents and the legitimate interests of foreign investors.”

Also on March 7, the foreign minister rejected growing condemnation of its rights abuses against Uyghurs in the Xinjiang region.

More than 1 million ethnic Muslim minorities are detained in a network of internment camps in the region, where they are subjected to forced labor, torture, rape, and political indoctrination. The Trump administration in January designated the CCP’s actions as a genocide, followed in recent weeks by the Canadian and Dutch Parliaments.

“The so-called existence of genocide in Xinjiang is absurd. It is a complete lie fabricated with ulterior motives,” Wang said.

State Department spokesperson Ned Price on March 5 said the administration was “galvanizing collective action, to make clear that these sort of abuses against human rights in Xinjiang and elsewhere will not be tolerated.”

This article was updated to include a statement from a U.S. State Department spokesperson.