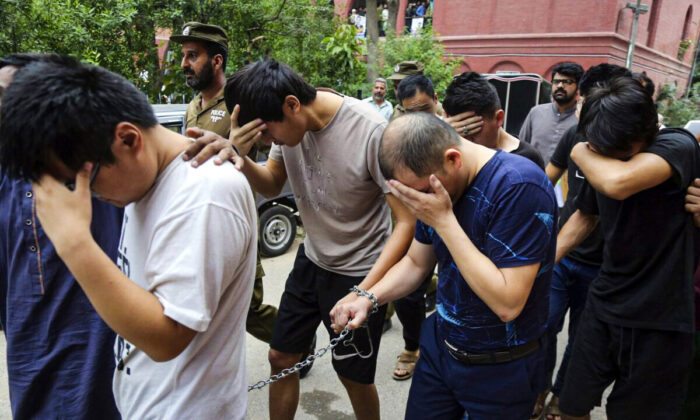 Detained Chinese nationals, accused of involvement in a trafficking gang to lure Pakistani women into fake marriages, try to shield their faces while they are escorted by Pakistan's Federal Investigation Agency officers to court in Lahore, Pakistan, on May 11, 2019. (K.M. Chaudary/AP Photo)
Social Issues

The “Iron Chain Woman” human trafficking scandal in Xuzhou City of China’s Fengxian County, Jiangsu Province, has been receiving unabated attention on China’s intranet-like Internet. Lao Dongyan, a professor of law at Tsinghua University, was silenced after posting a comment about this scandal.

Lao had been following the”Iron Chain Woman” scandal since Jan. 31 and was reposting related articles on WeChat every day.

In one of the WeChat posts, she wrote, “The Fengxian scandal will definitely be recorded in history, and we are witnessing history and participating in it. Although I don’t have much expectation for the result, I am glad that we did not give up.”

Later, Lao’s WeChat was banned and all the teachers of Tsinghua University also received a notice demanding that they keep silent on the case.

According to a whistleblower teacher, the administration of Tsinghua University posted in the teachers’ WeChat group on Feb. 21 a notice that read: “All teachers this semester will be notified verbally, it is forbidden to discuss the Xuzhou “Iron Chain Woman” scandal in the classroom. The offenders will bear the consequences.”

On the afternoon of Feb. 25, The Epoch Times contacted the Office of the President of Tsinghua University to inquire about the notice. A staff member who answered the phone said that the principal’s office did not issue this notice, nor did it send this notice to teachers in the name of the school.

Zhuge Mingyang, an independent commentator, said of the incident, “Oftentimes, in order not to leave evidence, many notices from the Chinese government at all levels are communicated orally over the phone. Once exposed or held accountable, they can prevaricate and deny, leaving people unable to find the source of the notice.”

The reason why Lao’s WeChat was blocked is that she wrote and posted an article “Facing the Real World” on Jan. 29, in which she documented Chinese people’s struggles in 2021. Anyone could have faced strict lockdown measures at anytime in this year, she said. Many patients needing urgent care died because the system prevented them walking through the hospital door. Blinded by the authority’s regulations, people turned a blind eye to the suffering of others causing further suffering, Lao wrote.

Lao said that in a society full of discourse about positive energy, the sense of unease spreads rapidly, and the pursuit of freedom often becomes the object of ridicule. The gradual centralization of power, various restrictions in the name of security, and big tech domination based on data tracking are increasingly manifested in Chinese society, she said. People are increasingly showing an attitude of indifference or even welcome.

Lao also wrote that, in a dream, “I heard the sound of the state machine crunching and turning, lacking warmth, but appearing rational and cold. If one day I can’t speak anymore, I don’t regret that I have spoken.”

As a result, Lao’s WeChat was blocked. On Feb. 19, she opened a Weibo account to discuss the “Iron Chain Woman” scandal, but was banned after only two posts.

Mr. Yang, a lawyer in Changsha City, Hunan Province, who isn’t releasing his full name due to potential repercussions, told The Epoch Times that the CCP has always called itself the world’s second largest economy; how could it allow such a humiliating affair as the “Iron Chain Woman” to continue to spread? So it is blocking it, he said.

Lawyer Yang said, “Freedom of speech in China is only limited to the words in the provisions of the Constitution, and it is for foreigners to see.”

The “Iron Chain Woman” scandal is still unresolved, and many cases of missing women have been reported across China.

Recently, the family of Yu Chunhong, a female doctor from Xi’an Jiaotong University who has been missing for 28 years, also sought help online. Yu Chunhong was admitted to the university’s Department of Energy and Power Engineering in 1986, majoring in nuclear reactors. In 1990, she continued her master’s degree in the major. In 1993, she was admitted to the university for a doctoral degree. After the Chinese New Year in 1994, she disappeared on her way back from campus. It has been 28 years since she was last seen by her family.

According to a report by The Paper on Feb. 23, the family of Wu Lina, a female college student from Chuzhou, Anhui, who has been missing for 20 years, also began to search through the Internet. Wu Lina disappeared near the old railway station in Chuzhou on May 6, 2002, when she was only 20 years old. The Paper then deleted the relevant content, but did not provide a reason for its removing the news story.

Reports have also documented numerous kidnapping incidents of women from the streets of Harbin in Heilongjiang Province. On the afternoon of Feb. 20, a ten-year-old girl on a street in Harbin was followed by a strange man on her way home. She was hugged from behind and almost kidnapped. The girl struggled desperately, and was rescued by a good Samaritan who was passing by.