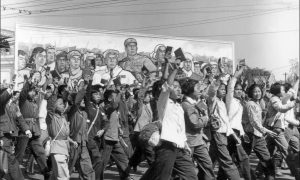 Chicago authorities said Sunday that gun violence in the city saw at least 47 victims shot, including five who died, according to ABC7Chicago.

In one incident cited in the report, six people were shot on Saturday morning in Chicago in a single incident, which involved an unidentified gunman opening fire into a crowd.

Darryl Martin, who told the outlet he witnessed the shooting, described it as a “conversation with bullets; people were shooting it out.”

It comes on the heels of a report last week from the Chicago Police Department (pdf), which noted 2,898 shooting incidents so far this year, compared to 1,899 by the same time in 2019, a 53 percent increase. The report also noted that homicides in Chicago were up by the same percentage, with 692 so far in 2020, compared to 451 by the same period last year.

Violent and property crime across the United States have fallen significantly since the early 1990s, when crime spiked across much of the nation, according to statistics published by the FBI and the Bureau of Justice Statistics (BJS), the statistical arm of the Department of Justice.

The violent crime rate fell 49 percent between 1993 and 2019, according to FBI statistics, with large drops in the rates of robbery (-68 percent), murder/non-negligent manslaughter (-47 percent) and aggravated assault (-43 percent). The same source found that the property crime rate fell 55 percent, with significant drops in the rates of burglary (-69 percent), motor vehicle theft (-64 percent) and larceny/theft (-49 percent).

Still, while data shows crime has fallen, Americans tend to believe crime is up nationally, according to a recent Gallup survey. It found that 78 percent of Americans believe there is more crime in the United States compared to a year ago, up 14 percentage points from last year and reminiscent of figures not seen since the early 1990s.

At the same time, the Gallup survey found that Americans’ perception of increased crime in their local area is down slightly compared to last year, with 39 percent saying there was more local crime in 2020 compared to 2019, while 38 percent expressed the same view in 2019 relative to 2018.