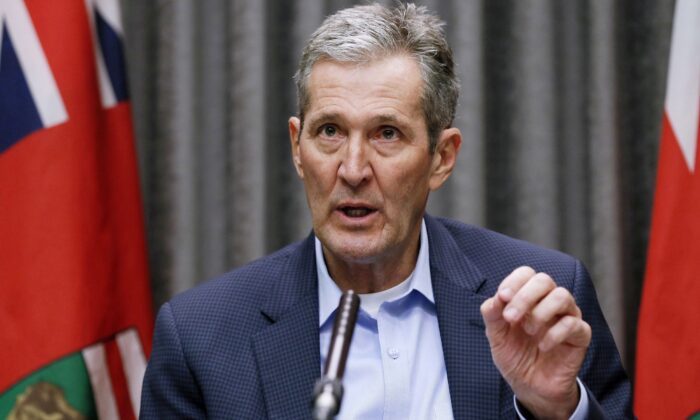 Manitoba Premier Brian Pallister speaks during a COVID-19 press conference at the legislature in Winnipeg on March 26, 2020. (The Canadian Press/John Woods)
Canada

As provinces begin opening their economies, the premier of Manitoba as well as the Official Opposition and think tanks are warning that federal programs introduced to cushion the impact of the lockdown may discourage people from returning to work.

“A lot of provinces were in a tough fiscal situation before this started. Now they’re faced with huge health-care costs and big revenue drops,” Philip Cross, a former chief economic analyst at Statistics Canada, said in an interview.

On May 4, many provinces took baby steps to re-start the economy. In Manitoba, as patios, dentists, and hair salons re-opened, Premier Brian Pallister warned that federal benefit programs could have “perverse potential outcomes” and “unintended consequences” by paying people to stay at home.

“I’m not discounting the need for people to get supports and I have thanked … the federal government for introducing these programs. But I am cognizant of the real, potentially dangerous consequences of rewarding people for not looking for work,” Pallister told the CBC.

“At a time when our economy needs stimulus, Justin Trudeau has given it a tranquilizer and risks creating labour shortages across the country. This failure must be reversed before it is too late. Canada’s economic recovery depends on it,” Scheer said.

More than 7.3 million Canadians have applied for the Canadian Emergency Response Benefit. Those who are eligible are getting $2,000 a month for up to four months. Current CERB guidelines don’t allow recipients to earn more than $1,000 per month.

“A gradual phase-out of the benefit as people earn more and more, we believe, would encourage and incentivize people to re-enter the workforce,” Scheer said.

Scheer’s proposal is similar to one put forward by the C. D. Howe Institute, suggesting that Ottawa implement “income-tested CERB clawbacks” for those returning to work.

According to C.D. Howe president William Robson, employers were already complaining about employees who told them they preferred to stay home.

“CERB helped cushion COVID-19’s impact. But it now threatens to impede the recovery,” Robson wrote in a National Post op-ed, noting that CERB recipients are not required to actively seek work or even be “ready and willing” to do so.

Cross, a senior fellow at the Macdonald Laurier Institute, says the provinces are eager to reopen the economy because they can’t borrow and print money the way the federal government can.

“We’ve already seen Pallister, for example, ask the federal government to do all of the borrowing for the provinces because [Ottawa] can borrow more cheaply.”

He says constant media updates on new cases and deaths put safety at the top of the public’s mind, but notes that social isolation and economic pressures will undermine people’s health and lives in other ways.

“We know from past severe recessions that when people lose jobs, the suicide rates goes up, substance abuse goes up, domestic strife, marriages come under pressure and so on. We know that youth who enter the labour market during a recession suffer long-term damage—literally lifetime earnings decline.”

Prime Minister Justin Trudeau has continued to voice caution as some provinces open up for business. He told Canadians on May 4, “Don’t go out unless you absolutely have to. And if you do, keep two metres apart from each other.”

Quebec Premier Francois Legault announced elementary schools would reopen May 11, but Trudeau wasn’t sure he would return his children to class if he still lived in Quebec.

“I don’t know,” he said on the TV program Tout le monde en parle. “It’s a very personal decision for many, many parents.”

Trudeau said in that situation he would request details on how the school would enforce public health recommendations, then “make that decision probably at the last minute.”

University of Saskatchewan Professor Joseph Garcea told The Epoch Times it’s a tricky balance to implement the right policies in the evolving situation.

“I think the adjustment will probably come in time. The question is how quickly can you expect to move in one direction and then all of a sudden start moving in another direction. That is the challenge. Because then you get criticized for going too fast forward, slowing down, going sideways, and then the real criticism starts.”

Cross points out that if too many people think of the short-term situation instead of the long game, 2020 may provide a different kind of hindsight.

“If your employer goes bankrupt and there’s no job to go back to, you’re not going to be unemployed without income for a couple of months, you’re going to be unemployed for possibly a long time,” he says. “And as that reality starts to sink in, I think you’ll see people get more and more awake to economic factors.”