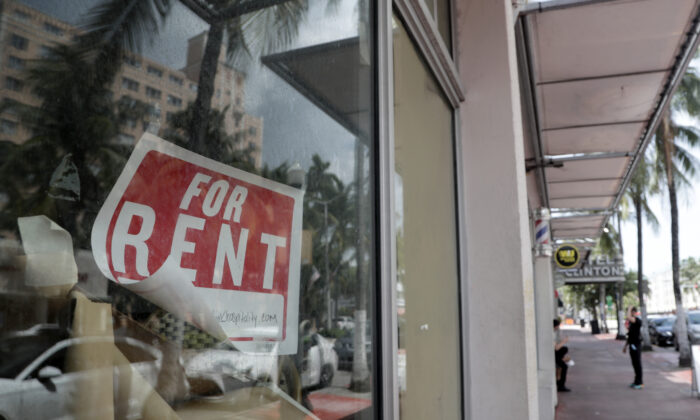 FILE - In this July 13, 2020 file photo, a For Rent sign hangs on a closed shop during the coronavirus pandemic in Miami Beach, Fla. Having endured what was surely a record-shattering slump last quarter, the U.S. economy faces a dim outlook as a resurgent coronavirus intensifies doubts about the likelihood of any sustained recovery the rest of the year. (AP Photo/Lynne Sladky)
Policy

The Centers for Disease Control and Prevention (CDC) announced a 60-day moratorium on Tuesday, a day after the White House said the agency didn’t have the authority to do so.

The order (pdf) is intended to target “specific areas of the country” where cases of the CCP (Chinese Communist Party) virus are rapidly increasing and “likely would be exacerbated by mass evictions,” the CDC said, noting the recent surge in cases across the country.

This will apply to about 80 percent of U.S. counties or about 90 percent of the U.S. population, where the rates of transmission of COVID-19 in the community are deemed substantial or high, according to the CDC.

“The emergence of the Delta variant has led to a rapid acceleration of community transmission in the United States, putting more Americans at increased risk, especially if they are unvaccinated,” Rochelle Walensky, the CDC director, said in a statement. “This moratorium is the right thing to do to keep people in their homes and out of congregate settings where COVID-19 spreads.”

More than 15 million people in 6.5 million U.S. households are currently behind on rental payments, according to a study by the Aspen Institute and the COVID-19 Eviction Defense Project, collectively owing more than $20 billion to landlords.

The moratorium was extended for another 30 days in June and officials at the time said it would be the final extension, which expired on Saturday.

The Supreme Court ruled in late June that any extension to the moratorium would have to be approved by Congress. A federal court later ruled in July that the CDC had overstepped its authority in halting evictions.

It remains unclear if the Supreme Court will regard the new moratorium differently, given that it is more limited in scope.

President Joe Biden on Sunday asked for a new scaled-down moratorium, but the CDC at the time turned down the request, saying it lacked legal authority owing to the June Supreme Court decision.

Biden was urging an extension and wanted some $40 billion of unused money approved by Congress to help pay unpaid rent to be distributed to renters and landlords.

But on Monday, White House spokesperson Jen Psaki said the administration lacks the “legal authority for a new, targeted eviction moratorium,” despite a push from a growing number of Democrats asking the administration to take action.

No congressional action could be taken because the House of Representatives had adjourned on Friday for its scheduled August recess.

Biden on Tuesday acknowledged the legal risks of moving ahead with a new moratorium but said it will probably give some “additional time” to renters as the issue makes it way through the courts.

He also called on state and local governments to extend or put in place eviction bans for at the least the next two months, according to Psaki.

“Today is a day of extraordinary relief,” she wrote. “Thanks to the leadership of @POTUS the imminent fear of eviction and being put out on the street has been lifted for countless families. Help is Here! Democrats have worked tirelessly for this action, which is based on public health needs.”

She added, “This brand new moratorium will provide time for the money allocated by Congress to flow, as it helps stop the spread of the virus. I am especially pleased about what this means to the children who have had uncertainty about their housing, their health and their education.”

Some states like New York and California have already extended state eviction bans past July 31.