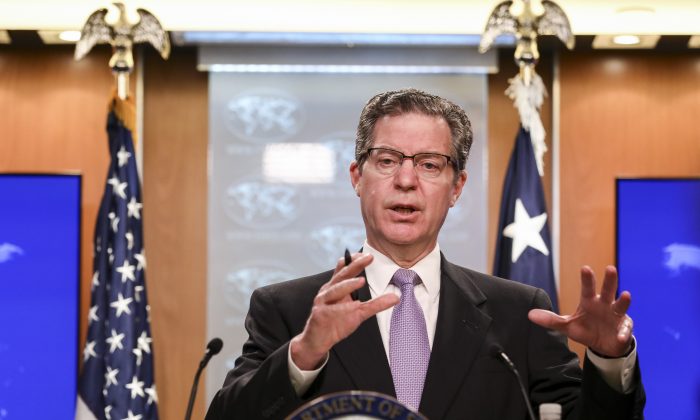 Former U.S. Ambassador at Large for International Religious Freedom Sam Brownback said that the way the Chinese Communist Party (CCP) treats its people “reveals a lack of confidence in their position” and that the CCP “is hurting Chinese people’s future.”

In an interview with the Chinese Edition of The Epoch Times on Oct. 14, Brownback gave his view on the current situation in China, the CCP’s criminal practice of forced organ harvesting, and the “Quit the CCP” movement.

Brownback commented on the CCP’s 20th national congress convening on Oct. 16: “you have a major party convention, but there’s no freedom for people to come forward to talk about or debate any issues. It’s a dictatorship. [CCP chief] Xi Jinping ruthlessly puts down anybody that speaks against what he says.”

“Xi’s leadership is going back to more of the hardline communist Mao type of governance and is particularly harmful to the Chinese people. I think it really reveals a lack of confidence in how they view their position as government of China.”

Brownback went on to say that: “the situation in Hong Kong has been horrific. The 90-year-old Cardinal Zen, who has been an honorable man and a key spiritual leader in Hong Kong for decades, is being tried on ridiculous charges—fallacious charges!

“Those actions speak volumes of what the CCP thinks of human rights and individual rights.”

“We are just completely different systems. The United States is a very faith-oriented nation. Our motto is ‘In God we trust.’ The CCP is anti-religion. They are at war with everything. They decimate groups like the Falun Gong, or the Tibetan Buddhist, or the Uyghurs in Xinjiang, or the Christians.

“The CCP signed the United Nations Charter of Human Rights, but they don’t provide it to their own people at all,” the former ambassador said.

“I think the American people have realized the evil of the CCP and the government is coming around now to break these ties with China. But a number of corporations in the United States are connected with China and don’t want to walk away from it.

“As China continues to align itself with Russia, Iran, those really rogue nations, and with other very dictatorial regimes, like North Korea, a new Cold War type of status between the United States and China is happening,” he said.

“You’re seeing the world split into two spheres again, like we had during the Cold War with the Soviets. And you’re seeing that happening between the United States and China now.”

A peer-reviewed study published in a top U.S. medical journal revealed evidence of Chinese physicians acting as executioners by procuring organs from living people and killing the so-called donor in the process. The lucrative transplant business in China has been fueled by such practices.

Brownback said he has been tracking this issue for 15 years: “the Chinese government is allowing these physicians to do something that’s internationally deemed illegal, immoral and unethical.

Brownback thinks that the U.S. government should conduct its own investigation and the international community should pass laws to address CCP’s crimes in forced organ harvesting from living people.

‘Quit the CCP’ Movement Good for the World

From 2017 to 2021, Brownback served as U.S. Ambassador at Large for International Religious Freedom, a key position at the State Department to defend religious freedom and human rights worldwide.

When asked which of his jobs was the most important, he once said: “I’ve been a congressman, a senator, a governor, but this is the most important job, because it’s about billions of people around the world. The United States is the main country to stand up and fight for their religious freedom.”

Brownback and his wife have 3 children of their own and 2 adopted children—one from China. He said, “I love the Chinese people and one of our children is adopted from China, a wonderful daughter in our family. They’re wonderful and talented people, but the government is holding them back and is really hurting them.”

The “Quit the CCP” movement is a grassroots movement for the Chinese people to sever their ties to the CCP and its affiliated organizations. It started organically in 2005 after The Epoch Times published the “Nine Commentaries on the Communist Party,” an editorial series that reveals the CCP’s history of killing and its lies. Through this movement, Chinese people renounce their membership in the CCP and its organizations, effectively removing the vow, which ties their fate to that of the CCP.

He believes that such a movement could bring a better future for the Chinese people.

“We would also see an explosion of growth in China. If you had a free open system to China, with the capacities of the Chinese people, they would have a huge upscale growth taking place,” said Brownback.

“I really think they’re currently being limited by their own governance.”