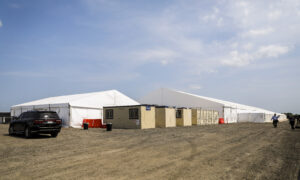 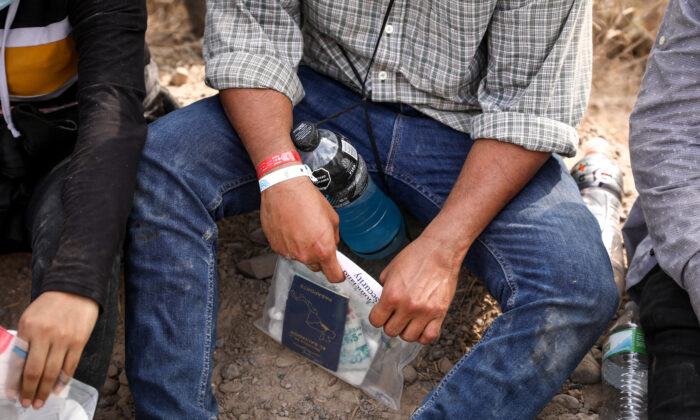 An illegal immigrant wears two wristbands that Mexican cartels have been using to control human smuggling into the United States, near Penitas, Texas, on March 15. 2021. (Charlotte Cuthbertson/The Epoch Times)
US News

Cartels Use Wristbands to Track Human Smuggling Over Border

McALLEN, Texas—Illegal border-crossers are coming into the United States wearing wristbands that relate to the smuggling organization or cartel that they paid to cross the river, according to new reports and confirmation by Border Patrol agents.

The wristbands have been spotted on illegal immigrants in the Rio Grande Valley in south Texas, as well as discarded on the ground beyond the river. Some illegal aliens were found wearing two different colored wristbands.

The system “basically outlines a process that the smugglers are using to know who paid, who didn’t, so that they can start moving them through—because they’ve got so many people backing up,” according to Jaeson Jones, a former captain in the Texas Department of Public Safety.

The wristbands have numbers, words, and logos on them. “We’ve seen turtles, we’ve seen devil heads and little snakes,” Jones told The Epoch Times. The Gulf Cartel (CDG) is using the word “metal” to signify a certain leader on the Mexico side, he said.

A cinder block wall directly across the Rio Grande from Roma, Texas, has “CDG” and “Metal” tagged on it. It’s in the Mexican city called Miguel Alemán, which is the frontline in a territorial battle between the CDG and the Cartel Del Noreste, a faction of the Los Zetas cartel.

The numbers on the wristbands relate to the “peso” or tax that the individual paid to the cartel to cross. Each also has a personalized identification number imprinted on it, Jones said.

“It’s the process that the cartels and the smugglers are using to treat people as a commodity. It’s really a sad situation,” Jones said. “It’s just the gift that keeps giving, and that’s why they fight so much over these people.”

On March 15, when asked if the president believes his administration has a handle on the southern border, White House press secretary Jen Psaki said, “We certainly do.”

The price to cross the Rio Grande has recently increased, according to Jones, who is in regular contact with border agents.

If an individual doesn’t have enough money to pay, the cartel will collect once the individual is inside the United States.

“They [cartels] set themselves up perfectly to put people into debt bondage,” Jones said.

The cartels collect an individual’s personal data, including name, phone, address, and any identification papers, as well as details and verification of their contacts in the United States.

“They have their family and country of origin to hold them accountable if they don’t pay. And that is debt bondage at its finest. That’s a form of human trafficking,” he said.

Jones said that although the United States focuses on stopping human trafficking and drug smuggling, the core of the issue is the cartels, which he recommends be designated as foreign terrorist organizations.

“We’re not focused on the people who are the core problem, which is the cartels. They own all the geographic space in Mexico,” he said. “And if we would change focus as a country and really go after the cartels who operate today as a parallel government in Mexico … that’s where we’re going to find success.”