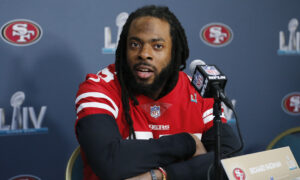 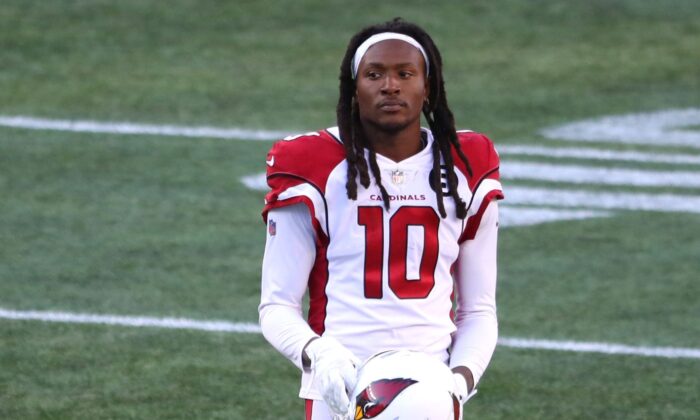 DeAndre Hopkins of the Arizona Cardinals looks on during the game against the New England Patriots at Gillette Stadium in Foxborough, Mass., on Nov. 29, 2020. (Maddie Meyer/Getty Images)
Vaccines & Safety

‘Can’t Do It’: Increasing Number of NFL Stars Speak Out Against COVID-19 Vaccine Policy

NFL star DeAndre Hopkins suggested in a now-deleted tweet that his playing career is in jeopardy after the league announced new COVID-19 policies.

“Never thought I would say this. But being put in a position to hurt my team because I don’t want to partake in the vaccine is making me question my future in the NFL,” Hopkins, a receiver for the Arizona Cardinals, wrote in the tweet.

It came after the NFL sent a memo to every team Thursday announced it would not extend the season for teams that have COVID-19 outbreaks among unvaccinated players. Teams that have such an outbreak would have to forfeit and take a loss, according to the memo.

The Epoch Times has contacted the NFL regarding its vaccination policy.

Minutes later, after deleting the tweet, Hopkins simply wrote: “Freedom?” Later, he wrote: “Btw I got about 9 more years in me, y’all have a good day.” And around the same time he posted the deleted tweet, he publicly questioned the effectiveness of COVID-19 vaccines: “My girlfriend brother in the military got the vaccine and had heart problems right after. When you stand for something they hate you!”

“The NFL is pressuring/ ‘influencing’ guys to get the vaccine,” Ramsey, who plays for the Los Angeles Rams, wrote on Twitter. “They are saying if there is an outbreak, the team will be penalized heavily. My point is no teammate of mine will feel that pressure from me because whether you are vaccinated or not, there is still a chance of getting covid. I thought my point was simple but I guess not.”

He clarified: “Just because my teammate(s) personally decide not to get the vaccine, I won’t think they are a bad teammate,” he added.

Leonard Fournette, the running back on the defending Super Bowl champion Tampa Bay Buccaneers, issued a now-deleted tweet, writing, “vaccine … I can’t do it.”

Buffalo Bills player Cole Beasley also took a public stance against getting vaccinated last month, writing on Twitter: “I’m not going to take meds for a leg that isn’t broken. I’d rather take my chances with Covid and build up my immunity that way.”

According to the recent NFL memo, “If a game is cancelled/postponed because a club cannot play due to a COVID spike among or resulting from its non-vaccinated players/staff, the burden of cancellation or delay will fall on the club experiencing the COVID infection. We will seek the minimize the burden on the opposing club or clubs.”