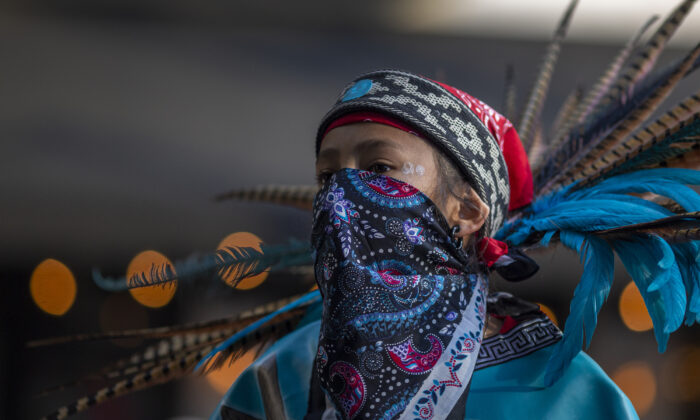 An Aztec dancer participates in a march in Los Angeles, California, on May 1, 2019. (David McNew/Getty Images)
Education & Family

The California Department of Education has proposed a new curriculum that would involve teachers leading students in chanting the names of Aztec gods in an effort to build unity in the classroom.

The latest draft of the proposed Ethnic Studies Model Curriculum, which will undergo a vote for approval next week, seeks to “center and place high values” of the traditions and experiences of pre-Columbian America, and to critique “white supremacy and racism” that led to their marginalization in the modern world.

This guiding narrative is reflected in the design of sample lessons and various class activities, including the model curriculum’s official “ethnic studies community chant,” in which students directly appeal to the deities of the Aztec pantheon for the power to become “warriors” of “love, ecological and social justice.”

In the community chant of “In Lak Ech,” which translates to “You Are My Other Me,” teachers are instructed to first lead the group of students in chanting and clapping to Tezcatlipoca, a cannibalistic wizard-god who, according to the Aztec tradition, brought the downfall to the Toltec civilization in favor of the human-sacrificing Aztecs.

The students then chant to other deities including Huitzilopochtli, the Aztec sun god, seeking “healing epistemologies” and a “revolutionary spirit.” Seeing themselves as people of the sun, the Aztecs believed that Huitzilopochtli needed daily nourishment of human blood and hearts, and brutally sacrificed hundreds of thousands of people in offering to him.

The chant ends with a request for “liberation, transformation, decolonization,” after which students shout “Panche beh! Panche beh!” which translates to “seeking the roots of the truth” or “think critically.”

The document includes a link to a video showing what a unity chant looks like in practice. The video was taken at Social Justice Humanitas Academy in the Los Angeles Unified School District, where many indigenous songs and chants like In Lak Ech were developed.

Christopher Rufo, the journalist who first reported about the chant to Aztec gods promoted by California’s new curriculum, wrote in his City Journal article that such practice almost certainly violates the First Amendment’s Establishment Clause that prohibits the state from showing a preference for one religion over others.

The curriculum, if approved, would serve as a guide to California’s K-12 education system of more than 6 million students. It was originally proposed in 2019 as a part of the state’s effort to teach students about the accomplishments of non-Christian people, groups, and ethnic minorities to address “issues of ethnicity, identity, service, and social justice.”