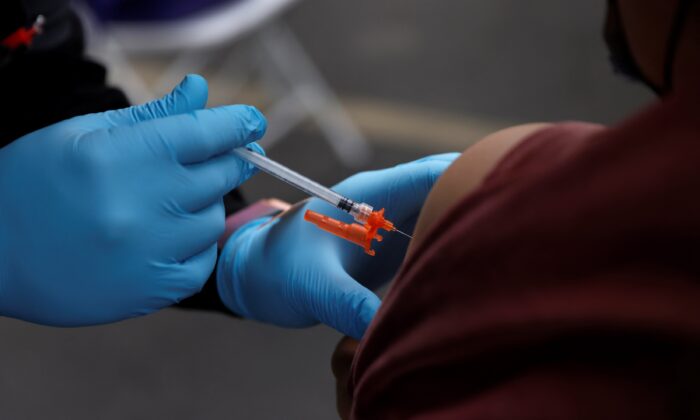 A Pfizer-BioNTech COVID-19 vaccine is administered to a person in Los Angeles, Calif., on Jan. 29, 2022. (Shannon Stapleton/Reuters)
US

Five months after filing a lawsuit against the Goleta Water District in Santa Barbara, attorneys have secured a six-figure award in favor of five plaintiffs resulting from the utility’s restrictive COVID-19 employee vaccine mandate.

“This was fairly early on that they offered this judgment that the plaintiffs were the prevailing parties, which means they did not want to litigate this case clearly and go to discovery,” said Mariah Gondeiro, an Advocates for Faith & Freedom lawyer. “I believe that we can use it in other cases as a precedent.”

Advocates for Faith & Freedom, a nonprofit law firm, filed their lawsuit in June alleging that the mandate discriminated against their clients who have religious beliefs that prevented them from submitting to the injection.

The settlement resulted not only in Goleta Water District paying $125,000 to five plaintiffs, plus attorney’s fees, but also in agreeing to a judgment in which the plaintiffs prevailed.

“It’s not really surprising because the reality is we’re starting to see this across the country,” Gondeiro told The Epoch Times. “Government officials are being held accountable for their discriminatory policies and I am hopeful that we’re going to continue to see these types of decisions because what they did was wrong, and they hurt a lot of people’s lives.”

Two of the employees remain water district workers. Three have moved on.

“They didn’t want to have to pay for testing and the ones that have already left don’t want their jobs back,” Gondeiro said.

Because they requested and were granted religious exemptions, the five plaintiffs had to choose between unpaid leaves of absence or paying for bi-weekly COVID-19 tests on their own time.

“Biweekly tests cost up to $800 a month, which for government employees really eats into your paycheck,” she said.

The unvaccinated workers were also restricted from entering certain buildings and were required to wear an N95 face mask while vaccinated employees were not held to the same standard.

“They had no compelling reason to treat plaintiffs differently than their vaccinated colleagues, especially considering several of them already contracted COVID-19,” Gondeiro argued.

Causes of action included violations of the constitutional free exercise of religion and the Fair Employment and Housing Act (FEHA). Each of the five plaintiffs will receive $25,000.

“The award is definitely way more than what they had to pay out of their pocket so it encompasses obviously the non-monetary aspect of damages,” Gondeiro added.