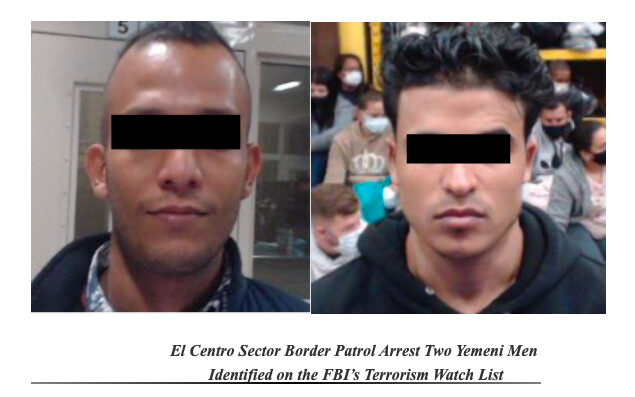 Within the past two months, Border Patrol agents have apprehended two Yemeni men who are on the FBI’s Terrorism Watch List and the No-Fly list, according to Customs and Border Protection (CBP).

Both men were arrested in separate incidents after crossing the border illegally just west of the Calexico Port of Entry in California.

Agents apprehended the first man, a 33-year-old, on Jan. 29. They also found a cellphone sim card hidden underneath the insole of his shoe, according to CBP.

The man was transferred to Immigration and Customs Enforcement.

“These apprehensions at our border illustrates [sic] the importance of our mission and how we can never stop being vigilant in our everyday mission to protect this great country,” Chief Patrol Agent Gregory K. Bovino wrote in a since-deleted April 5 statement.

In February, Border Patrol apprehended 11 Iranians who crossed illegally near Yuma, Arizona. Iran is considered a “special interest country” with ties to terrorism.

The Department of Homeland Security (DHS) said in January 2019 that an average of 10 known or suspected terrorists are prevented from entering the United States every day. Most are encountered at airports or even while still overseas as they apply for a visa.

An additional 3,000 “special-interest” aliens were apprehended at the southwest border in 2018, former DHS Secretary Kirstjen Nielsen said on Jan. 4, 2019.

Mexican cartels control the south side of the U.S. border, and they’re known to use large groups of families and children to tie up Border Patrol resources so they can send illicit goods and criminals through an unpatrolled area. Another tactic is to place criminals in with large groups so they can blend in.

In Europe, concerns mounted in 2015 and 2016, when terrorists started to infiltrate the massive refugee flows coming mostly from Syria.

“We should remember, most of the terrorists that infiltrated the European borders abused that asylum system—made up fake names and fake stories—and got in [during] the crisis,” said Todd Bensman, author of “America’s Covert Border War” and senior fellow at the Center for Immigration Studies, on Feb. 10.

Bensman said the threat in the United States “may very well be elevated and escalating.”

The press release about the Yemenis has since been removed from the CBP website. A CBP spokesperson told The Epoch Times via email that it wasn’t “properly reviewed and contained certain disclosure and policy information related to national security,” but didn’t go into detail.