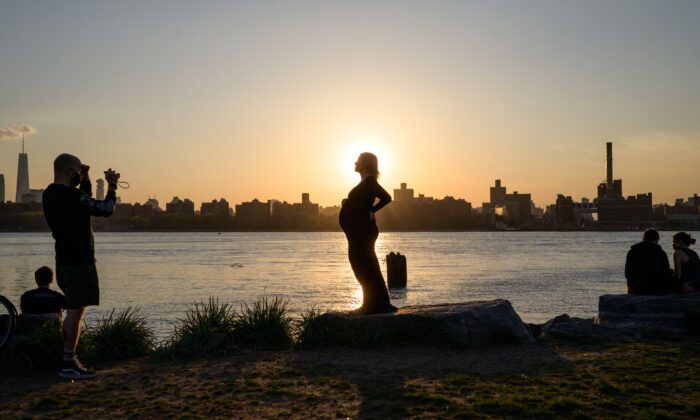 A pregnant woman poses for photos before the Manhattan city skyline at sunset in a park in Williamsburg, N.Y., on April 20, 2021. (Ed Jones/AFP via Getty Images)
Viewpoints

‘Bodies With Vaginas’ and the Woke Dehumanization of Women

In the “Dune” series of science fiction novels, biotechnologists manufacture clones in breeding contraptions known as “axlotl tanks.” Readers eventually learn that these “tanks” are the uteruses of unconscious lobotomized women—motherhood reduced to the status of gestating vats with the female victims of this despotism dehumanized by a lexicon that eradicates their humanity.

Thankfully, in the here and now, we understand that deploying such crass terms to describe women undermines their equal moral worth. Or at least I thought we did. But then, society’s intellectual and cultural leaders went “woke.” Suddenly, after decades of progress—indeed, when it’s now deemed misogynistic to use once common descriptors such as “chicks” or “broads”—women are being reduced to crass identifiers generally related to their female body parts or biological functions.

The most recent example appeared in the pages of the world’s oldest medical journal, The Lancet. In an article reviewing a museum exhibit, “A Brief History of Periods,” the writer referred to biological females as “bodies with vaginas.”

“Bodies with vaginas?” How misogynistic can you get? Imagine if Donald Trump had described women in such a sexist and demeaning way. The decibel level of media screaming would shatter eardrums!

Instead, we hear the sound of silence, or worse, applause. What’s going on? Blame the transgender moral panic. According to woke thinking, since a small percentage of girls and women identify subjectively as male and some boys and men as female, in the name of equity and inclusion, our lexicon must recognize not all women have female genitalia—and that some men do.

And in that redefining, we can’t just call women, “women.” That’s hateful! That isn’t inclusive! That’s transphobic! So, a common identifier must be found to describe those born biologically female without referencing their born sex, hence the definition of individuals by their gynecological parts.

Here’s another example. When JAMA Pediatrics advocated for allowing mastectomies for adolescent girls diagnosed with gender dysphoria, the article referred to girls’ anxiety at developing breasts as “chest dysphoria” and mastectomies as “chest surgery.” The idea is to validate the patient’s aversion to female secondary sex characteristics, but that description robs the condition and procedure of their essential meaning.

It isn’t just the medical journals. A few years ago, a piece in The Atlantic referred to nursing an infant as “chestfeeding”—instead of breastfeeding. The story involved a transgender man who had given birth and was able to nurse even though a mastectomy had been performed, removing outward breast tissue.

The Biden administration has engaged in the same vocabulary reductionism. Recently, its budget proposal—of all places—referred to mothers as “birthing people.” Similarly, as Maggie Hroncich noted recently in a column in The Federalist, Democratic congresswomen have referred to African American mothers as “black birthing people,” all justified by the supposedly feminist NARAL.

“When talking about birthing people, we’re being inclusive,” the organization wrote on Twitter. “We use gender-neutral language when talking about pregnancy, because it’s not just cis-gender women that can get pregnant and give birth. Reproductive freedom is for *every* body.”

But Hroncich had the better argument.

“The left’s terminology is not just about eradicating certain words but eventually eradicating the uniqueness of a mother’s experience,” she wrote.

And how’s this for stripping women of their personal essence? An article in the Journal of Medical Ethics coined a new gender identifier based on chromosomes. In an article advocating that biological males have a fundamental human right to receive uterus transplants, the author describes born females who so identify as “XX women” and biological males who identify as women as “XY women,” We shouldn’t complain, I guess. At least the author used the word, “women.”

The worst example of this dehumanizing word deconstruction was produced by the gay rights advocacy group, the Human Rights Campaign, in its booklet, “Safer Sex for Trans Bodies” (pdf). First, the booklet erases “vagina” as the proper word for a biological woman’s sex organ and replaces it with “front hole.” Not only is that crude and misogynistic, but juvenile. It reminds me of a term a toddler might employ.

Next, the guide engages even greater surrealism by claiming that real vaginas are those surgically crafted during transition surgery from male to female: “VAGINA: We use this word to talk about the genitals of trans women who have had bottom surgery.” Good grief, so a biological woman doesn’t have a vagina, but a biological man who identifies as female and has been surgically altered to reflect that belief does. The mind absolutely boggles.

The crassification (if you will) of feminine descriptors isn’t limited to the purveyors of transgender ideology. The fertility industry now deploys verbiage that’s eerily reminiscent of the fictional axlotl tank.

With in-vitro fertilization, it’s quite common for women to bear babies who aren’t their biological offspring. They used to be called “birth mothers.” Whatever one thinks of that practice, the term at least recognized the essential nature of the woman’s relationship with the baby she bore. Later, such women came to be called “surrogate mothers,” which is less personal, because it takes out the “birth” part, but still recognizes the essential fact of the surrogate’s motherhood.

Now, fertility industry parlance refers to these women by the impersonal term, “gestational carrier,” a dehumanizing trope that strips the woman who is giving birth both of her humanity and her motherhood. As with the axlotl tank, she’s merely the sum of her gestational functions. Ugh.

Why does any of this matter? The words we use to describe ourselves and our interpersonal relationships profoundly influence how we think. By neutering the language—and even reducing female identities to mere body parts or functions—we deny our mothers, daughters, wives, and sisters the essential feminine aspect of their personhood. That not only objectifies women and girls, but sets us on the road to social anarchy.

This isn’t to say that we should ever denigrate people who are transgendered or treat them in a demeaning way. All of us deserve equal respect as human beings. But it is to say that we shouldn’t yield the language to irrational cultural hegemons who wield their deconstructing lexicon as a cultural cudgel to remake society in their ill-conceived woke image.