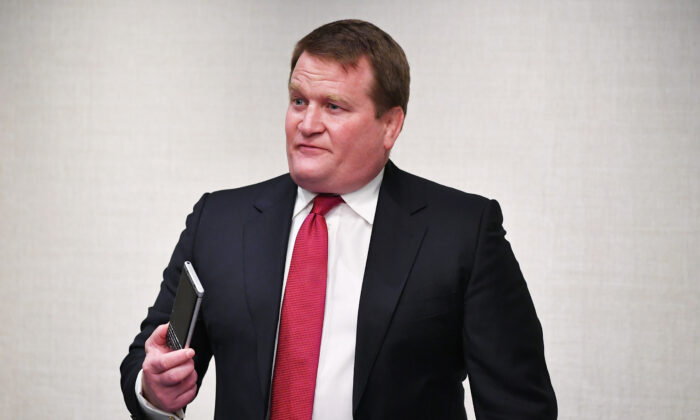 Tony Bobulinski, who claims to have been an associate of Hunter Biden, speaks to reporters at a hotel in Nashville, Tennessee, ahead of the final presidential debate on Oct. 22, 2020. (Mandel Ngan/AFP via Getty Images)
Trump Administration

Tony Bobulinski, a former business associate of Hunter Biden, said he came forward on the record to speak about the Bidens’ alleged overseas business dealings because of a claim made by House Intelligence Committee Chairman Adam Schiff (D-Calif.) earlier this month.

“When I saw Adam Schiff go on record, talking about Russian disinformation, after this email had been posted online by the New York Post … I was at the end of my rope,” Bobulinski said on Fox News’ “Tucker Carlson Tonight.” He was referring to an initial report from the NY Post that included an email from a Ukrainian gas company executive to Hunter Biden, saying he wanted to arrange a meeting with Joe Biden.

Schiff told CNN days later, without evidence, that the report was a “smear from the Kremlin,” while Joe Biden and other Democrats later echoed the disinformation claim.

“And so, I called [former business partner] Rob Walker and I told him that if that statement isn’t retracted by Congressman Schiff by midnight on Sunday, that I was going on record, and I was disclosing all the facts to the American government, to the American citizens, and the world. I was hoping the Bidens would do the right thing, or Schiff would retract his statement,” Bobulinski said.

“Ah, Tony, you’re just going to bury all of us, man,” Walker responded, according to an audio recording.

Bobulinski said the emails disclosed in the NY Post’s report were authentic, claiming that he received an email in May 2017 about a business plan with the Bidens’ Oneida Holdings firm.

“To have a congressman out there, speaking about Russian disinformation … to say that and associate that with my name, is absolutely disgusting to me,” Bobulinski added.

Schiff’s office didn’t immediately respond to a request by The Epoch Times for comment.

The “H” in emails with a Chinese Communist Party (CCP)-linked Chinese energy firm CEFC were referring to Hunter Biden, said Bobulinski, while Joe Biden was “the big guy.” President Donald Trump made reference to the “big guy” claim in the Oct. 22 presidential debate.

“A single phone call from Joe Biden” could have gotten Schiff to take back the claim, Bobulinski said.

Biden’s campaign and Joe Biden have repeatedly denied knowing anything about Hunter Biden’s business dealings, while the campaign told news outlets that the elder Biden never met with the Ukrainian gas executive in Washington.

Also in the interview, Bobulinski, a Navy veteran, said the Bidens are “compromised” by the CCP.

Joe Biden’s name doesn’t appear in any of the corporate records that were disclosed by Bobulinski, although the Biden family name was nonetheless one of the key offerings to CEFC China Energy co-founder Ye Jianming from Hunter Biden and his partners. Bobulinski also described having meetings with Joe Biden, Hunter Biden, and Joe’s brother Robert about business dealings.

At one time, Joe Biden allegedly told him, “Keep an eye on my son and brother and look out for my family,” according to Bobulinski.

During the Oct. 22 presidential debate, Joe Biden said there was nothing unethical in his son’s business dealings in Ukraine.

“Nothing was unethical … With regard to Ukraine, we had this whole question about whether or not, because he was on the board, I later learned, of Burisma, a company, that somehow I had done something wrong,” Biden said. “Yet every single solitary person when he was going through his impeachment, testifying under oath, who worked for him, said I did my job impeccably. I carried out U.S. policy. Not one single solitary thing was out of line, not a single thing.”