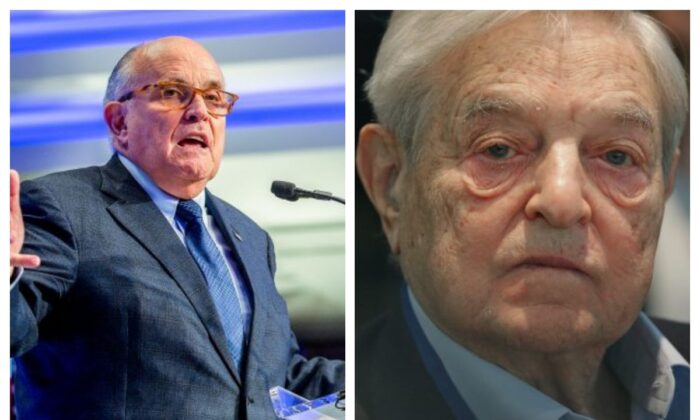 “I have been involved in efforts to reform the criminal-justice system for the more than 30 years I have been a philanthropist … Yet our system is rife with injustices that make us all less safe,” Soros wrote for the Wall Street Journal on July 31.

The controversial billionaire added that “in recent years, reform-minded prosecutors and other law-enforcement officials around the country have been coalescing around an agenda that promises to be more effective and just.”

“This agenda includes prioritizing the resources of the criminal justice system to protect people against violent crime. It urges that we treat drug addiction as a disease, not a crime. And it seeks to end the criminalization of poverty and mental illness,” he argued.

But Giuliani, a former federal prosecutor who later built his reputation as a mayor who was tough on crime, said that Soros is a primary reason for the recent U.S.-wide spike in homicides and violent crimes. A Centers for Disease Control and Prevention report in May, for example, revealed that the homicide rate via firearms spiked in 2020 to levels not seen in 25 years, saying the rate shot up 35 percent to about 6.1 per 100,000 people.

“If there is one single person responsible for the record increases in murder and violence in America’s cities it’s George Soros,” Giuliani wrote in a Monday Twitter post. “Major contributor to [Black Lives Matter], Antifa, Democrat Party, Biden, Harris and 40 or so pro Criminal DAs. The blood is on his hands,” he said.

Meanwhile, Gascon is himself the subject of a recall election in November. More than 715,000 signatures have been collected to recall him, which is far more than the 566,000 to trigger the initiative.

Prosecutors backed by Soros oversee jurisdictions in which 20 percent of Americans live, and more than 40 percent of U.S. homicides in 2021 occurred in those places, according to the pro-police Law Enforcement Legal Defense Fund.

“Most of these prosecutors pursue radical justice policies upon assuming office including eliminating bail, dismissing felony cases, and seeking lenient sentences while creating antagonistic relationships with their public safety partners, especially the police,” the group wrote in June.