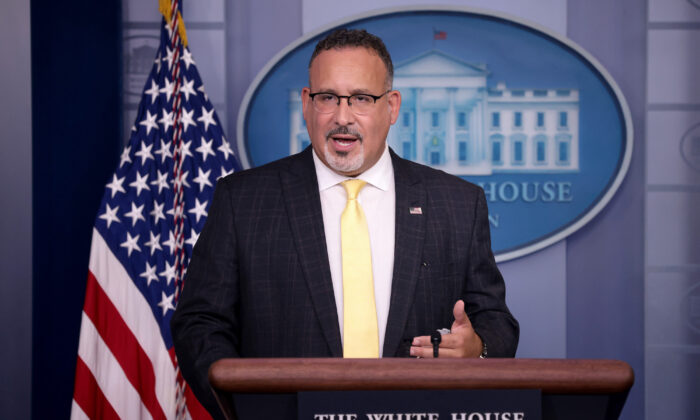 Secretary of Education Miguel Cardona answers questions during the daily briefing at the White House on Aug. 5, 2021. (Win McNamee/Getty Images)
US News

Newly surfaced emails suggest that the U.S. Department of Education might have played a more important role than previously thought in the creation of a highly controversial letter, which likened concerned parents to domestic terrorists.

In a letter (pdf) sent to President Joe Biden on Sept. 29, 2021, the National School Boards Association (NSBA) characterized disruptions at school board meetings as “a form of domestic terrorism and hate crime.” The organization also urged the federal government to invoke counterterrorism laws to quell “angry mobs” of parents seeking to hold school officials accountable for teaching Marxist critical race theory and for imposing COVID-19 restrictions such as mask mandates on their children.

Just five days later, on Oct. 5, U.S. Attorney General Merrick Garland issued a memo directing federal law enforcement to help address an alleged “disturbing spike in harassment, intimidation, and threats of violence” against teachers and school leaders. The memo remains in effect, despite the NSBA having since apologized for and rescinded the letter.

According to email exchanges obtained by advocacy group Parents Defending Education (PDE), the NSBA letter appears to be a response to a request for information by U.S. Secretary of Education Miguel Cardona.

On Oct. 5, NSBA board member Marnie Maldonado sent an email (pdf) to fellow board member Kristi Swett, asking her whether the NSBA had gone through all the correct procedures before sending the letter to Biden.

“I am very concerned about the process by which the statement was made and the tone that essentially allowed the White House to direct the Attorney General to consider members of our community ‘domestic terrorists,'” Maldonado wrote, adding that she wanted the NSBA “to focus on civility.”

In response, Swett said she agreed that there were “communication issues” within the NSBA. She also mentioned that Chip Slaven, then-interim director of the NSBA, “told officers he was writing a letter to provide information to the White House, from a request by Secretary Cordona [sic].”

In an interview with Fox News, PDE President Nicole Neily indicated that the letter Cardona allegedly requested and the “domestic terrorism” letter are the same thing.

“Should this allegation be true, it would reveal that this administration’s pretextual war on parents came from the highest levels,” Neily told Fox News.

“Attorney General Merrick Garland unequivocally stated that he based his memo on the NSBA’s letter—which in turn mobilized the FBI and U.S. attorneys,” she said. “If Secretary Cardona was truly involved in this ugly episode, it is a significant breach of public trust, and he should be held accountable.”

The new information comes amid questions over the Biden administration’s involvement in the creation of the NSBA letter, which still serves as the basis of a series of actions taken by the Justice Department.

According to internal files leaked to Rep. Jim Jordan (R-Ohio), the top Republican on the House Judiciary Committee, the FBI’s Criminal Investigative Division has created a new “threat tag” titled “EDUOFFICIALS,” and directed agents to apply the tag to all “investigations and assessments of threats” relating to school boards.

“This disclosure provides specific evidence that federal law enforcement operationalized counterterrorism tools at the behest of a left-wing special interest group against concerned parents,” Jordan said in a letter to Garland. “The FBI’s actions were an entirely foreseeable—and perhaps intended—result of your October 4 memorandum.”