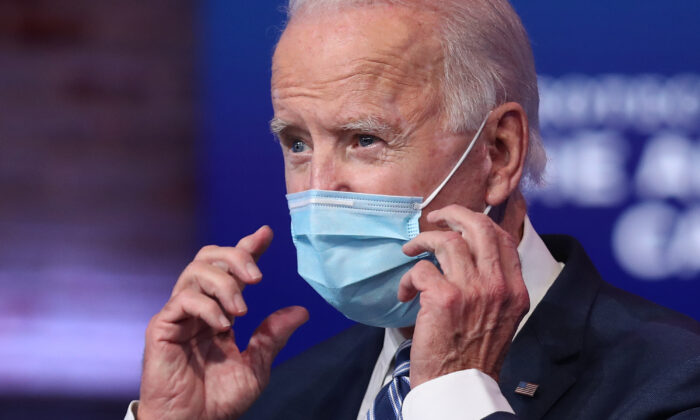 Joe Biden removes his mask to address the media about the Trump Administration’s lawsuit to overturn the Affordable Care Act at the Queen Theater in Wilmington, Del., on Nov. 10, 2020. (Joe Raedle/Getty Images)
Viewpoints

Biden Threatens to Unleash the Tribe of the Mask

“I will be asking the American people to wear a mask for the first 100 days of my administration,” he said shortly before the new year. “Not as a political statement, but as a patriotic duty.”

Biden made mask-wearing a pillar of his presidential campaign; he knows that in the current context, it’s fundamentally about politics. So why risk further dividing the electorate, many of whom believe his victory is owing to massive election fraud, by asking them to signal they’ve forgotten their disenfranchisement and jumped to his side by conforming to his political messaging? Didn’t his advisers realize that he might be setting himself up for early public failure when much of the country ignores his call?

Sure they did and that’s the point: Biden was issuing a threat.

Evidence that masks stop the transmission of COVID-19 is inconclusive. Members of Biden’s own party—such as California Gov. Gavin Newsom and House Speaker Nancy Pelosi—aren’t convinced by the evidence or they wouldn’t have gone out in public without masks. Evidence that evidence isn’t the most relevant factor in the mask debate is the number of people who wear them when there is no chance of infection, like when driving alone in a car, or walking a dog on an empty street.

They aren’t following the science, rather, they are signaling they’re with the tribe of the mask.

For them, wearing a mask is a cultural identity marker signaling allegiance to an ascendant style of left-wing U.S. politics that joins previously professed articles of faith, such as demands for “environmental justice,” “social justice,” or “re-imagining policing.” The discipline of obscurantist movements is strongest when their ideological convictions are most abstract. Were they rooted in a rational belief system, in history or science, it would be harder for the leadership to control and then channel the movement’s energies as needed.

That’s why the priorities of the left are constantly shifting and updating—discipline is kept by testing the cadres’ loyalty, not to the movement’s ideology but to the movement itself.

America’s increasingly powerful oligarchy, its corporate and political elite, wants the movement to see that its goals intersect. To undermine the old order, the oligarchy’s media courtiers have associated the institutions of participatory democracy with social ills. For instance: The Senate filibuster is racist. The Electoral College is racist. Questioning the integrity of the vote in urban areas is racist. Accordingly, anyone defending the republic against the counter-revolution is racist, and thereby identified with Donald Trump supporters, who have been cast as racists since 2015.

It’s unlikely that Trump voters will be much bothered that a man whose family reportedly received a $5 million loan from a Chinese Communist Party official thinks they are unpatriotic for not covering their faces under his orders. They were already told that a red MAGA baseball cap is like a Klansman’s hood. Consequently, it was OK to disrupt pro-Trump events, chase supporters in the street, and beat them because violence is permitted against anyone wearing a symbol of hate.

But hate and racism were just among the catchphrases used to scramble mobs of misfits and criminals and give the media talking points to fortify their echo chamber rationalizing violence against those they’d been directed to target. At the top of the food chain, the issue was only ever about power. MAGA hats were signs of Trump’s support and the pride his supporters took in voting for a candidate who promised to defend the old order. The number of people wearing them was a public index of his growing political strength, which, in turn, attracted the previously timid to Trump’s camp. So the support had to be driven down, by threatening Trump supporters.

It perhaps shouldn’t be surprising that the concept of the “shy” or “silent” Trump voter who didn’t disclose his preferences to pollsters was so easily mainstreamed into political discourse. Polling professionals, reporters, and media experts casually discussed the new phenomenon as if it were natural that large segments of the U.S. public feared retaliation—physical violence, harassment, loss of employment and income, and so on—for supporting the presidential candidate of one of our two major parties. But it isn’t normal, not in American politics, not before 2016 anyway.

Coercion is a third-world political category.

And now, Biden advisers are planning to double down. They know that up to half of the country believes his victory is owing to third-world tactics—state-media censorship of the opposition, compromised judges, corrupt federal law enforcement, and ballot stuffing. Putting masks on Trump supporters, in spite of their own judgment about when it may be advisable to wear one, is a way to affirm Biden’s legitimacy—the people who once signaled their support for Trump by wearing MAGA hats now show they’re behind Biden by wearing masks, just as he asked.

And if they don’t, then the tribe of the mask will have what every mass movement galvanized by violence requires—a scapegoat. If after his first 100 days Biden isn’t capable of defeating COVID-19 as he promised, the issue isn’t that, as history and science show, viruses can’t be defeated.

No, the problem is that Trump supporters didn’t wear masks. They’re to blame. And so Biden is laying out the choice before the country—make me legitimate or the mob will hunt you.