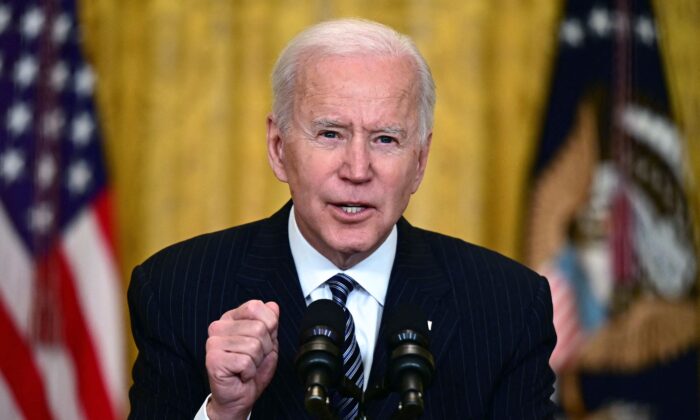 President Joe Biden speaks on the national vaccination efforts in the East Room of the White House in Washington, D.C., on March 18, 2021. (Jim Watson/AFP via Getty Images)
Executive Branch

President Joe Biden on Wednesday said the current surge of illegal immigrants at the U.S.-Mexico border started under the Trump administration.

“This new surge we are dealing with now started with the last administration, but it’s our responsibility to deal with it humanely,” Biden said as he met with Vice President Kamala Harris, chief of staff Ron Klain, and other advisers in the White House. He did not elaborate.

“There was a serious spike in people heading to the southern border even in the midst of that [the Trump administration]. That was because there were serious natural disasters” in Latin America and the Caribbean, Biden said.

Other senior administration officials, including Department of Homeland Security (DHS) Secretary Alejandro Mayorkas, have blamed the previous administration’s policies for the surge and the conditions along the border.

Republicans are sure to disagree with Biden’s assertion on Wednesday, as a number of GOP members of Congress in recent days have blamed Biden for the surge in illegal immigrants. They have pointed to Biden having rescinded a number of Trump-era policies such as the “Remain in Mexico” order and construction of the southern border wall. Meanwhile, rhetoric from Biden and other Democrats about creating a pathway for 11 million illegal aliens is triggering the spike in people trying to cross the border, Republicans have said.

And some Democrats in districts along the border have sounded the alarm about numerous Border Patrol encounters with unaccompanied children in their districts.

“The administration is doing the right thing because the law requires that we process unaccompanied minors,” Rep. Filemon Vela (D-Texas) said in a statement Wednesday. “However, we are in the middle of a pandemic and our systems are being overwhelmed.”

Rep. Henry Cuellar (D-Texas), whose district also lies along the border, called on the White House to release unaccompanied minors—children who unlawfully enter the country without an adult—from Border Patrol custody into the custody of the Department of Health and Human Services (HHS).

“Any president should come down [and] really spend time with border communities. You know, the president sent a delegation and a bunch of folks from the White House,” Cuellar told Fox News last week, urging Biden to visit the border. “They didn’t talk to anybody, not even members of Congress down here.”