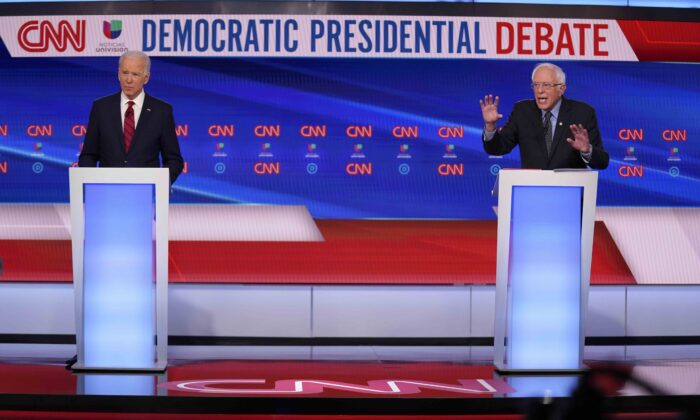 The leading Democratic candidates faced off Sunday night in Washington in the 11th debate of the primary season. The event was moved from Arizona, which votes Tuesday, because of concerns over the growing coronavirus pandemic, and was held without an audience.

Biden and Sanders Cast Themselves as Best Leader

Former Vice President Joe Biden and Sen. Bernie Sanders sought in Sunday’s debate to cast themselves as best-positioned to lead the nation through a global pandemic, with Biden pledging to deploy the military to help with recovery efforts and Sanders using the crisis to pitch his long-sought overhaul of the country’s health care system.

“One of the reasons that we are unprepared, and have been unprepared, is we don’t have a system. We’ve got thousands of private insurance plans,” said Sanders, who backs a sweeping government-run health insurance program. “That is not a system that is prepared to provide health care to all people in a good year, without the epidemic.”

Biden, who is leading Sanders in the race for the Democratic nomination, argued that a pandemic was not a moment to attempt to push through an overhaul of the American health insurance system, a politically arduous endeavor.

“This is a crisis,” Biden said. “We’re at war with a virus. It has nothing to do with copays or anything.”

Biden and Sanders both called for increased testing for the virus and economic relief for Americans who will suffer.

“This is bigger than any one of us. This calls for a national rallying for one another,” the former vice president said.

Sanders panned President Donald Trump’s uneven handling of the crisis, urging the president to stop hindering medical professionals by “blabbering with unfactual information that is confusing the American public.”

The first clash of the head-to-head debate between Joe Biden and Bernie Sanders is coming in the form of a dust-up over whether Sanders’ signature health care plan is the best way to respond to the coronavirus.

After Sanders said the Trump administration’s response to the outbreak laid bare the weaknesses of the nation’s current health care system, Biden pointed out that Italy—where the virus has essentially quarantined the country, has a government-run health care system that hasn’t alleviated the problem.

“With all due respect to ‘Medicare for All,’ you have a single-payer system in Italy,” Biden said. “It doesn’t work there.”

Sanders responded by noting that experts say “one of the reasons that we are unprepared … is that we don’t have a system.”

Sanders argues his single-payer health care system would provide free treatment for those diagnosed with COVID-19. Biden says he would authorize government funds to cover treatment.

Former Vice President Joe Biden is committing to naming a woman as his running mate if he’s the Democratic presidential nominee.

Biden made that assertion during Sunday night’s debate with Vermont Sen. Bernie Sanders in Washington. Asked the same question, Sanders didn’t definitively commit but said, “In all likelihood, I will.” Biden has previously said he would seriously consider naming a woman or a person of color as his running mate.

Bernie Sanders is accusing Joe Biden of not going far enough on his plans to combat climate change.

To Biden, the Vermont senator said during Sunday night’s Democratic debate in Washington, “I know your heart is in the right place” on climate change. But, calling the Paris Climate Accord—which Biden said he would rejoin—“useful,” Biden said that “bold action” was required for the good of the globe.

Biden asserted that his plans are ambitious, noting plans to end offshore drilling, as well as subsidies for the fossil fuel industry, but a need for global action to accomplish real change.

“We could get everything exactly right,” Biden said, of the need for international cooperation. “We’re 15 percent of the problem.”

Bernie Sanders is continuing to defend recent comments he made highlighting a literacy program in Cuba under the late dictator Fidel Castro.

He says during the Democratic presidential debate that while he condemns authoritarianism in Cuba, China and elsewhere, it’s acceptable to acknowledge what he said were positive changes made by such governments. As an example, he claimed the Chinese regime has made progress in reducing extreme poverty during the last 50 years.

His comments about Cuba may be a particular vulnerability ahead of Tuesday’s primary in Florida, which has a large Cuban population.

Competitor Joe Biden slammed him for the remarks and defended similar comments former President Barack Obama has made about Cuba under Castro’s leadership.

Sanders said it’s a “problem with politics” that politicians can’t acknowledge progress if it happens in these country.

China Wants to Solve Poverty, but Its Own Officials Are Undermining the Efforts
China’s Poverty Lie | China Uncensored

Biden and Sanders Close Out Debate

Sanders said in Tuesday’s debate that he’s fully committed to helping Biden win if the former vice president is the Democratic nominee. Sanders acknowledged Biden has won more states but says to defeat Trump “you have to bring young people, who are not great voters.” He says his young supporters bring energy and excitement.

Biden says he’s the candidate who is exciting voters, noting a big surge in voter turnout in some of the states he won. He says he pulled off big victories on Super Tuesday even though he had very little campaign money.

“Lets get this straight—energy has been for me,” Biden said. Biden says he’s “winning overwhelmingly among Democratic constituencies across the board.”