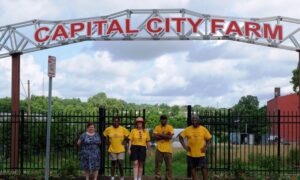 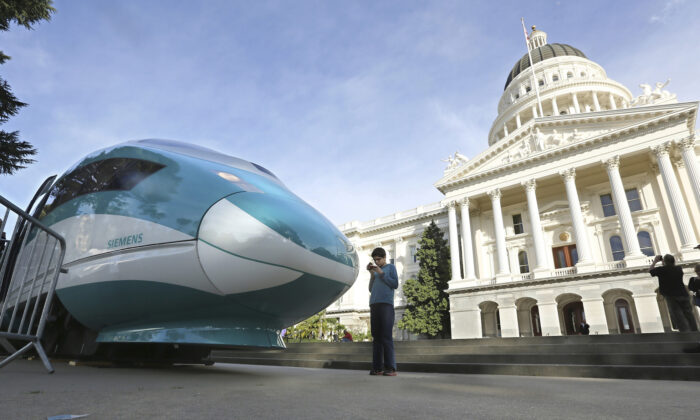 A full-scale mock-up of a high-speed train is displayed at the Capitol in Sacramento, Calif., on Feb. 26, 2015. (AP Photo/Rich Pedroncelli, File)
US News

California Gov. Gavin Newsom announced on June 10 that the Biden administration and the State of California have reached a deal to restore a bullet train grant of nearly $1 billion that was revoked by then-President Donald Trump, who called the project a “disaster.”

The U.S. Department of Transportation and California officials finalized settlement negotiations to restore the money for the train, which the Trump administration revoked in 2019, Newsom said in a statement.

“Restoring nearly $929 million in grant funding back to California’s High-Speed Rail project will continue to spur job creation, advance the project, and move the state one step closer to getting trains running in California as soon as possible,” Newsom said.

California voters approved nearly $10 billion in bond money in 2008 to build a high-speed rail line connecting Los Angeles and San Francisco that was supposed to be running by 2020. But the project was plagued by cost overruns and delays. Officials now hope to have trains running on a segment through the state’s central valley agricultural region by 2029.

Critics have derided the segment as a “train to nowhere,” while advocates claim it’s a necessary precursor to linking more populated areas.

Republican candidate for California governor Caitlyn Jenner said on June 10 she would take the $929 million grant and spend it on finishing Trump’s border wall.

“Right now, we’re spending billions on a high-speed train to nowhere,” she told KABC in an interview. “Take some of that money, go down to the border wall and completely finish on state land. Completely finish the wall. We need protection.”

Her remarks came as U.S. Customs and Border Protection reported that it had apprehended 180,034 individuals illegally entering the United States in May, the highest monthly tally in 21 years, fueling calls to tighten border security.

The project’s business plan anticipates environmental approval for the 500 miles between Los Angeles and San Francisco by 2023. Completion of the full line depends on funding and other unknowns. Newsom unveiled a budget proposal last month that includes $4.2 billion for the project, including the bond money approved by voters in 2008.

In February 2019, Newsom announced a scaled-back version of the $77 billion high-speed rail project, stating the current plan “would cost too much and take too long,” prompting Trump to demand that California return the $3.5 billion it had received from the federal government for the project.

“California has been forced to cancel the massive bullet train project after having spent and wasted many billions of dollars,” Trump wrote in a tweet. “They owe the Federal Government three and a half billion dollars. We want that money back now. Whole project is a ‘green’ disaster!”

Later, the Trump administration pulled the $929 million in outstanding federal grant money from the beleaguered train project. In a letter (pdf), the U.S. Department of Transportation explained its decision, stating California officials had “failed to make reasonable progress” and hadn’t held up their part of the funding agreement.