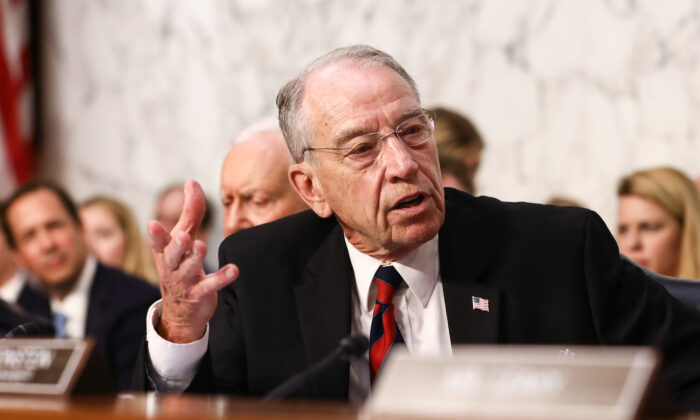 “Last night, former Vice President Biden said that President Trump ‘hasn’t lowered drug costs for anybody.’ This is false,” he said during a Senate floor speech on Wednesday. “And I hope the news media call out Mr. Biden for this lie.”

Grassley, who is one of the leading figures in the Senate’s efforts to lower the drug prices, said Trump has taken several actions to reduce prices.

“Trump launched an initiative to lower the out-of-pocket costs of insulin for seniors through the Medicare Part D program,” he said. “[He] also recently signed an executive order that will launch several programs to lower drug costs and help seniors afford their medicines.”

During the first presidential debate on Tuesday night, Trump listed the efforts of his administration in reducing drug prices, including cutting the price of insulin, allowing governors to buy drugs from other countries, and going after big pharma companies.

He criticized Biden, who has a 47-year career in politics and was the former vice president during the Obama administration for eight years, for not reducing the drug prices during his time in Washington.

“You could have done it during your 47-year period in government, but you didn’t do it,” the president said.

“He has executive orders that have no power,” the Democratic nominee claimed. “He hasn’t lowered drug costs for anybody.”

Trump and Biden squared off in a contentious debate on a range of issues, including the COVID-19 pandemic, riots, unemployment, the Supreme Court, and mail-in ballots.

During the debate, both candidates sharply attacked one another, with Trump attempting to tie Biden to the “radical left” wing of his party and frequently noting that the former vice president is an unsuccessful career politician.

Meanwhile, Biden attacked Trump’s handling of the CCP virus pandemic and said Trump should “get out of your bunker and get out of the sand trap and go your golf course to the Oval Office” to come up with a bipartisan plan to save people.

Biden also claimed Trump added fuel to the tense racial relation the nation is facing while Trump insisted on law and order critical for the country.