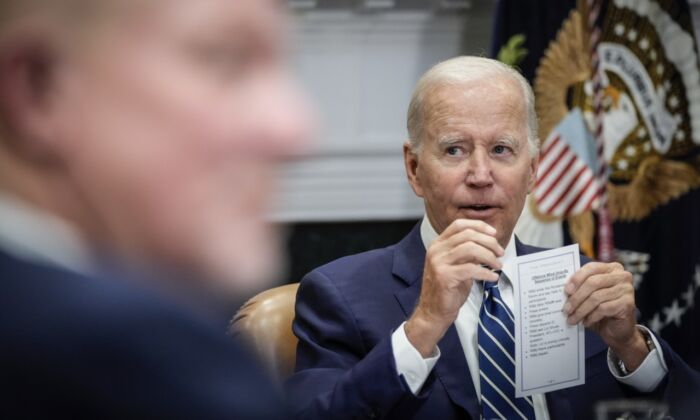 President Joe Biden speaks during a meeting about the Federal-State Offshore Wind Implementation Partnership in the Roosevelt Room of the White House in Washington on June 23, 2022. (Drew Angerer/Getty Images)
Executive Branch

A cheat sheet giving U.S. President Joe Biden specific instructions on how to behave was captured on camera during a June 23 conference.

The 79-year-old president unintentionally held up the pre-written staff notes, titled “Offshore Wind Drop-By Sequence of Events” at a White House meeting with wind-industry executives. The snapped sheet contains a list of bullet points, which begin by telling Biden to “enter the Roosevelt Room and say hello to participants.”

Next, the instruction reads “YOU take YOUR seat.”

The president should also give two-minute comments after reporters arrive, as the paper instructs, and ask AFL-CIO President Liz Shuler, joining virtually, one question after the press departs. Ignoring the guidance, Biden spoke for over seven minutes at the event.

The notes end with “YOU thank participants” and “YOU depart.”

This is not the first time the 46th president inadvertently flashed his note card to reporters and photographers. Last July, Biden was seen alerted by an aide to remove a speck from his chin via a handwritten message during a live-streamed event at the White House.

The president was spotted in March carrying a cheat sheet containing possible tough questions with potential responses on Vladimir Putin, after he previously stated in Poland that the Russian leader “cannot remain in power,” causing confusion as to whether the United States was seeking to topple the Russian regime. He also confused Iran with Ukraine in his first State of the Union speech amid the Russian invasion.

A host of Biden’s so-called gaffes since he took office have also drawn fire from Republicans and raised further suspicions over his mental well-being. Almost 40 Republican lawmakers requested in a February letter that the president take a cognitive test, which is beyond “a partisan issue,” following the example set by former President Donald Trump.

White House press secretary Karine Jean-Pierre, however, laughed off a question in an interview with CNN earlier this month, when asked about Biden’s physical and mental capabilities.

“You’re asking me this question? Oh my gosh,” Jean-Pierre said in response. “He’s the president of the United States. … That is not a question that we should be even asking.”

Last November, after Biden underwent a physical examination and colonoscopy, his doctor Kevin O’Connor said the president “remains fit for duty. ” He did not specify whether Biden took a cognitive exam.