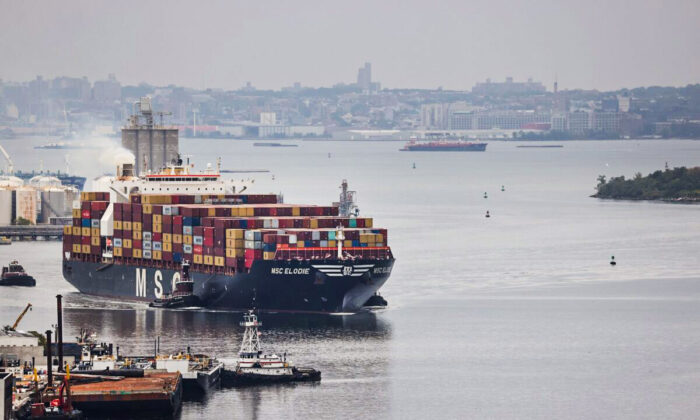 A cargo ship moves toward the Bayonne Bridge as it heads into port in Bayonne, New Jersey, on Oct. 13, 2021. (Spencer Platt/Getty Images)
US News

The White House has walked back on President Joe Biden’s latest remark about supply chain challenges, saying that the Biden administration is not planning to mobilize the National Guard to help unload container ships or drive trucks to deliver goods.

During an Oct. 21 town hall meeting hosted by CNN, Biden was asked whether the federal government would send the National Guard to help ease the supply chain backlog. He replied that he was “absolutely” willing to take that option.

“Yes, absolutely, positively, I would do that,” Biden said. “The answer is yes, if we can’t move to increase the number of truckers, which we’re in the process of doing.”

The White House then clarified that if the National Guard does step in to help mitigate supply chain issues, it will be a decision made by individual states.

Governors in some states are considering or have called in the National Guard to ease labor shortages. In September, Massachusetts Gov. Charlie Baker sent some 250 Guard members to take driving duties in school districts that were reporting severe shortages of school bus drivers, in part due to the state’s COVID-19 vaccine mandate for public employees.

“Once it became pretty clear that there were going to be some communities shorthanded—it wasn’t going to be a vehicle issue, it was going to be people with [commercial driver’s licenses]—we started talking to the Guard,” Baker said.

While many Guard members do have commercial drivers licenses, governors who wish to deploy the troops to help with supply chain issue would have to avoid pulling the troops away from roles they already have in the supply chain, since they might already be using the transportation skill for their civilian jobs.

If the deployment did happen, it would likely be in states with some of the nation’s busiest ports. In California, the ports of Long Beach and Los Angeles are dealing with unprecedented supply chain bottlenecks, with more than 100 container ships waiting to get in.

“Shop early because these delays and bottlenecks are going to continue to the end of the year,” Mario Cordero, the executive director for Port of Long Beach, told Bloomberg News. “Hopefully, we’ll have some strong mitigating factors.”